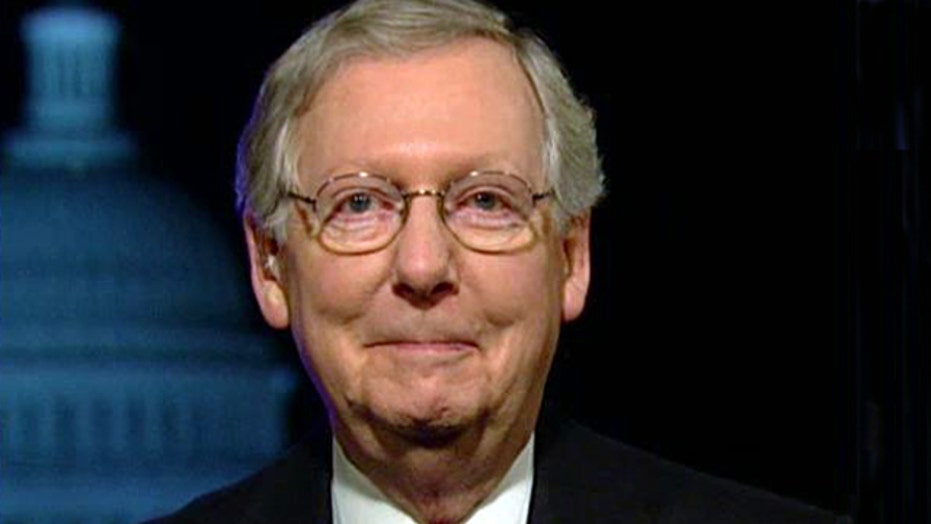 This is a rush transcript from "The Kelly File," March 13, 2014. This copy may not be in its final form and may be updated.

MEGYN KELLY, HOST: And in other news developing tonight, Republican senators are taking action to block a special White House tax exemption for some of the union supporters of the White House and ObamaCare -- one that saves these groups some money, but leaves others paying their bill.

And so, there was a lot of debate about whether the White House, the administration, would give the unions this gift in essence. John Thune was on the program earlier this week saying it's happened, the gift has been given. Can it be taken back?

SEN. MITCH MCCONNELL, R-KY., MINORITY LEADER: Well, you know, there have been special deals in the beginning, back during the bill's passage, there was the cornhusker kickback, you remember that? The special deal for Nebraska. Then the Louisiana purchase, this special deal for Louisiana, the Gatorade, this special deal for Florida. Since the law has been implemented, the president is willy-nilly delaying -- suspending portions of it over two dozen times. Now, it's the hardship exemption.

Well, look, the solution to this is to give the hardship exemption to everybody. And Republican senators believe that we ought to repeal the individual mandate and restore the money raised by repealing the individual mandate to the Medicare program, to restore Medicare advantage, and other programs for seniors that have been used to fund all of this.

KELLY: OK. But that is not going to happen with a Democratic president in the White House, with Barack Obama in the White House. So that's -- right now that's just talk. Is there any realistic -- you know, workout or end around, whichever you know the people want for this law?

MCCONNELL: Well, the roadblock is the Democratic Senate. You know, one thing the voters of America could do would be to make me majority leader next year. At least that way, we could get some of this relief on the president's desk. I mean, right now, he is protected from anything he doesn't want to do by a Democratic Senate, which enables him to do whatever he chooses to do.

KELLY: What do you think the likelihood is that that happens?

MCCONNELL: Well, I think the American people, you look at what happened in the Florida special election Tuesday, a race the Democrats were expected to win. They didn't. ObamaCare was a big issue in that race. I think we've got an excellent chance of turning the Senate around next year and taking America in a different direction. And at least even with the president still there, being able to get onto to his desk, things that would provide some relief from this catastrophe that has been inflicted upon all the American people through ObamaCare.

KELLY: Nancy Pelosi says that the Democrats should embrace ObamaCare, and that they are going to run on it, and it's not going to hurt them.

MCCONNELL: Good, I hope they do that. That would be a great debate this fall for the American people to respond to.