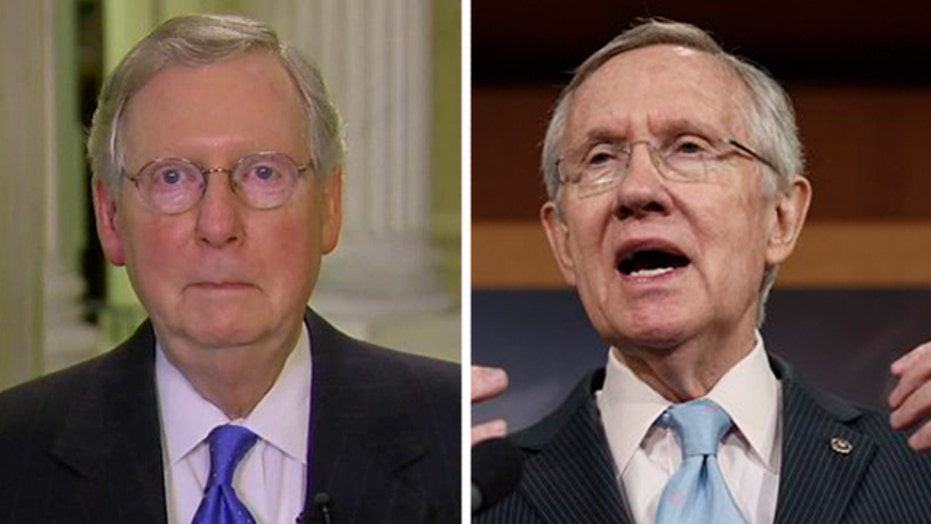 Reid says ObamaCare horror stories, 'all of them are untrue'

This is a rush transcript from "The Kelly File," February 26, 2014. This copy may not be in its final form and may be updated.

MEGYN KELLY, HOST: The second most powerful Democrat in Washington has touched off a firestorm after he attacked the integrity of those Americans who have dared to come forward to complain about ObamaCare. In the last few hours, the response to Senator Harry Reid's remarks on the Senate floor have been swift and fierce. First, listen for yourselves to the senator.

SEN. HARRY REID, D-N.V., MAJORITY LEADER: There are plenty of horror stories being told. All of them are untrue.

But in those tales, they turned out to be just that. Tales. Stories made up from whole cloth, lies, distorted by Republicans to grab headlines or make political advertisements.

KELLY: Senator Reid seemed to attempt to backtrack a short time later, but Senate Republicans were not having it.

The GOP communications center immediately releasing 100-plus cases of what they describe as real Americans pulled from a variety of news reports in recent weeks, all of whom they say have suffered very real and negative consequences thanks to ObamaCare.

Among the examples, a 31-year-old Kentucky dentist who went public after his policy was canceled and whose new plan nearly doubled his monthly premium and his out-of-pocket maximum.

A Kentucky mother who also lost her policy and complained about not being able to get a straight answer on whether her son's specialist was covered under the new plan.

There's a New Hampshire doctor who just found out that her hospital is not covered by the only ObamaCare insurer in her state.

And the New York woman, diagnosed with breast cancer, whose potentially life-saving surgery has reportedly been postponed after she lost her doctors under ObamaCare.

These stories and thousands of others like them have been coming to us from NPR, from the Associated Press, from The New York Times, from the network newscasts, from small-town papers across the country, not to mention those we brought to you directly.

And Senator Reid now suggesting they are all, these folks, lying to you. Using the New York Times, using us, using everybody. They're liars.

KELLY: Sir, good to see you here tonight. This is rather extraordinary for him to come out and level that accusation, in the wake of a very controversial law and legions of stories just like the ones we just outlined. Your thoughts on that.

These people all across America who are losing their policies, whose premiums are going up, whose co-payments and deductibles are going up, whose jobs are being lost, are not making this up. And no amount of Harry Reid calling everybody a liar changes the facts. Why in the world would people be calling us with these stories if they were not true?

KELLY: Is there some greater level of decorum expected of the Senate majority leader? I mean, he -- this is the man, the highest, most powerful man in the U.S. Senate. And he's basically calling any American who talked about their experiences under ObamaCare liars.

MCCONNELL: Well, I mean, it's certainly unacceptable rhetoric, particularly when it's obviously not true. I mean, how in the world could Republicans organize all of these constituents all across America to make stories up and send them to us? That is nonsense.

KELLY: But here's what I'm getting at. You know, you remember that infamous incident in which Congressman Joe Wilson called President Obama a liar. He said "you lie" during the middle of the president's remarks. And many on the left went nuts saying that was a breach of decorum, you know, within the House chamber, and he shouldn't have done that and it was out of order.

Now you've got the Senate majority leader calling all of these Americans, regular Americans who just happen to be speaking out about their experiences, negative experiences, as it happens, under ObamaCare, liars. Doesn't he have an obligation of decorum, in the same way Joe Wilson had one and breached it?

MCCONNELL: Well, you would think so. The president -- Harry Reid called President Bush a liar, too, a few years ago. I mean, he must think everybody who disagrees with him is -- is a liar. I mean, it's astonishing behavior. It certainly doesn't lend credit to the Senate, particularly for the majority leader, who is supposed to be the most significant Democrat in the majority, to use this kind of language.

I don't think it helps the Democrats, and it further underscores, I think, Megyn, their desperation. They're desperate, because every single one of them provided the vote that passed ObamaCare. It's been a disaster for the country, and they're afraid they're will be a price for it later this November.

KELLY: He came out later and said, "Well, I can't say that every one of the Koch brothers' ads are a lie," and he was tried to make it sound like he was only talking about the Koch brothers all along. "But I'll say this. The vast, vast majority of them are."

He's trying to turn this into it's just those evil Republican donors, the Koch brothers, I'm talking about. They lie, and the people in their ads lie. And then he went on to talk about Julie Boonstra, a woman from Michigan who was on this show last week, five years a leukemia patient, still struggling, who is very unhappy with ObamaCare, saying she doesn't like the new call structure on it, under it. And she's gone through a lot, thanks to the law, all of which she detailed.

The Washington Post gave her two Pinocchios on some of her claims. I pressed her on it. She defended it, came out and spoke about it. Her congressman, a Democrat in Michigan, pushed back and threatened the local TV stations, demanding more information to back up her claims, and so on.

The point is, he comes out, Senator Reid, and says -- look, he says that leukemia patient, everyone sympathizes with her struggle, but neither her bravery nor her suffering makes the words she utters true.

Will this have a chilling effect, do you think, on other Americans who just want to come out and tell their stories?

MCCONNELL: I don't think so. I think people are just going to be twice as angry about it to see the majority leader of the Senate calling them a liar. I think it's going to embolden more people to come forward. We know these -- these tragic stories are occurring all across the country. We hear about them every day. And I don't think they're going to be intimidated by Harry Reid.

KELLY: You know, this isn't the only instance of possible intimidation, or overreaching within the administration. We have been covering, and I know you've been following closely, the deal with the IRS. And this new rule that they proposed. It was going to solve all the problems. Of course, what it actually would do is basically codify the targeting of conservatives that got them into trouble in the first place.

Well, the rule is opened up for public comment. The public comment period is now closing. And where do we stand? Is this controversial new rule likely to take effect?

KELLY: So what's likely to happen?

KELLY: Mr. Minority Leader, great to see you. Thanks for coming on.