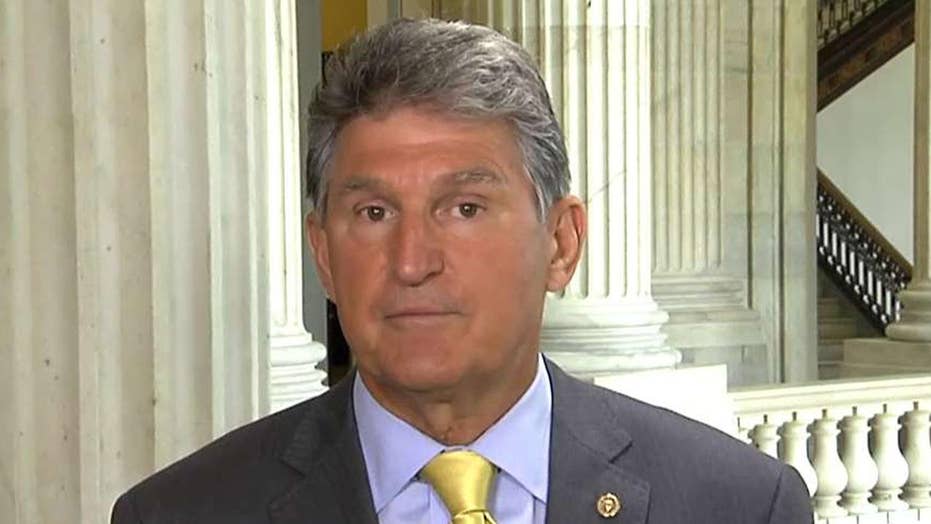 This is a rush transcript from "Your World," July 17, 2017. This copy may not be in its final form and may be updated.

NEIL CAVUTO, HOST: All right, protesters being led away outside Mitch McConnell's office, the Senate majority leader, who is trying to cobble together a number of Republicans to go ahead and vote for a measure that has proven controversial with moderates and conservatives alike, which means that somewhere in there might be the making of a deal, but not to these protesters, who say that Republicans are hacking it to smithereens and going to endanger the public health.

I don't know if that is the view of Democratic Senator from West Virginia Joe Manchin, but he joins us right now.

You're familiar with these kind of protests, Senator. They happen all the time, but they're picking up the pace right now. And those against what Republicans are putting up are saying that it's cruel and inhumane.

Do you think what they're concocting is cruel and inhumane?

What we're saying is, let's sit down and work through it. We know that the private exchange is in serious problems. And private markets are hurting. We can help there.

Also, we have people that we have given 20 million people the wealth of health care, and no instructions of how to use it in the most effective and efficient manner. So, we know there's great savings there.

But before you throw people off for the sake of saving, you ought to at least give them a chance to earn it and show them how to live a better quality of life. That's what we're trying to do, Neil.

CAVUTO: Now, this plan, Senator, keeps intact for the time being these taxes that are prominent in Obamacare, the Affordable Care Act, as we know them, on investment income and on the Medicare for the well-to-do. Are you OK with that?

The taxes, I think once you start removing any of the money before you start fixing the product in the market, if you will, you have got serious problems, because then you are behind the eight ball trying to catch up. And you are going to be hurting people and putting undue harm to them.

And just, we don't need to do that. There's some of those taxes they kept intact. The tax on the wealthy, 3.8, is staying, because there's a few other ones. They are still removing some other taxes too.

And still, with everything being said and done, they're still expecting about $700 billion in reduction of services or cuts to Medicaid over a period of time.

CAVUTO: You know what is interesting? The Senate Republican plan, as you are aware, Senator, actually doesn't go nearly as far as curbing the growth of Medicaid as the House plan does. So, it's obviously a lot more generous than Medicaid.

What is interesting about Medicaid and its explosion, its growth is that a lot of it, you could understand right after the meltdown in 2009 and 2010, that obviously a lot more Medicaid would go out to a lot more folks.

It never dialed back. And a lot of Republicans are saying that's proof that once a government program becomes within the system and grows within the system, it is almost impossible to dial it back. What do you make of that?

If you're not going to put some responsibility, and if I -- I used to -- when I was governor, I had a thing called mountain choices. I always told the federal government I should not be mandated to take care of a person who has hit hard financial times, but is very healthy, the way I needed to take care of a person who hit hard financial times that was unable to work and very unhealthy.

So, we tried to some put conditions in, and really some benchmarks that you had to go to healthy lifestyles, nutritional classes.

CAVUTO: Isn't that what Republicans are doing with Medicaid, sir?

MANCHIN: No. They haven't. They should.

CAVUTO: Democrats are saying that Republicans are gutting the program.

Is that fair, when it is still growing regardless?

MANCHIN: Well, they're gutting it when you're taking $700 billion of savings that have got to come from cuts.

And someone says, well, it's available. And I said, well, a Rolls-Royce is available. I just can't afford it.

CAVUTO: But we just said about Medicaid it's growing. It didn't dial back one iota, even through the economic improvement and when we got past the meltdown. It just still stayed there and everyone still is on it. And then you have to wonder, how is that supported?

MANCHIN: The thing of it is, Neil, we're not holding anyone accountable and responsible if they did get back into the work force, if there was a work requirement, if there's a way that you can earn.

I'm willing to look at all of these things we haven't even brought into the conversation. Susan Collins and I have spoken on the side, trying to find a pathway forward. But one else seems to really, I guess...

CAVUTO: Do you think this is going to pass? Your own views notwithstanding, sir, what do you think?

MANCHIN: I don't think it's going to pass. They're too far apart.

If you have got the Rand Pauls on one end, and then you have the Rob Portmans on the other end, you have got two different people pulling at the same thing in a different direction.