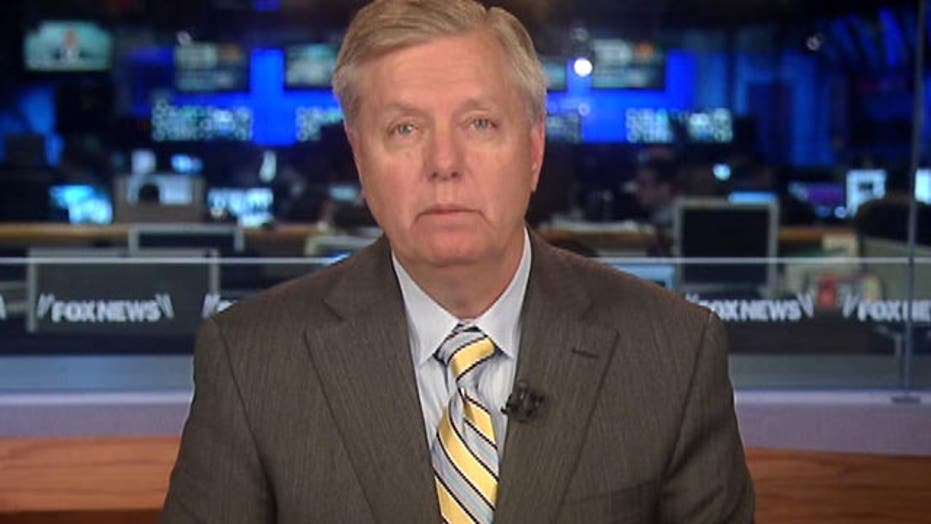 Sen. Lindsey Graham on why the fall of Ramadi to ISIS was a 'predictable outcome' in president's military strategy, 'propaganda' from White House and Pentagon and his June 1 announcement on his plans to run for the White House

This is a rush transcript from "On the Record," May 18, 2015. This copy may not be in its final form and may be updated.

GRETA VAN SUSTEREN, FOX NEWS HOST: U.S. Special Forces take out a key ISIS commander in Syria during an operation. Our heroes slipped over the border at Iraq, they took out the ISIS leader, captured his wife and killed 11 other ISIS fighters. At the same time, in Iraq, ISIS savages win. They got Ramadi.

VAN SUSTEREN: What does the win by ISIS in Ramadi say about President Obama's strategy and a bigger picture his foreign policy?

GRAHAM: OK, number one, it is a predictable outcome of withdrawing all forces back in 2011. Here's what I said, if we're not smart enough to work with the Iraqis to have 10,000 to 15,000 American troops in Iraq in 2012, Iraq could go to hell. I said that over and over again. The military advised him to leave 10,000 troops. When he refused to take their advice, everything you see before you is a result of that big mistake.

VAN SUSTEREN: The Pentagon said on Friday that the strategy to defeat ISIL is working. ISIL is on the defensive. I'm curious. Are they that unaware or are they trying to pull a fast one?

GRAHAM: They're trying -- that's propaganda coming out of the Pentagon and this administration. Here's the problem. The Iraqi's security forces have deteriorated the most effective fighting force inside of Iraq is Shia-backed militia, Iranian backed Shia militia, the Iraqi army has fallen apart, Anbar is in the hands of ISIL, the Sunni Arabs who live in Anbar Province believe that Baghdad, which is led by a Shia government, does not care about them. So taking Ramadi by ISIL really is a blow to political reconciliation. And it's exhibit "A" of the failure of Obama's military strategy. We don't have enough American forces in Iraq to change the momentum on the battlefield.

VAN SUSTEREN: Here's another problem I want to ask you about. President Obama's -- the plan he's trying to work out with Iran is two fold. One is the nuclear arms, trying to make sure Iran doesn't get a nuclear weapon. It's anticipated that the sanctions will be lifted, Iran will become incredibly flush with cash. If they're now controlling the government in Baghdad, if they are now controlling the Shia militia --

GRAHAM: Well, what we're doing is about to give cash to the most disruptive people in the Mideast. The money that we would give them under sanction relief won't go into building hospitals or schools in Iran. It will go to help Assad, the butcher of Syria. It will help Hezbollah, a terrorist organization that has attacked Israel over and over again. It will help the Houthies in Yemen now that al Qaeda in the Arabian Peninsula is now the most likely to attack us here in America. They're now on the loose because they've been driven out of Yemen. Any money we give them goes to the war machine for terrorist groups.

VAN SUSTEREN: It would be easier if they violated the nuclear weapons facility, we could take out the facility. And if we unleash all this money to them and it goes throughout the region, it's a destabilization. I don't know how you turn that around.

GRAHAM: Well, at the end of the day, they want a deal so badly, the Obama administration does, they're just about willing to do anything. I had an op-ed piece in the "Wall Street Journal" saying what a good deal would look like. No money until they completely submit to international verification. No money until there's "any time, any where" inspections of their military facilities, including military installations. And you never dismantle the inspection regime until they change their behavior. Those three things have to be part of any deal. But at the end of the day, giving the Iranians more cash, given their behavior of destabilizing the Middle East, is really nuts.

VAN SUSTEREN: Today, you were on another network.

VAN SUSTEREN: You tipped your hand. Is it, in fact, true you're running for president in 2016?

GRAHAM: On June 1st, in central South Carolina, where I grew up, right across from the liquor store that my family owned and we lived in the back until I was in high school, I will make an announcement about my intentions regarding running for president. I'm 99 percent sure I will do it, but I'm not there yet. But I invite you to come down to central South Carolina on June 1st, visit my home town. I'll be glad to talk to you about it.

VAN SUSTEREN: What goes into the 1 percent? I'm curious. What would be the 1 percent to pull you off this mission?

GRAHAM: I don't know what would be in that 1 percent. But I know this, I can't say anything until June 1st. I want you to come to South Carolina. There will be an announcement on June 1st and I'll explain my decision. I'd love to tell you a little bit about how I grew up in central and what makes me me. And, Greta, please come. I'd like to share my story with your audience. It would be an incredible day in my life. Only in America can you go from the back of the liquor store to the Senate and maybe one day to the White House.

VAN SUSTEREN: Indeed. It's quite a country. I should say that 1 percent probably is due to the SEC rules.

Anyway, Senator, thank you very much for joining us.

GRAHAM: You're a smart lady. Thank you.