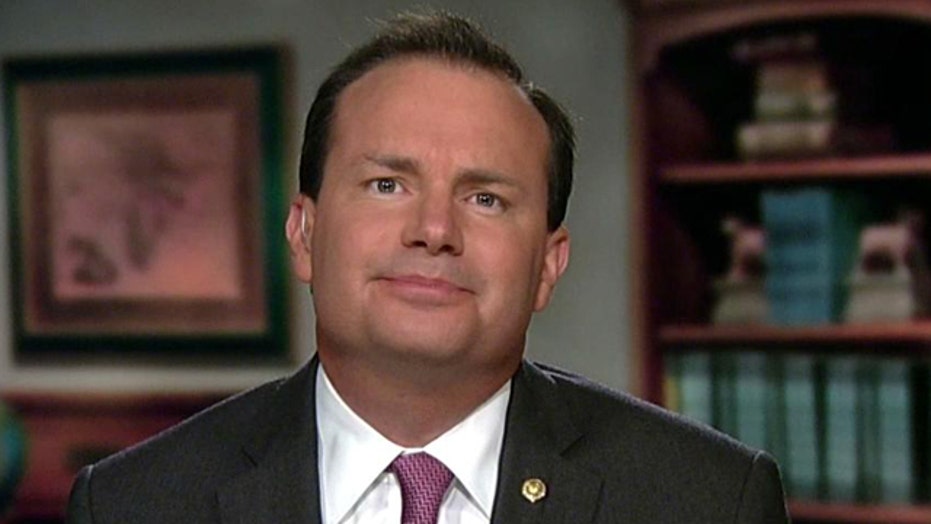 Sen. Lee: US involvement in Syria is a 'terrible idea'

How will a strike make Americans safer?

This is a rush transcript from "Hannity," September 9, 2013. This copy may not be in its final form and may be updated.

SEAN HANNITY, HOST: And joining us now with reaction, Utah Senator Mike Lee. Senator, welcome back. Good to see you.

SEN. MIKE LEE, R-UTAH: Thank you. Good to be with you.

HANNITY: Are we positive that, in fact, it was Assad that used the chemical weapons and not the rebels? Do we know for sure?

LEE: You know, I'm not sure any of us can know for sure, Sean. But based on the evidence I have seen it does appear that it was the Assad regime that did it. That in my mind is not the dispositive question, however. The dispositive question is how does this make Americans safer for us to get involved in a very bloody and protracted civil war in Syria? I have not ever heard an argument that this would make us safer as Americans to do it. And I don't think we ought to be getting involved in that civil war.

HANNITY: You know, there is a dispute between Secretary of State John Kerry and Vladimir Putin of Russia had to do with who we might ultimately be helping. Is it the more radical Islamists, Al Qaeda linked terrorists or the Syrian army, Syria free army, which we are told is more moderate although its leader has said Israel is their enemy? Who would we be helping?

LEE: Well, that's exactly the problem. No one knows. That's unknown and it's also unknowable at this point. And so, what we look at is the fact that a lot of the rebels, a lot of the opposition forces are people who don't like us very much. And should we get involved in the civil war and ever so gently tip the scales in favor of the opposition? And should that opposition in the end be led by those who really don't like us very much? It would be those people, those who have ties to Al Qaeda would be in charge of this massive chemical weapons stockpile. That would be bad.

HANNITY: All right. Let me go to the contradictions that have come up. And these are major, it's like the keystone cops are running this.

First, the president last week denied that a year ago he drew this red line. And he actually said you guys in Congress drew it. Then we had earlier the president called for a regime change two years ago. Now, they said this operation would not be about regime change. Then, John Kerry said that the attack will be unbelievably small. Then they walk that back today as they also walked back Kerry's statement that in fact, if they can avoid air strikes if they would let the world have these -- have control of the weapons. And that was Putin. Putin jumped in and said, all right, let's see if they will do that.

I mean, why so many contradictions? Why can't they get this story straight?

LEE: Well, I think they can't get their story straight because it keeps having to evolve because the American people aren't with them. And the American people aren't with them on this because it is a terrible idea. This would be really risky for America to weigh in on one side or the other in this awful civil war in Syria without a clear plan as to what we are trying to accomplish and without any clear explanation as to how this makes Americans safer rather than less safe.

So, faced with the reality, they allow their story to evolve. And they change it constantly. And the American people are fed up with it.

HANNITY: All right. So, the administration so far, John Kerry said that the military operation, the attack will be unbelievably small -- his words. The president said it would be days, not weeks. They also said no boots on the ground and it's not about regime change. What could possibly be accomplished with that military strategy being telegraphed?

LEE: You know, I'm not sure. It's a terrible military strategy as far as I can tell. On one question I have, is this really an unbelievably small attack from the standpoint of the brave men and women on our side who will have to participate in it, who will have to wage that effort? I think not. Will this be unbelievably small for those who might be killed in this effort? I don't think so.

And so, I think that reflects a certain cavalier attitude that most Americans regard as entirely offensive, and appropriately so. And so, these are some of the many reasons why the American people are overwhelmingly rejecting this president's idea to get us the American people mired and otherwise involved in a really ugly civil war in Syria.

HANNITY: What about Vladimir Putin in all of this? He's publicly called John Kerry a liar. He's moving Russian warships into the area. He's threatened to provide a shield for Syria. You know, and now he seems to be evolving into the great peacemaker in this process.

What do you make of America having sort of relinquished that role because Russia didn't have a very big role in that part of the world up until now?

LEE: Well, it's an interesting idea, the idea has been floated in the last 24 hours or so. I mean, obviously, we would all love it if we find a diplomatic solution to the stand-off, if there were a diplomatic non-military way of stopping Mr. Assad from using chemical weapons. I think we'd all be for that in one way or another.

LEE: But what remains to be seen is how they would propose to do this? How exactly do you take a thousand metric tons of chemical weapons that have been dispersed throughout the country of Syria and guarantee that it will be put into the right hands? Who was it in the international community exactly, who would be put in charge of this stuff, and how do we know we could trust them?

HANNITY: Senator, good question. Syria now has already said that they will surrender their chemical weapons. So, why do we even need to go to Congress at this point?

LEE: Yes. If that's the case, if they will surrender them. And if there is some means whereby they can be safe guarded and put in the hands of people who will not use them, then there is no reason whatsoever for the president to attack Syria. There is no reason for this administration to weigh in on one side or the other in the Syrian civil war.

HANNITY: All right. Let me go back to the free Syria army and their brigadier general, the leader, actually said, "Israel is an enemy country." And he went on to say, "I say it loud and clear. They occupy Syrian lands and until they withdraw from Syrian lands and recognize the legitimate rights of Palestinians" that they are still going be an enemy of Syria. Aren't they the ones that John Kerry and others keep telling us, are the moderate voices there? Does that not created a risk of a vacuum, a power vacuum that would be filled by extremists?

LEE: Yes. It begs the question what exactly is a moderate? If someone who would make statements like that, statements that are themselves fighting words. If those are moderates then who are the extremists and why on earth would we trust moderates like those, if that is somehow moderation? I think that defies logic and wisdom for us to head in that direction.

HANNITY: All right. Last question, Senator. Harry Reid was saying that a vote could come as early as Wednesday on this matter in the U.S. Senate. Now Reid has delayed that vote. Do you see that momentum is declining and going against the president on this like the American people, 70 percent are against?

LEE: Yes. I'm aware of one reason and one reason alone why Senator Reid would do that, Sean? And it's because the American people overwhelmingly against getting the United States involved in the Syrian civil war. Harry Reid knows it. And he knows that he doesn't have the votes in the Senate and there aren't the votes in the House to approve his military action right now. And there shouldn't be.

HANNITY: All right, Senator, we'll have you back again to talk about your effort to defund ObamaCare another night. I appreciate you being with us. Thank you so much.