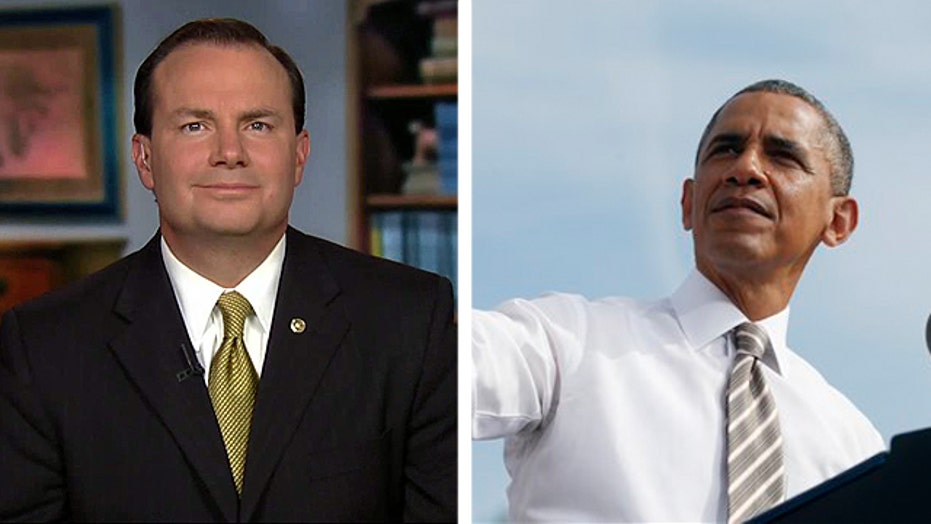 Sen. Lee on why the gov't should fight 'collusive spending'

This is a rush transcript from "Hannity," October 3, 2013. This copy may not be in its final form and may be updated.

SEAN HANNITY, HOST: Now, for years, President Obama has been preaching, we need civility in politics, but he may want to have a little chat with these democratic cohorts. Watch this.

PRESIDENT BARACK OBAMA: Only a more civil and honest public discourse can help us face up to the challenges of our nation.

SEN. HARRY REID, D-NV.: It's embarrassing that these people who are elected to represent the country are representing the Tea Party, the anarchists of the country.

OBAMA: I hope that we will continue to engage each other with the spirit of civility and seriousness that has brought us this far.

JAY CARNEY, PRESS WHITE HOUSE SECRETARY: They are attempting to extort the American people in many ways, and the economy in order to get their partisan objectives.

DAN PFEIFFER, OBAMA SENIOR ADVISER: What we are not for is negotiating with people with a bomb strapped in their chest.

REP. NANCY PELOSI, D-CALIF.: This is playing with the fire. Legislative arsonists at work.

REID: Doesn't take a genius to figure out that the proof is watching the House Republicans, because they have lost their minds.

OBAMA: I still believe we can replace acrimony with civility and gridlock with progress.

HANNITY: Wow. Well, you weren't hearing there, folks. Those are Democrats, you know, liken GOP members to suicide bombers, bombs strap on them, anarchists. Let's see, arsonists, extortionists, blackmail, terrorist, you name it, they got it all. Anyway, launching a Jihad.

Joining us now to respond to the pretty disgusting rhetoric is Utah Senator Mike Lee.

You know, first the obvious. What a phony hypocrite the president is. He goes, "We want them to think better of us." Remember, he said that at the memorial for Gabby Giffords -- not the memorial but for the memorial for the other people after the Tucson shooting?

SEN. MIKE LEE, R-UTAH: Yes, he did. And, you know, civility is a great thing. We need more of it in government. Apparently civility to them means, just agree with us. Just do whatever it is that we demand. And by the way, if you don't we'll call you an anarchist, an arsonist, and a terrorist and every other kind of bad "ist" there is in the book.

This isn't civil. This is the opposite of civility. And frankly, the president and the other people responsible for the statements should be ashamed to themselves. Especially because they are so utterly inconsistent with the manner in which they are behaving.

Let me go to Harry Reid yesterday. And what -- I like what the House is doing, the House has actually funded the national parks, D.C. and America's veterans and our V.A. and the NIH and our National Guard. They are passing all these bills to keep the government running. Now, the President says, he'll veto them. He won't negotiate with the Republicans. Neither will Harry Reid take these bills up. And Harry Reid is asked the question about one kid with cancer. Watch this.

UNIDENTIFIED WOMAN: But if you can help one child who has cancer why wouldn't you do it?

UNIDENTIFIED MAN: Why one against the other?

REID: Why would we want to do that? I have 1,100 people at Nellis Air Force base that are sitting home. They have a few problems of their own. This is -- to have someone of your intelligence suggest such a thing is irresponsible.

HANNITY: Why would I want to help one kid with cancer? Wow. Your reaction.

LEE: Sean, he's shocked, first of all, that someone from CNN would go off script and actually challenge him. This is not something that he's used to.

And this presents us with a painful but legitimate opportunity to re-examine the way we spend money in Washington.

HANNITY: What do you think -- how does the president explain this that he won't even negotiate? It's his way or the highway.

You know, look, I have often said this president's arrogant. But that's the height of arrogance, isn't it? Isn't that the way things work in Washington?

LEE: Yes. It's the height of arrogance and hypocrisy, the fact that he says that we are unreasonable. And meanwhile, it's only Republicans that have actually acted several times now to keep the government running. It's only governments that have acted first to prevent and now undo a government shutdown. We have acted again and again and again with some very bold, noble leadership from Speaker Boehner and from Majority Leader Cantor and others in the House of Representatives who have acted time and again to fund government. And yet Harry Reid and the Democrats in the Senate, they'll have nothing of it. Because again, they're telling us, unless you vote to fund everything including ObamaCare, they won't let us fund anything, even at current levels.

HANNITY: My way or the highway.

Now, it's very interesting, because the president is now taking this position where he won't negotiate which is kind of laughable because they're shutting down the government. I'm convinced, Senator, that he wants to bring these two issues together of the CR and the debt ceiling which is going to create a crisis. And the president was talking down the markets -- which I have never seen the president do before -- in an interview with CNBC.

Let's go back to the president in 2006, remind people what he said. First he said that, "The fact that we are here today to debate raising America's debt limit is a sign of leadership failure, it's a sign the U.S. government cannot pay its own bills. Over the past five years our federal debt has increased by $3.5 trillion to $8.6 trillion. That's trillion with a T. The rising debt is a hidden domestic enemy."

And then he said this during the campaign. Watch this. OK. Hang on a second. He said, this is when he called the Republicans unpatriotic and irresponsible for increasing the debt to $9 trillion. Now we are voting on a debt limit that's going to hit $16.5 or $17 trillion. Senator?

OBAMA: The problem is that the way Bush has done it over the last eight years, is to take out a credit card from the Bank of China in the name of our children, driving up our national debt from $5 trillion for the first 42 presidents. Number 43 added $4 trillion by his lonesome. So, we now have over $9 trillion of debt that we are going to have to pay back. Thirty thousand dollars for every man, woman and child. That's irresponsible. It's unpatriotic.

HANNITY: I guess his $17 trillion by his own words makes him irresponsible and unpatriotic. Is that fair?

LEE: Yes, you know, Sean, I think I would have gotten along much better with Senator Obama than I do with President Obama. I like some of the stuff that he was saying. I like that fact that he was pointing out. This is a real risk to us, this is more than just a hypothetical problem. This is a national security threat to America. And the fact that we keep adding to our national debt that's already unsustainable, making it even more unsustainable, is something that we ought to be really concerned about.

And now he's telling us, we have no choice but to do it. Now, he's telling us that we are unpatriotic if we even raise a question about it. If we even attach conditions to it to make sure that we are not back in the same position just a few months later.

HANNITY: Yes, Senator, I think the worst thing Republicans in the House can do at this point is give in to this president bully, this arrogant president that won't even negotiate. I think it would be a very bad precedent if they allow him to get away with this. I like what they are doing passing individual bills. Do you support that strategy and do you have anything to add to it?

LEE: I support them wholeheartedly. Just moments before I came into the studio I was on the phone with my friend Jim Bridenstein from Oklahoma. He's a real champion of this effort. And he told me that there is a very strong support base within the House Republican rank and file. They support Speaker Boehner and Majority Leader Cantor and what they're doing.

There is a real unified caucus behind this effort. They understand this is a fight worth fighting. We have to protect the American people from the harmful effects of ObamaCare while bringing an end to this senseless, needless shutdown of all these programs that have nothing whatsoever to do with ObamaCare.

HANNITY: All right. Senator, keep up the good fight. Tell those guys, hold the line. Don't give in to the bully.

HANNITY: Thank you. Appreciate it.