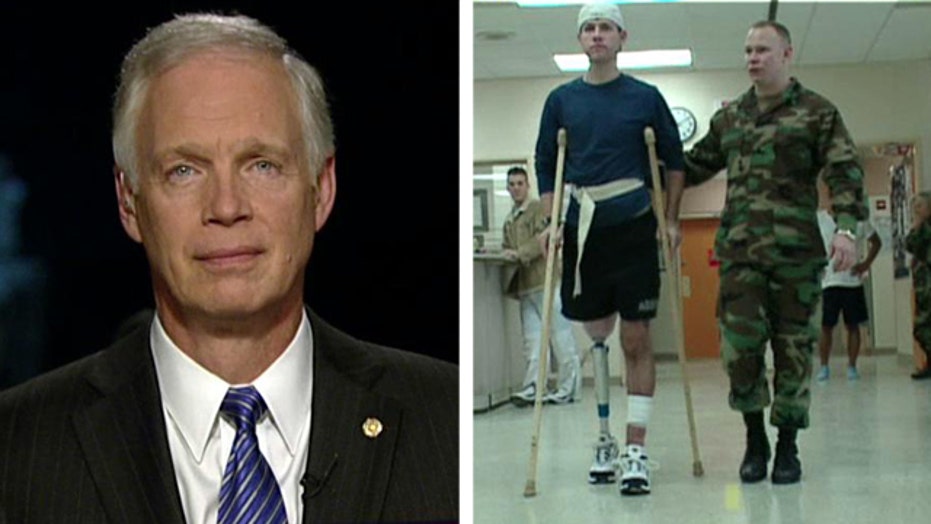 This is a rush transcript from "The Kelly File," December 18, 2013. This copy may not be in its final form and may be updated.

MEGYN KELLY, HOST: Joining me now, Wisconsin Republican Senator Ron Johnson who voted to approve this budget deal today. Senator Johnson, let me start with this, I give you credit for coming on. Because we called a lot of people who voted for this, and to be perfectly honest, they were cowards. They didn't want to come out and defend it. And you did. You're a stand-up guy. So defend it. Because people are really upset about this.

SEN. RON JOHNSON, R-WIS.: Well, first of all, I'm not going to defend the cut in the military pensions. I mean, it's outrageous that Senator Harry Reid would not allow us to offer an amendment to take care of that. And so, you know, that is the worst part of this compromise deal. I'll tell you why I voted for the compromise deal. Megyn, it is impossible to convey the dysfunction that is Washington that's in the United States Senate. And, you know, that dysfunction causes all kinds of economic harm.

I didn't want to see another government shutdown. And so, you know, this agreement at least prevents government shutdowns through fiscal year 2015. But I will tell you where there is bipartisan agreement. And it is in honoring the promises to the finest among us. I'm going to work tirelessly to make sure that part of the bill is reversed. There is plenty of areas in the federal government where we can find $6 billion.

KELLY: And wounded veterans have to take this?

JOHNSON: I have Tom Coburn's, his fourth waste book, this book alone shows $30 billion per year in discretionary waste.

KELLY: All right. That explains. But help us understand, Senator. You voted for that. So, all that waste, you just voted for. And if there's the willingness to fix this later, why did they cause the problem now?

JOHNSON: Megyn, we didn't get an opportunity to put any kind of amendment to fix it. This was an up or down vote. We had one shot. And, you know, again, I didn't like that --

KELLY: Then why wouldn't you say no? I mean, just explain for the folks at home if it's yes or no, why not say no, this isn't good enough because you are screwing over the vets?

JOHNSON: Because our economy is hurting from the dysfunction in Washington, D.C. And one of the things this thing actually does is give us a budget number so that agencies, departments and committees in Congress can actually start rationally prioritizing spending, look for areas of waste and start eliminating them. So, this Congress actually starts doing its job.

So, I just thought it was about time to provide a little bit of certainty, just a little bit to our economy so that we can provide some confidence to business leaders so they can actually create the jobs.

KELLY: OK. Let me jump in. Because we have only a minute left. Senator Patty Murray, a Democrat and Congressman Paul Ryan put this together, a Republican. And she came out now, she negotiated the deal. All right? So, she's very actively involved in these trade-offs. And she says, included the wounded veterans. You know, basically cutting --

KELLY: "But that was a mistake. That actually was a mistake." She negotiated this. This makes the American people feel like the people inside the Beltway don't know their, you know what, from their elbow.

JOHNSON: That's right. It's impossible to convey how dysfunctional this place is. You know, this is a terrible process. I'm a manufacturer. If you don't have a good process, you have a terrible products. And so, what I'm trying to do is bring some functionality. And I'm quite confident -- first of all, Patty Murray guaranteed us she will fix the wounded warrior technical correction here. But I'm pretty confident that we'll find $6 billion in other mandatory savings. This thing doesn't kick in until 2015. And so, we have got time. We have a lot of piece of legislation. We'll correct this. That's certainly my guarantee to the finest among us, the people that protect our freedom.

KELLY: Good for you for coming on and talking about it, Senator. Seriously, we appreciate it. All the best to you.

KELLY: You too, sir.