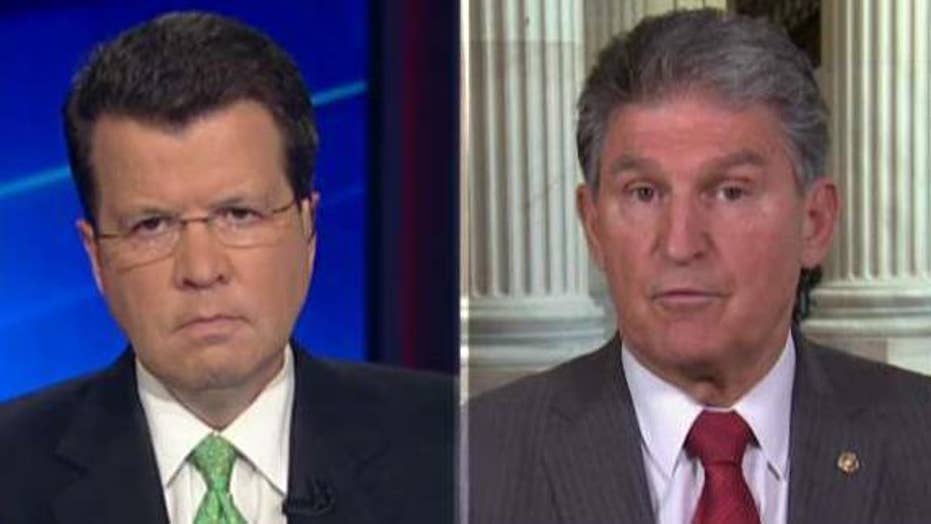 Sen. Joe Manchin: There is not going to be a witch hunt

The Democratic lawmaker talks about his confidence in Mueller

This is a rush transcript from "Your World," May 18, 2017. This copy may not be in its final form and may be updated.

We have got the two-minute warning.

Do you think that this -- there will be rapid progress on this investigation, especially with Mueller in charge here?

That was the indication. We just came out of a briefing. I think Director Rosenstein was very clear that Mr. Mueller has unfettered access that he can do and run this investigation the way he chooses. He will have the resources to do it and he thinks it's going to get going real quickly and it will be well-done.

CAVUTO: Do you get a sense, though, as we wait, that the president is stymied by this, though, Senator, that this could be such a huge distraction, it could be, as someone was saying, a summer bummer?

MANCHIN: Neil, we already have one heck of a distraction going on now.

MANCHIN: I would think that, as the president and the White House, having someone the stature as Bob Mueller would get this done in an expedited matter, get -- unturn all of the stones, if you will, see everything, and let's move on and do the business of this country.

I would think they would want to get this done, Neil.

CAVUTO: All right, very quickly, we're also learning the markets were down a little bit today, Senator. But there is a fear that tax cuts, any of that stuff could be significantly delayed.

That's something we -- you know, we need infrastructure. Infrastructure is going to have to have a tax overhaul. We have a $20 trillion debt we have got to deal with. These are things that can be done.

We have got health care we have got to deal with. These are all things that are fixable. And we can do it if we work together as Americans and quit fighting each other about being a Democrat and Republican and quit all the other crap.

There's not going to be a witch-hunt, I can assure you. I will not partake in anything such as that. I'm on Intel Committee. We are going to find the facts out and go whatever the intel and facts take us to the truth. We have confidence in Mueller.

I think that Rosenstein is a very dedicated, tough professional. So, let these people do their job and let's work with them.

CAVUTO: Senator, Claire McCaskill -- I think it was Claire McCaskill -- was not a big fan of the possibility of Joe Lieberman being the next FBI director, that a politician or someone who had elected office shouldn't be considered for that job. What do you say?

Joe Lieberman is an absolutely wonderful human being. He's my dear friend.
OK? And I think the world of Joe Lieberman.

And I would just subscribe right now during these times exactly what Lindsey Graham said. Maybe it should have someone that has no political connections whatsoever, someone comes out of the professional ranks. Maybe that's where they should go.

But let me be very clear. If they don't, and Joe Lieberman is the man, I'm going to vote for him.

CAVUTO: So, if he is, and even though that's not your choice, it's someone who have -- from a political background, you would still support whatever he wants to do?

MANCHIN: There's not a finer human being than Joe Lieberman. OK?

With that, also, I agree with Lindsey Graham. The difficult times we're in, the challenging times we're in, if they can find that person, if they can pull that Bob Mueller out of the ranks of the professions that doesn't lean right, left, you don't know whether they're Democrat or Republican, that's probably what we need right now.

MANCHIN: But that's not my call to make.

And I will -- and the only thing I have said, if Joe Lieberman is there, his friend Joe Manchin, who knows him very well, is going to be with him.

CAVUTO: You know, yesterday, or this morning, sir, the president said -- tweeted out that this is the single greatest witch-hunt of a politician in American history.

MANCHIN: I will have to disagree.

I can only -- I can only speak about the people I know and how they're talking.

MANCHIN: And I don't see anybody, I haven't seen anybody with -- all lathered up, if you will, it's a witch-hunt, and we're going after them.

MANCHIN: I don't see that.

CAVUTO: All right, Senator, thank you very much.