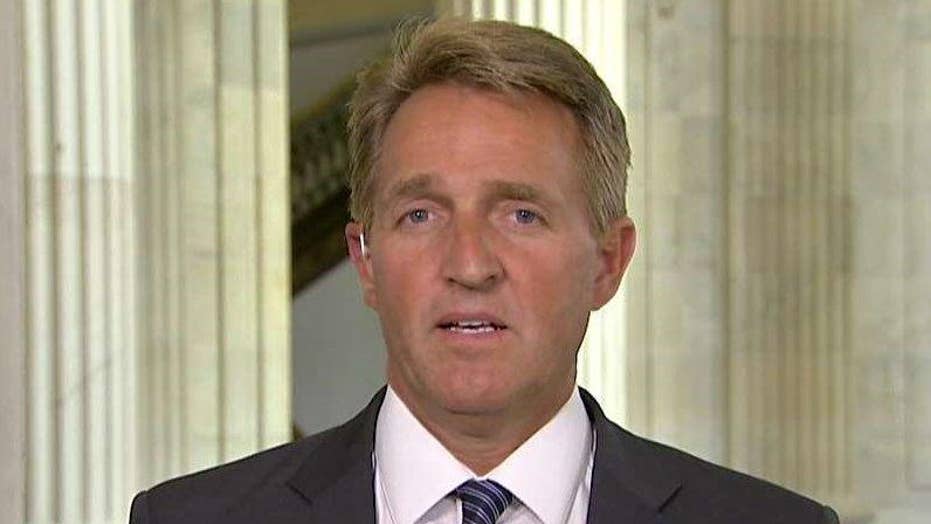 Arizona senator details the event on 'Your World'

This is a rush transcript from "Your World," June 15, 2017. This copy may not be in its final form and may be updated.

STUART VARNEY, HOST: The next guest was on that field yesterday when those shots rang out. He will be playing in tonight's game.

You visited Congressman Scalise and helped him at the game. What can you tell us?

SEN. JEFF FLAKE, R-ARIZONA: Well, I don't have anything to add, other than what the doctors have added. We were able to talk to family last night and be at the hospital.

Obviously, it's a tough road ahead. It's a very serious injury. He's fighting hard. And he -- I -- we're just all hoping for the best.

VARNEY: But would you tell us one more time, sir, what you did for Representative Scalise after he was hit yesterday?

FLAKE: Well, he was one of the first ones shot.

It was only after the shooter was down that we could run out. And so I ran out. I think I was the first one to him. But then Brad Wenstrup, from Ohio, a congressman who is a doctor, joined me there. And we applied pressure to the wound for probably 10 to 15 minutes until the medics could take him away.

But he was obviously in tough shape. And it was a heroic thing just to drag himself off the infield.

VARNEY: It sounded like combat from the videotape that we actually saw and from your description of it.

What do you make of the suggestion that lawmakers like yourself should be carrying a gun to defend yourself vs. increasing the level of support security for all 535 members of Congress? Which side of this debate do you come down on?

FLAKE: I don't know if there's a side to that debate.

I know that, in the coming days and weeks, we will be obviously talking about this. I don't think we can have a situation like we did yesterday happen again, where there's a collection of members. Had Steve Scalise not been there with his security detail, then it would have been much, much, much worse.

And so I do think that we will see what we can do to change the situation. But I wouldn't want to say just one day after the tragedy that we have it figured out.

VARNEY: Sir, I wanted to bring this to your attention. One day after calling for unity, House Minority Leader Nancy Pelosi saying this. Roll tape.

REP. NANCY PELOSI, D-CALI., HOUSE MINORITY LEADER: One of the people that went to jail for threats to -- eventually, when they finally found him, because he was very resourceful in hiding, when he was being tried, his mother said, "He just watches too much FOX TV."

VARNEY: Now, Senator, Nancy Pelosi did say that she was personally heartbroken. She went on to blame Fox TV in part for this.

FLAKE: Well, I didn't hear the context or I couldn't really hear that very well when she was saying it just now. So, I don't want to judge or get -- wade into that at all.

I just hope that we can all step back from heated rhetoric on all sides. And I'm glad that we're playing the game today. That's one of the best bipartisan institutions around here, this congressional baseball game. So, I'm glad we're all going to be there.

VARNEY: A million dollars has been raised already for the game. It was $500,000 in total last year.

VARNEY: You have a shot at making some serious money for charity tonight.

Well, it is. I think we were told we were just over $600,000 a couple days ago. And, all of a sudden, there's obviously a big boost and a big interest.

FLAKE: I can tell you that.

FLAKE: Who -- who do this as a very weak part-time.

We played the other day on one of the fields we helped build with this charity for inner-city kids that have fewer opportunities. And so these are great charities that we're helping here. I'm glad people are coming out.

VARNEY: A little pressure on your game tonight.

VARNEY: Senator Jeff Flake, thanks for joining us, sir. Appreciate it. Thank you.