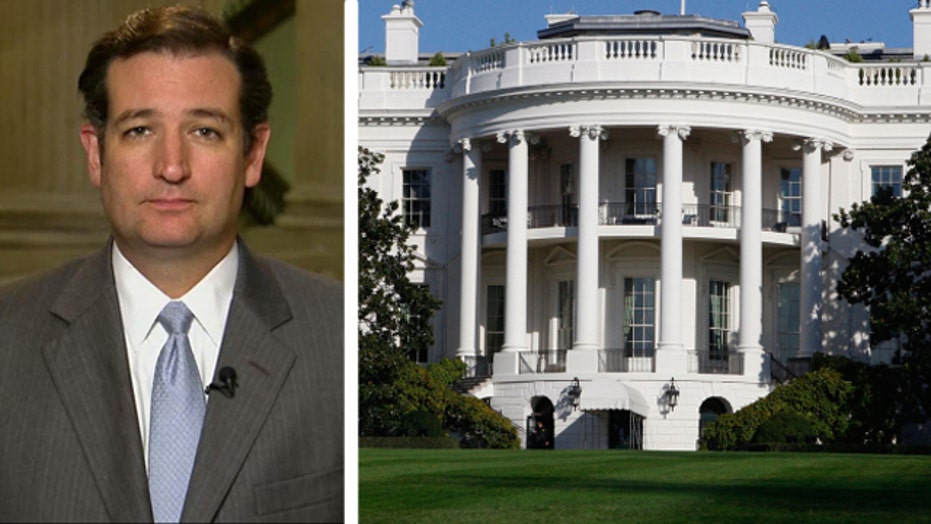 Veterans should not be held 'hostage' in gov't slimdown

This is a rush transcript from "Hannity," October 2, 2013. This copy may not be in its final form and may be updated.

SEAN HANNITY, HOST: Tonight, President Obama summoned the top four Congressional leaders to the White House, but after more than an hour of talks, nothing was accomplished. And once again, it was made clear the Democrats will not even negotiate, not even talk to Republicans. Watch.

REP. JOHN BOEHNER, R-OHIO, SPEAKER OF THE HOUSE: They will not negotiate. We had a nice conversation, a polite conversation. But at some point we've got to allow the process that our founders gave us to work out.

SEN. HARRY REID, D-NV., SENATE MAJORITY LEADER: And he says no. All I want to do is go to conference on a short-term CR. We have a debt ceiling staring us in the face and he wants to talk about a short-term CR?

HANNITY: Our way or the highway. Meanwhile over on Capitol Hill, tempers were flaring with lawmakers shouting. And of course irresponsible rhetoric from the left was on full display. The worst example comes to us courtesy of Democratic California Congressman George Miller. Watch this display.

REP. GEORGE MILLER, D-CALIF.: Did you think about the parks when you voted to shutdown the government? Did you think about the impacts? The gentleman from Montana yesterday came to the floor and said it's hurting the local economy. The gentleman from California came and said, the towns around Yosemite. Was he thinking about that when he voted originally to shut down the government? He was prepared to sacrifice the local economy. He was prepared to sacrifice the towns around Yosemite when he was on his Jihad against American citizens getting access to health care.

And just a few hours before that outrageous comment, when asked about a funding compromise for the National Institutes of Health, well, listen to this, Senate Majority Leader Harry Reid said, saving a child with cancer is not his priority. Why would he want to do that? Take a look.

REPORTER: But if you can help one child who has cancer, why wouldn't you do it?

REID: Why would we want to do that? I have 1,100 people at the Nellis Air Force base that are sitting home. They have a few problems of their own. This is -- to have someone of your intelligence suggest such a thing maybe means you're irresponsible and reckless.

Now, that's not all. We are also seeing firsthand the devastating impact this liberal shutdown is having on real American heroes both yesterday and today. Veterans had to move barricades to gain access to the World War II memorial in our nation's capital. Earlier tonight, the Republican-led House did passed legislation that would fund parts of the government, including our national parks.

But is Harry Reid and the Democrats, they're going to take it up that legislation in the Senate? Well, I think those chances are slim to none.

Nevertheless, the GOP, they are still trying to help out those heroes. Earlier today, Reince Priebus, the head of the RNC announced that he and the RNC is willing to pay to keep the World War II memorial open for the next 30 days.

But of course, typical fashion, that's not negotiable. Democrats called it a stunt.

Joining me now with reaction to this and much more, we have a busy night on "Hannity," is Texas Senator Ted Cruz.

I don't even know where to begin here. So --you're shaking your head. Go ahead.

SEN. TED CRUZ, R-TEXAS: Look. This is Harry Reid's shutdown. It is the perfect example of liberal arrogance. Four times the House of Representatives has endeavored to compromise, to pass the bill that funds the entire federal government, but at the same time prevents the enormous harms ObamaCare is causing to millions of Americans.

And four times, Harry Reid has said, pound sand, go jump in a lake. He won't negotiate, he won't talk. He told the president, don't talk to Congress. I mean, apparently their view is, the president should negotiate with the nation of Iran but not with Congress. That's just unreasonable, it's ridiculous and that's what their position is.

HANNITY: Why would we want to help one kid with cancer? Do I even have to begin to answer that? I mean, if you want to talk about cold, callous, heartless, mean-spirited, hateful. All the rhetoric that Harry Reid recklessly throws around against Republicans, it fits him. Your reaction to that?

CRUZ: Well, look, it illustrates what's really going on. As you know, the mainstream media all reads the White House's talking points. So, they all repeat, this is the Republican shutdown. And it's why what is happening now is so important. We saw a couple of days ago the Senate unanimously passed a bill funding the men and women of the military, saying we are not going to hold your paychecks hostage the way Harry Reid and President Obama have been threatening to do for weeks.

Now tonight, the House of Representatives have passed a bill funding the national parks, funding the national memorials. Harry Reid suggests he's going to kill that because he wants to keep the Statue of Liberty closed, he wants to keep the World War II memorial closed. There is another bill that the House is expected to pass tonight to fully fund the V.A. that we need to stand by our veterans, the commitments we have made. From what Harry Reid has said, he's going to kill that tomorrow.

HANNITY: So, wait a minute. I want to understand this. So, all this casual cruelty of Harry Reid, he's going to subordinate literally compassion and decency for partisanship? He won't keep the parks open. He won't allow the vets to do go to World War II? He's not going to fund the NIH even if it's going to help one kid with cancer? I mean, that's pretty sick. What a twisted old -- sorry.

CRUZ: Sean, there are two things going on. One, Harry Reid and President Obama believe the shutdown benefits them politically. So, they don't want an end, they like this shutdown. But number two, they don't want to open the V.A. because Harry Reid wants to hold veterans hostage in order to force ObamaCare on everyone.

And let's be clear, the bill that the House is going to vote out tonight doesn't even mention ObamaCare. It's simply says, we should continue to fund the V.A. because whatever happens in the shutdown, our veterans should not be held hostage.

And apparently, Harry Reid's standard is he thinks veterans don't deserve the same treatment that men and women of the active military do. That's just not right. We need to honor those commitments. And we need to put the partisan politics of Barack Obama and Harry Reid behind us.

You know, just two days ago President Obama gave a list of all of the negative things that would happen in a shutdown. That he wouldn't pay the border patrol, that he would shut down NASA, that he shut down the national parks, and then he would shutdown much of the V.A.

What the House is doing is saying, Mr. President, we have heard your priorities. We are acting in a bipartisan manner to fund the priorities you laid out, Mr. President, in a national speech. And Harry Reid is saying he's going to kill them because he wants everything shutdown.

Now we find out the Obama administration knew about the World War II veterans' requests, they rejected it and they sent more guards to the World War II memorial today than they did to Benghazi on September the 11th 2012.

CRUZ: Well, Sean, I don't think anyone is surprised. Although, I think we are saddened everyday by the political gamesmanship with this administration. This is a president who is, you know, who during sequester furloughed air traffic controllers. Because he figured if people -- his flights were delay, it would inflict the -- pain.

HANNITY: He shut the White House down to children. Michelle Obama is whining that she can't tweet. Twitter has nothing to do with the White House or the budget! "I'm sorry you're not going to hear from me, but the government shutdown is not going to allow me" -- she doesn't do her own tweeting? Sorry, you may have to punch a few buttons there, First Lady.

HANNITY: How do they get away with this? "We're not going to talk to you. Our way or the highway." That's pretty much what it is. And if it means kids with cancer suffer, means World War II vets suffer, they don't care. Is this the party of compassion, love and decency? Because they claim to have a monopoly on those things, you know?

CRUZ: They live in the D.C. bubble where it's all about brute political power. Listen, what this fight is about making fundamentally, Sean, is making D.C. listen to the people.

You know, we wouldn't be here if over two million people hadn't gone to dontfund it.com, signed a national petition and forced our elected officials to listen to us. And you look at the millions of Americans who are losing their jobs, who are being forced into part time work, who are facing skyrocketing health insurance premiums and who are at risk of losing their health care because of ObamaCare. What Harry Reid and President Obama are saying is, "We don't care about you. We're going to grant exemptions for the rolling class, for big business and members of Congress but not for hardworking American families." That's wrong. And that's what's going on here.

HANNITY: What a sick, twisted old man to say, why would we -- why would we want to do that? And help a kid with cancer? Pretty heartless. I got to tell you. Pretty sick. Good to see you, Senator.

CRUZ: I think it reflects Senate and unfortunately partisan priorities.

HANNITY: Partisanship trumps everything in the world of Reid and Obama. Sad.

All right. Thank you so much for being with us.