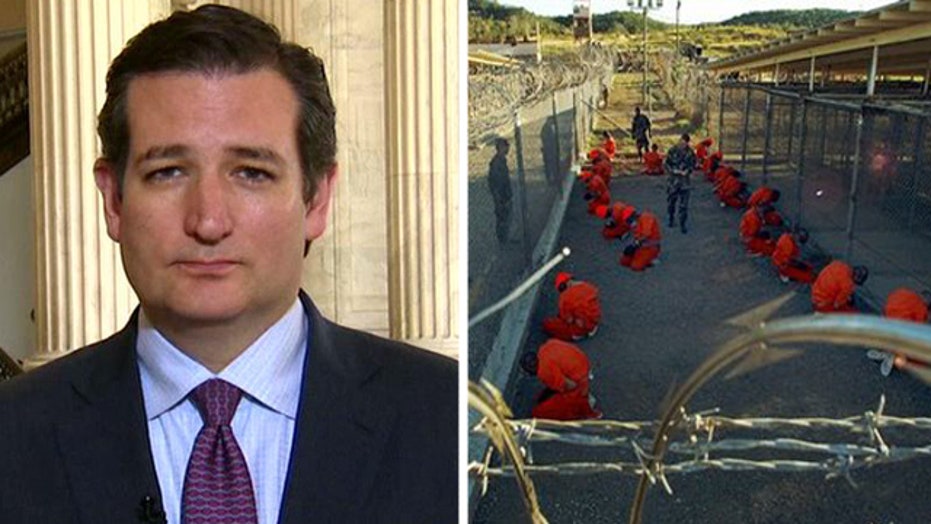 Cruz on bill to temporarily halt transfer of Gitmo detainees

This is a rush transcript from "The Kelly File," June 11, 2014. This copy may not be in its final form and may be updated.

CHUCK HAGEL, DEFENSE SECRETARY: The intelligence community has said clearly that these five are not a threat to the homeland.

MEGYN KELLY, HOST: Well that was Defense Secretary Chuck Hagel hours ago in the first public hearing on the prisoner swap that free the American soldier Bowe Bergdahl in exchange for five top Taliban commanders. Secretary Hagel repeating a line we've heard a lot in the last 10 days.

PRESIDENT BARACK OBAMA: I wouldn't be doing it if I thought that it was contrary to American national security.

HILLARY CLINTON, FORMER U.S. STATE SECRETARY: These five guys are not a threat to the United States.

SEN. HARRY REID, D-NEV.: I'm glad to get rid of these five people, send them back to Qatar.

JOHN KERRY, SECRETARY OF STATE: I'm not telling you that they don't have some ability at some point to go back and get involved but they also have an ability to get killed doing that.

KELLY: Joining us now, Republican Senator Ted Cruz of the state of Texas. Senator, good to see you tonight. And so, your response? I mean, you've got the president, the Senate majority leader, the presumptive Democratic nominee, Hillary Clinton, the secretary of state all saying, assuring the American people that these five guys do not pose a legitimate threat to America.

SEN. TED CRUZ, R-TEXAS: Well, Megyn, that is stunning to see. Because what we've seen happen here is the president of the United States has negotiated with terrorists to released five senior Taliban terrorists and what they're saying -- they are all reading the Democratic Party talking points, but what they're saying is not backed up by the facts. All five of these were senior members of the Taliban, which was intertwined with al Qaeda, who I know no one needs reminding on September 11th, 2001 murdered merely 3,000 people on the American homeland.

And these terrorists, our young men and women, our soldiers went and expended blood and treasure to capture these five senior terrorist. They were high priority targets. We captured them and by releasing them, you know, the president made one very candid admission. When he was ask he said it was quote, absolutely possible that these five senior terrorists would return to actively waging war against America. We're still fighting the war. The Taliban today is fighting against the men and women of our military trying to kill Americans today.

KELLY: But possible isn't the same thing as probable. And what Hagel said today, what Secretary Hagel said today was that there was complete unanimity on this decision among the secretary Of state, the attorney general, the Department of Homeland Security chief, the Director of National Intelligence Clapper who by the way a few years ago said he was -- we all know what's going to happen if we release these guys, and he didn't mean rainbows and unicorns. And the chairman of the Joint Chiefs of Staff. Now the chairman of the Joint Chiefs is telling the president, don't worry about it and you're the president, why wouldn't you listen to all those people?

CRUZ: Listen, number one, this was a decision that was made at the political level. We know that the commanding generals, we that the senior military leaders other than the top political players were not involved in this decision. And, you know, if you want to know the reaction, look to the reaction of the Taliban. Senior Taliban leaders had been quoted saying that this release is a huge victory for the Taliban, it's the equivalent of 10,000 new Taliban soldiers arriving to fight against America. And indeed, senior Taliban commander have also said, that this now gives them an enormous incentive to go and capture other Americans soldiers because it's -- the Taliban commander said, it demonstrates the value to such a quote, rare bird as a soldier that you can trade for senior terrorists.

KELLY: What about who is responsible? Because originally the president rolled out the news in the Rose Garden with Bowe Bergdahl's parents, and then we heard when lawmakers, such as yourself got briefed on Capitol Hill, the deputy National Security advisor refused to say that the president made this decision, would not go that far despite being repeatedly pressed. He would only put it on Hagel. Then when secretary Hagel testified, he said it was the president. The president seems to have acknowledged implicitly that he made this decision. So, why is the deputy National Security adviser trying to spin lawmakers that it was all -- it was Mr. Hagel?

CRUZ: Well, because unfortunately, National Security and the Obama administration far too often has treated as a matter of partisan politics. Look, these are the same people that in Benghazi focused all on this story about a silly internet video rather than the fact that terrorists attacked and murdered four Americans, including the first U.S. ambassador killed in duty since 1979. It's all politics all the time whether it's President Obama.

CRUZ: Well, the White House has a pattern, which is when it engages in action, particularly extreme action, it prepares its people with talking points to vilify anyone who disagrees. So, it was obvious when the president held the ceremony at the White House with the parents of Sergeant Bergdahl -- and it was a moving ceremony. And it was any time you see the parents of a soldier whose been held in captivity welcoming their child back, your heart leaps for them. And I think the White House believed that they could embrace that moment and that anyone who raised concerns about these senior terrorists being released, they would just vilify as you don't care about our soldiers.

What they didn't count on was that so many other soldiers who served with Sergeant Bergdahl decided they had to speak up and speak out against this deal, and they didn't count on the American people understanding, yes, we should always stand with our soldiers, we should never leave a man behind and indeed maybe we should have gone in with military force to rescue Sergeant Bergdahl. But it doesn't mean we should release senior terrorists who could attack or murder other Americans and indeed one question, Megyn --

KELLY: Was the price too high? That's what they are asking.

KELLY: Two other things I wanna get to with you quickly, we've been talking tonight about the immigration situation along the southern border. Of course, you're from Texas and this has been described even by the president as a humanitarian crisis. Darrell Issa came out and suggested that children may die, they may die as a result of this influx that we're seeing and we cannot handle. What do you believe should be done with the now, what, upwards of 90,000 children expected to cross the border in a year where we expected 6,500?

CRUZ: Well, Megyn, this is a humanitarian crisis and it is direct result of President Obama's lawlessness and unwillingness to enforce the law. In 2011 there were roughly 6,000 unaccompanied minors that came across the border. This year it is expected there would be roughly 90,000, next year they're projecting up to 145,000.

It's important to understand what caused this. This was caused by in the summer of 2015 President Obama unilaterally and illegally granting amnesty to some 800,000 people who were here illegally who came as children. And what that has prompted as parents throughout Central and South America, giving their young children, handing them over to smugglers -- and it's worth emphasizing, Megyn, these are transnational global criminal cartels and parents are giving them teenage girls, teenage boys, these boys are subject, these girls are subject to physical assault, to sexual assault, to being sold in the prostitution. It is horrific and it's because the president won't enforce the law, and our hearts should be breaking.

KELLY: So they don't think -- I got to ask you this before I let you go. So, you had dual citizenship, Canadian and United States and you decided to date us exclusively. So, that's nice to hear. Why did you do that, and does this mean you're gonna run for president?

CRUZ: Well, as you know, I was born in Canada. My mother was an American citizen by birth and so under U.S. law, I'm a U.S. citizen by birth. I had been told as a child that I did not have Canadian citizenship because I had to affirmatively claim it. I discovered in the last year that was incorrect that in fact, I had both. And so, when I was made aware of that, it struck me that serving as the U.S. senator, representing 26 million Texans, that I should be an American and only an American. So, I made the decision to renounce my Canadian citizen ship and that has been happened -- that has happened.

KELLY: Got it. Suddenly you started to really enjoy lacrosse and ice hockey and you said why, why? Oh, I'm Canadian. Well, we're glad you came over exclusively. Thanks for being here, Senator.

CRUZ: Well, and I lived almost my whole life here and I love America so I'm glad to be only an American.

KELLY: All right. Good to see you.