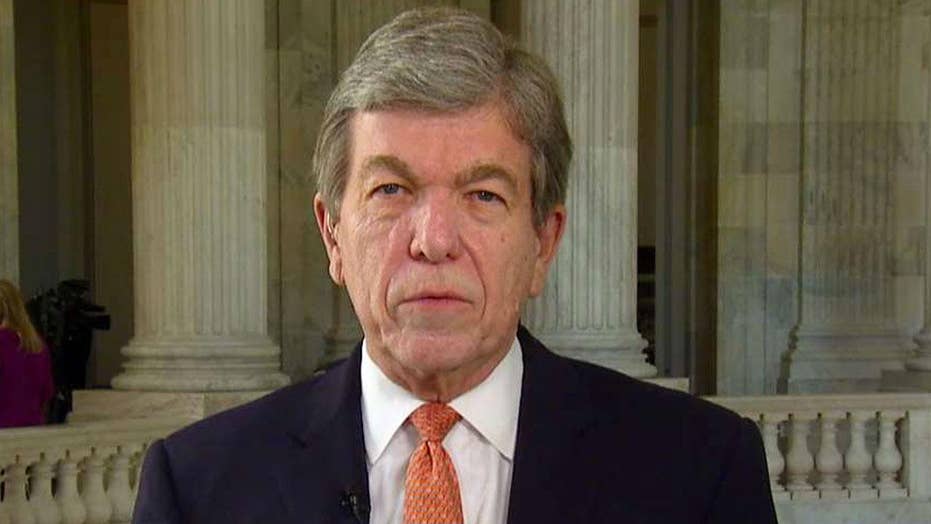 Sen. Blunt: It was a 'mistake' for Comey to leak memo

This is a rush transcript from "Your World," June 8, 2017. This copy may not be in its final form and may be updated.

NEIL CAVUTO, HOST: All right, to say that James Comey was liked by most of his questioners today is fairly accurate. In fact, they laughed at a lot of things he said, a lot of stories he told, that is, everyone but a certain Senator Roy Blunt.

I want you to take a look at this very closely.

SEN. ROY BLUNT, R-MISSOURI: You said, after you were dismissed, you gave information to a friend, so that friend could get that information into the public media.

JAMES COMEY, FORMER FBI DIRECTOR: Correct, that the content of those unclassified, memorialization of those conversations was my recollection recorded.

BLUNT: So, why didn't you give those to somebody yourself, rather than give them through a third party?

COMEY: Because I was worried the media was camping at the end of my driveway at that point. And I was actually going out of town with my wife to hide. And I worried it would be feeding seagulls at the beach...

CAVUTO: You see it? I want to be sure, because I was watching it live when we were covering this on FOX Business, which, if you don't get, you should demand. But, anyway, I digress.

Back to the senator.

You were not amused, Senator, were you?

BLUNT: Well, in listening to it the second time, it sounded like it was pretty funny.

And my second question was, why didn't you give it to the media yourself? Why didn't you take responsibility that you were the one that thought this should be in the hands of the media, rather than giving this in this backhanded way? I thought it was probably the most embarrassing moment for the director today on what was not a terrible day for him, and probably not a terrible day for the president, but I thought a pretty good day for the Senate Intelligence Committee to step up and say, this is a group of individuals that intend to get to the bottom of this and have the capacity as the part of Congress that can most likely do that.

CAVUTO: Now, that memo that was leaked was after he was fired. So, he was trying to save his reputation and get that out there. He did this through this law professor, who got the word out to the media.

But what do you think of, whether it's a former or present FBI director, doing that?

BLUNT: Well, I think it was a mistake to do it. And, if you were going to do it, you should have taken responsibility for it yourself.

There's another New York Times story that, apparently, in the middle of March, he's telling one of his friends who later tells it to The New York Times that he doesn't any have real respect for the president or the administration.

That is his view of honest, whatever he said he would be. That's probably-- honest loyalty I think was the term he used. That didn't sound either of those to me.

But my real question, this is a guy who has every reason, with a great career in public service, to be a stand-up guy. Why would you go through a back channel, rather than just take responsibility?

CAVUTO: Well, he was open to that. If the president has them, go ahead and release them.

But let me add you again. It's a mistake I want to clarify for our viewers a little later. And it concerns a statement by the DNC chair, Tom Perez.

I'm quoting here, Senator, because I have taken the I-leap here, the impeachment word leap. He said that: "Comey's testimony just gave us the clearest and most damning evidence yet that President Trump lied to the American people and is likely under investigation for obstruction of justice, a serious and disturbing charge."

I took the leap to say that would be an impeachable offense. But that was my interpretation. And that's not what he said.

But, having said that, others have said that this does wreak of obstruction of justice, which would warrant impeachment proceedings.

Are you in that camp?

BLUNT: Well, I didn't know until yesterday -- and we heard again today -- that three different times Director Comey told the president that he wasn't the subject of an investigation. And the president never asked on any of those three occasions.

These are all occasions where the director on his own decides to add that to another conversation. And, of course, if you're the president and you know that the FBI has been investigating this since 2015, and you have been told three times in 90 days that you're not part of the investigation, you would have to logically wonder why that piece of information couldn't come out.

CAVUTO: Is anything that you were hearing or anything you heard today, does any of it sound like obstruction of justice to you?

You know, presidents are often accused of this. President Obama in 2015 when he said, well, Mrs. Clinton really didn't intend to do anything bad, criticized by unnamed sources at the Justice Department. He then says the same thing again and goes a little further in 2016.

And I don't think Mr. Comey said today that he thought it was either.

CAVUTO: All right, so where is this going, Senator?

BLUNT: Well, I think, again, I think the committee, led by Mark Warner and Richard Burr, showed today that we have the capacity to deal with these difficult issues.

And I think, if we do that, we will come to a conclusion that is largely bipartisan, based on the facts. And I think we're a long way, both in private and a little bit now in public, of establishing what those facts might be.

CAVUTO: So, real quickly, your colleague Senator Lindsey had said, look, there's no way that former FBI Director Robert Mueller, who is the chief counsel here, would have even allowed Comey to testify today if there was any hint or he was looking into obstruction of justice.

I'm paraphrasing a little bit. But do you agree with that?

BLUNT: Well, I wouldn't know, wouldn't know what Mr. Mueller or Mr. Comey, either one, would think about that. But we didn't hear that today.

BLUNT: Well, and Mr. Comey hadn't been gone from the FBI that long.

BLUNT: And he repeated again today that they were not investigating the president the day he left.

Senator, thank you very, very much.

CAVUTO: Great stone face, by the way. You're smiling now. But I loved that stone face there today. All right, Senator, very good seeing you.