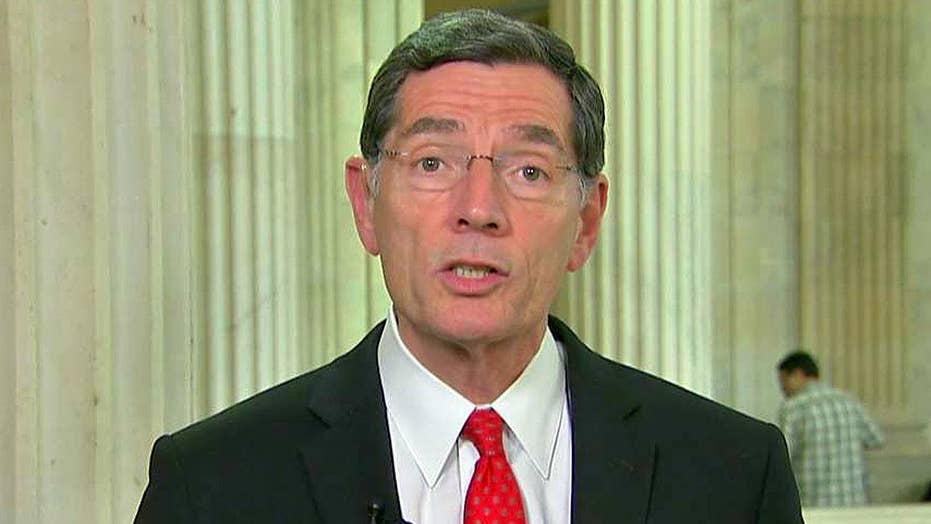 This is a rush transcript from "Your World," May 9, 2017. This copy may not be in its final form and may be updated.

REP. PAUL RYAN, R-WIS., SPEAKER OF THE HOUSE: The legislation should not have taken that long. Hopefully, it takes a month or two to get it through the Senate.

QUESTION: Oh, really? You think it will happen by the fall?

NEIL CAVUTO, HOST: All right, that was Speaker Paul Ryan on Fox earlier today saying that health care shouldn't be just one and done and all of a sudden through everything real fast. It is going to take a little bit of time, but it will be worth it.

The Senate health care working group member orthopedic doctor, by the way, and the Senator from Wyoming John Barrasso on that.

Doctor, Senator, good to have you.

SEN. JOHN BARRASSO, R-WYOMING: Great. Thanks for having me.

How long do you think this takes?

BARRASSO: Well, we're not going to set any artificial deadlines.

We want to make sure we get it right. But as the old basketball coach John Wooden used to say, you want to do it quick, but you don't want to be in a hurry. And we're not going to rush through this.

We need to make sure that we can get it right in terms of lowering premiums for American families who have suffered so much under the skyrocketing costs of ObamaCare. We want to make sure we can protect people with preexisting conditions. And we need to rescue those people right now who have been harmed by the crushing, the crumbling of the ObamaCare health care law.

CAVUTO: You're losing on the P.R. war, though, Senator. You and I have chatted about this as well.

I'm not saying that that is significant, but it's not insignificant, that the American people have this notion, maybe courtesy all of these town hall hearings that have turned into raucous affair's that you're taking health care away from them, that you're taking away their loved ones, maybe themselves, and putting them on life support.

How do you think Republicans should address that, if that's the narrative that is being foisted in the media?

BARRASSO: Well, there are a lot of scare tactics out there. We do protect everyone with preexisting conditions.

CAVUTO: Everyone? Because, Senator, that's another thing that comes up, that, in some states, they could be loosey-goosey on that.

BARRASSO: Well, if a state chooses -- and I don't want to get too much in the weeds.

BARRASSO: If a state chooses an option that is in the House bill -- we're coming up with our own Senate bill. We want to make sure people with preexisting conditions are protected, that the premiums that have skyrocketed, we can get those lower, and to rescue the people that have been hurt by this collapsing Obama health care law.

CAVUTO: So, the Senate will have a pre-existing feature in there that is not as vague as the House one?

CAVUTO: Not meaning to besmirch the House, but what that calls for is, if you let your coverage lapse and you try to get coverage later, and you have had a preexisting condition, you are going to pay through the nose.

BARRASSO: People are needing to take some level of responsibility if they try to game the system, don't buy insurance until after they get sick.

That is what driving up the cost for other people that do buy insurance. But you ask the question about what am I hearing at home. I was at home this past weekend, as I am every weekend. I was at a health fair a week ago over the weekend in a couple of communities.

That's what I'm hearing at home. All of a sudden, ObamaCare hasn't gotten more popular. The problems are still there. We're trying to address this now, Neil, because of the collapse of the Obama health care law with higher prices, fewer choices and really a loss for the American people.

No matter who won the presidential election, whether it had been Hillary Clinton or President Trump, you were going to have to deal with the reality of how much problem there is with this health care law.

CAVUTO: So, no regrets taking this on before tax cuts?

BARRASSO: Oh, no, this is what the American people are focused on. We need to get this right. We need to do it in a timely manner.

But we're not going to be rushed.

CAVUTO: All right, Senator, good seeing you again. Thank you.