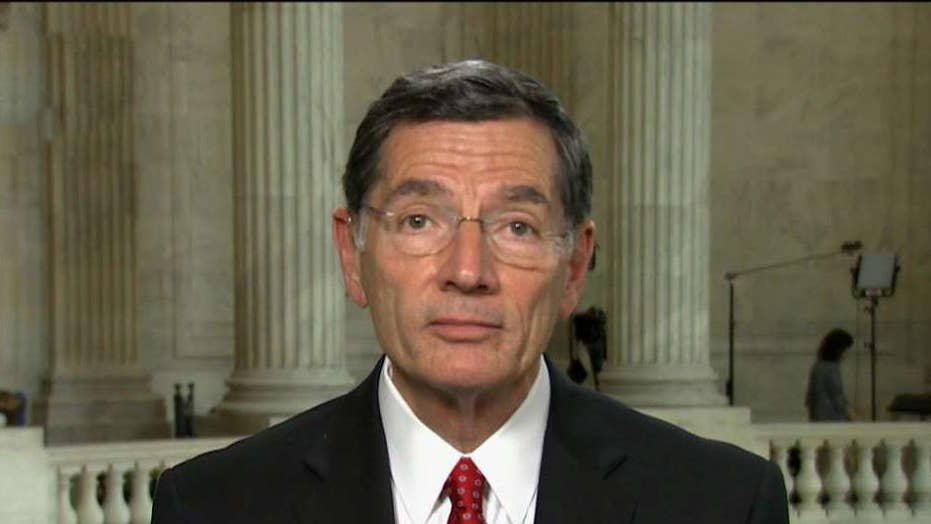 This is a rush transcript from "Your World," June 5, 2018. This copy may not be in its final form and may be updated.

NEIL CAVUTO, HOST: We already talked about Mitch McConnell's plan to keep everybody, at least the Republicans, in the Capitol in the month of August during the typically otherwise four-week August recess, Wyoming Republican senator, member of the Foreign Relations Committee, among many others, John Barrasso.

Senator, is this OK with you?

SEN. JOHN BARRASSO, R—WYOMING: Absolutely, Neil. I think it's an important thing to do.

We have been dealing with historic obstruction, deliberate delays by the Democrats just in terms of getting the president's team in place. So we want to be able to get more people confirmed.

But, additionally, you know, the president has been very clear. He's not going to sign another continuing resolution. We need to do individual appropriations bills. We have work to be done on behalf of the American people.

And in terms of the so-called recess, look, you know me. I'm a surgeon. I'm used to working nights, weekends, long hours. I think it's where we ought to be and the work we ought to be doing for the American people.

CAVUTO: How does that work, senator?

Now, obviously, Mitch McConnell is the majority leader of the United States Senate. Can he compel the minority party, the Democrats, to stay in session as well?

BARRASSO: Well, no. Every senator makes their own decisions about when they're here or not.

CAVUTO: Including your own colleagues?

BARRASSO: Yes, but votes are called. And you can either be there to cast your vote or not, to represent your state or not on matters critical to the country.

And if individuals want to not be here, well, that's up to them. I'm going to be here doing the work. I know that Senator McConnell, as our leader, is going to be continuing on the floor putting up measures for votes, for discussions, for debates, and ultimately for votes. And that's how we plan to spend August.

CAVUTO: All right, some of your colleagues concerned that this robs them of time to be out on the campaign. Some of them are pretty vulnerable, not across the Senate, where the prospects are very different than House Republicans, but what are they saying?

BARRASSO: Well, there are consequences to people's actions.

And when you put that kind of delay deliberately on slowing down the president's nominations, we still have lots of work to be done. We want to get that work done. And if we haven't gotten it done so far, which we haven't, we need to make sure we get our work done in August.

CAVUTO: Where do you see things going right now among your colleagues and the likelihood to visit another second shot at the tax cut, one that would make permanent rate cuts for individuals?

I know Senator McConnell, when I last chatted with him, sir, seemed to not be too, too keen on it. Maybe he was thinking that it would help some of the most vulnerable Democrats who would get another shot at this, maybe vote for a phase two, when they didn't for phase one.

BARRASSO: Well, you know, Neil, I was home in Wyoming all last week during Memorial Day.

There's a confidence and an optimism in families, in working men and women all around Wyoming because of the tax bill. What we have seen is, they`re keeping more of their hard-earned money, because taxes are lower.

Plus, they're seeing raises in their pay. Unemployment rates are down, which means people can wake up and know they have an opportunity for a job and to go forward, and the hope that comes from that. I would like to make all of these tax cuts permanent and work to that end between now and the end of this legislative session.

CAVUTO: When you look at what is happening in the Senate, where it's likely you guys could actually pick up seats, depending on how you want to look at the math, but a very different battle going on in the House, is it your sense that Republicans hold on, not only in the Senate, where, like I said, there`s an argument to be made where you could pick up some seats, but in the House, that in some of these very dramatic races, that the edge to Democrats isn`t what was the case?

BARRASSO: Well, the president's policies, in terms of taxes, in cutting taxes, cutting regulations, unleashing American energy, very unpopular around the United States, because the economy is so strong, and what that means to working families and having more money to spend.

CAVUTO: In some of the high-tax states, like New Jersey, where there are at least seven vulnerable Republican districts now, it's -- that tax cut is coming back to bite Republicans.

Now, it might be playing out in some other high-tax areas. Are you worried about that?

BARRASSO: Well, Neil, I want to make sure the president maintains his majority in the House and the Senate.

The Senate races are the ones that I have continued to focus on. As you know, I'm up for reelection this year, as are a number of my colleagues. But I think we have great opportunities.

And like you, I share the opinion that we have an opportunity to actually pick up seats to make it easier to get the president's agenda through the Senate. And that's what I`m working on through the fall.