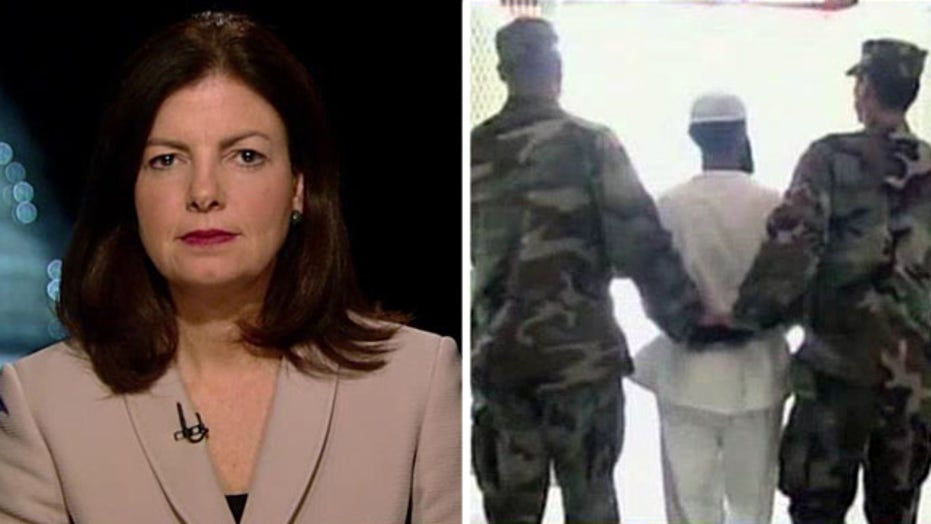 This is a rush transcript from "The Kelly File," January 13, 2015. This copy may not be in its final form and may be updated.

SHANNON BREAM, GUEST HOST: The White House also facing some serious opposition to its continued pledge it's going to close down Guantanamo Bay's detention center. And as we learned that more detainees have been released since the midterm elections than in the past three years combined, today a group of lawmakers held a news conference to warn that if we don't stop, some of these detainees will wind up back on the battlefield.

Republican New Hampshire Senator Kelly Ayotte is a member of the Senate Armed Services Committee and just introduced legislation to stop the release of these detainees.

Senator, thank you for your time tonight.

BREAM: All right. I want to start by reading a little bit of a piece from Major General Michael Lehnert, a piece he wrote in Politico. He says, I was one of the initial guys who went there, who set up Guantanamo Bay.  But now we've got to release everybody who's cleared. And we've got to close it down. He says, "It's hard to overstate how damaging the continued existence of the detention facility at Guantanamo has been."  What's your response?

AYOTTE: My response is, what is damaging is the 30 percent of Guantanamo detainees that have been released that are suspected or have actually gotten back into the battle against our soldiers and our allies.  Because I think the worst thing is that our men and women in uniform ever have to confront someone we had captured before.

So, that is the issue, Shannon. When we look at what's happening around the world right now, and we saw the attacks in Paris, just to put some perspective, the detainees that are being released by the administration, many of them were designated high risk. That means high risk for reengagement for terrorism. That's where the focus needs to be, not in the president trying to fulfill a campaign promise. It has to be on protecting the American people, and our troops and our allies.

BREAM: Are you somewhat baffled on the fact that we do release some of these detainees, the last five by my count, to Yemen? Where we know there is a growing problem, an infestation of radical terrorists who are there and actively carrying out proudly and boldly campaigns against innocent people?

AYOTTE: Shannon, Yemen is the Wild Wild West for terrorists. Just last week there was a suicide attack there where 50 people were murdered.  We have a situation where two of the alleged attackers that were involved in Paris are connected with Yemen. And we also know that it's alleged that one of them got training from Al Qaeda in Yemen. Just between September and December of this year, there were 149 Al Qaeda attacks in Yemen.

That's why our legislation seeks to prohibit the administration from transferring anyone to Yemen. When you have a 30 percent reengagement rate for terrorism, or suspected reengagement, why would you send anyone to Yemen, knowing the security situation there, knowing that they have al Qaeda training camps there? It just makes absolutely no sense in terms of keeping us safe.

BREAM: And Senator, very quickly, before we get cut off here. I want to ask you, do you have any bipartisan support? Will there be democratic sponsors? Do you have the votes that you need to get this moving?

AYOTTE: Well, right now, today, myself, Senator Burr is the chairman of the Intel Committee, Senator McCain is the chairman of the Armed Services Committee and Senator Graham have introduced this. We'll be seeking more support. But I don't know why anyone in terms of the provision of this legislation on Yemen -- I got in the Senate Armed Services Committee NDAA version, a prohibition on Yemen. It was stripped out at the last minute, in the conference committee. So I think there's a lot of bipartisan support on this Yemen issue in particular.

AYOTTE: We will. Thanks, Shannon.