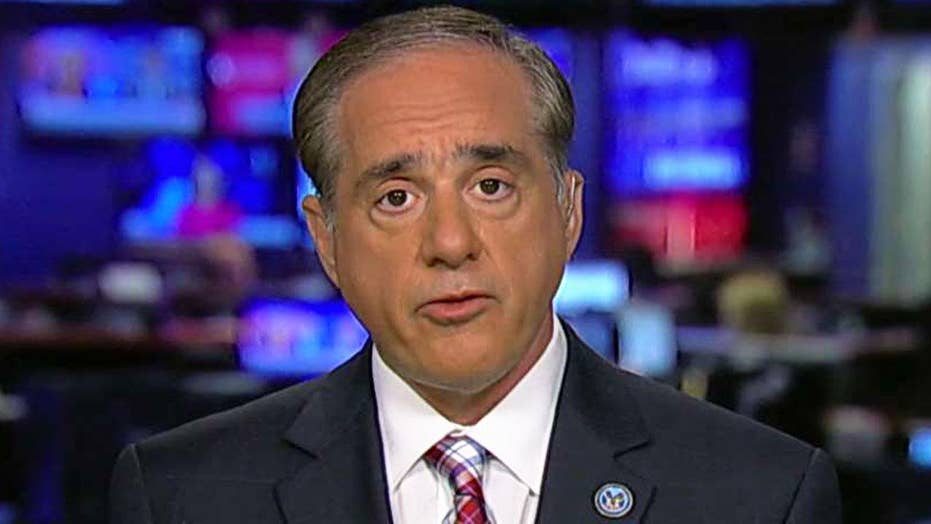 This is a rush transcript from "Your World," July 5, 2017. This copy may not be in its final form and may be updated.

NEIL CAVUTO, HOST: All right, the president has arrived in Warsaw, Poland. No big activities planned for tonight. But he will just sort of rest up for a busy day of events tomorrow, including in the public square in what they consider to be a defining moment, a defining speech on the part of an American president defending freedom.

Now to the man who also says that our veterans and our soldiers are very important to that defense, particularly taking care of them after they have done that honor.

Doctor, Secretary, very good to have you. Thank you.

CAVUTO: We live in an age where we're so cynical, I guess, about the government's ability to move on anything, that your pretty torrid pace is remarkable, the efforts you have taken to cut down waiting time, to address firing workers who aren't up to the job from roughly 51 days to half that.

You have instituted already a number of very big measures and moves. How is it going thus far? And what more are you trying to implement?

SHULKIN: Well, I think you have it right.

We feel a real urgency to get this system fixed. It has been a system that has decades of really disrepair. And we have a lot of work to do. And, of course, as you know, the president feels very strongly that we have to get this right for veterans. And so we're acting in a way that really makes sure that we're doing things as quickly as we can.

CAVUTO: Now, it is very different. I know, prior to becoming the VA head, of course, you were the undersecretary of health there appointed by Barack Obama. So, there was only so much you could do.

Now, you credited your predecessor for trying to do as much as he could, but you have uprooted the system, a couple that were commonsense kind of things to protect whistle-blowers like they hadn't been protected before, to try to make the agency more responsive to veterans.

How has that gone down, though? Because some might welcome the move. Others might resent it. What are you hearing?

SHULKIN: Well, I think one of the advantages that I had was that when I became secretary, I knew about the system and I knew who was going to be resisting and who was really working for change.

And so what I have done is, I have been able to build upon that. The accountability law that the president signed into action approximately two weeks ago has really given us an ability to make sure that everybody who works in the VA understands that this is a different organization, a different culture.

And we're really serious about making sure that we're doing best for our veterans.

CAVUTO: You know, obviously, you're doctor by training, and you haven't left that part. That's important that you will sometimes help and diagnose and work with veterans in that capacity, rather than as the top administrator.

Why is that? I mean, it is well known you're doctor. You could leave it at that. You chose not to.

SHULKIN: Well, for me, it is important.

I define myself first as a physician. And so, for me to practice and take care of veterans is very important, so that I can learn about how the systems actually work. When you sit up in an office and you're just hearing about how things work or don't work, it is very different than when you're in the field taking care of patients, working with other doctors and nurses, and you actually get to see what those policies mean in terms of caring for veterans.

CAVUTO: Secretary, you were against privatizing the VA. You had argued that that wasn't the answer. There were many people saying our veterans could get faster, more efficient, better care going that route.

You said that was not the way you wanted to go. Why?

SHULKIN: Well, first of all, I think a strong VA is essential for our national security.

When we send our brave men and women off to conflict, they have to know that, when they come back, that people, the country is going to have their back, and not just for a few weeks or a few months, but, really, as long as they need us to be there for them.

But the VA is providing services that frankly couldn't be provided in the private sector.

CAVUTO: You know, even former critics of the way things are going at the VA, including Sean Parnell, of course, who is an infantryman -- a retired infantryman, has said saying, "Shulkin," referring to you, "was not my first choice to the VA. I had hoped to see a chief executive at the department with a military service background. Based on Shulkin's initial performance in the job, that worry was unfounded. He has dramatically changed expectations."

He refers to things that you have done to try to marry the records, Defense Department records with those of the VA, so they're not -- you can -- they're seamless, but a lot of them commonsense solutions.

But, again, a lot depend also on the waiting times going dramatically down and the service remaining as stronger as it has been.

So that will be the metric which you will be ultimately judged. But at a time when budgets are tight, even with the generous allowances for the VA, are you worried that this ultimately becomes a money issue?

SHULKIN: Well, I have said that I don't think the problems in the VA are that we haven't had enough money.

Certainly, having the right budget is important. And the president has given us a very good budget this year. And we're working with Congress to make sure that that budget is implemented.

But the problems in the VA are really due to the fact that we haven't modernized the VA. We haven't been using best practices that the industry has been using for a long time. And so we're hard at work at fixing those issues.

Those are not primarily money issues. But I do want to say that we are listening in a way that we haven't done before. So we're listening to the veterans. And the critics are really important that we take seriously to make sure that we get this system fixed once and for all.

CAVUTO: Does the president ever refer to you by your title, or is it always Mr. 100 to Nothing?

Because he refers to the fact that you were unanimously approved by the United States Senate. That is a rare event in Washington history on either side of the aisle. But I always get the impression he might think that's your name, Secretary 100 to Nothing.

SHULKIN: Well, I think the president is so -- feels that it is so important that we get this right for veterans that he is understanding that this really is a bipartisan issue, that this is, when people go off to defend our country, they're not Republicans, they're not Democrats, they're Americans.

And members of Congress work together in a way that we don't see on many issues, that the issues and the laws that have been passed recently have had total bipartisan support. And this is something that I think all Americans agree upon, that are out veterans deserve the very best that we can give them.

CAVUTO: When you get both sides saying that of you, that's not a bad early read.

Continued success, Dr., Secretary. Good to have you.

SHULKIN: Thank you so much.