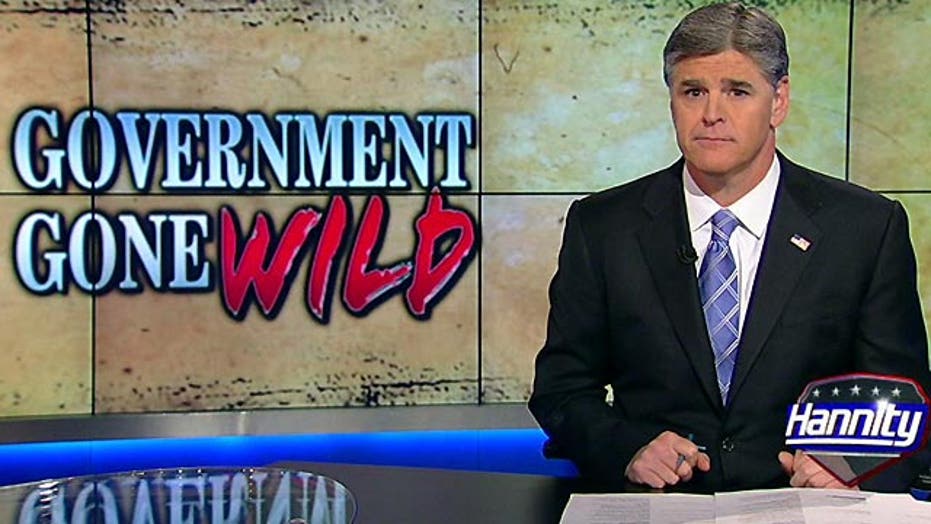 Sean Hannity: 'Our government is simply out of control'

Shining the spotlight on officials stepping over the line

This is a rush transcript from "Hannity," April 24, 2014. This copy may not be in its final form and may be updated.

SEAN HANNITY, HOST: We kick things off tonight with reaction to some disturbing comments that are being attributed to Nevada rancher Cliven Bundy. Now, they appeared in today's New York Times and were made by Bundy in what the paper likened to a town hall meeting with supporters.

Now, audio was recently posted of the alleged remarks on line. Take a listen.

CLIVEN BUNDY, NEVADA RANCHER: I want to tell you one more thing I know about the Negro.

HANNITY: Now, Bundy then reportedly recalled driving past a public housing project in North Las Vegas, and he continued by saying this.

And because they were basically on government subsidy, and so now what do they do? They abort their young children. They put their young men in jail because they never -- they never learned how to pick cotton. And I've often wondered, are they better off as slaves picking cotton and having family life and doing things, or are they better off under government subsidy?

HANNITY: All right, allow me to make myself abundantly clear. I believe those comments are downright racist. They are repugnant. They are bigoted. And it's beyond disturbing. I find those comments to be deplorable, and I think it's extremely unfortunate that Cliven Bundy holds those views.

Now, while I supported the Bundy ranch as they took a stand against the Bureau of Land Management, I was absolutely dismayed and frankly disappointed after reading the article and then hearing the commentary.

However, I also want to say this. The ranch standoff that took place out in Nevada was not about a man named Cliven Bundy. At the heart of this issue was my belief that our government is simply out of control. Now, to me, this was about a federal agency's dangerous response to a situation that could have resulted in a catastrophe, and that means people dying and people being shot, kind of comparable to what we saw in Waco, Texas.

It was about hundreds of armed federal agents and snipers and sharp shooters surrounding a family, and not because that family posed a threat to anyone else, but because their cattle happened to be grazing on the wrong patch of grass, and they were eating government grass.

In other words, when I believe government officials, when they overstep their line, I think it's my job to call them on it. And make no mistake about it, I'll continue to do just that.

Because long before the mainstream media paid any attention to Cliven Bundy and his ranch, we on this program were focusing on similar issues -- issues like eminent domain, for many, many years. Now, after all, these stories serve as proof that we have a government gone wild today in America.

Now, we reminded you about some of them last night. Now, for example, back in 2006, my friend Alan Colmes and I introduced you to Lou Anzalone. This is a World War II veteran who was being kicked out of his home after living in his home for 46 years. Watch his emotional words.

LOUIS ANZALONE: I lived in here since the first time I bought it. I renovated. I winterized it. I did everything.

And I will bless this house because I'm able to be 89 years old.

ANZALONE: And my wife is 89. Now the city decides that this is a nice place for someone else, so they're throwing us out.

HANNITY: Extremely sad. Now it took a while, three years to be exact, but I'm happy to report that the city because of public pressure -- they dropped their plans to seize Lou's land.

Now, we also met a great-grandmother by the name of Norma Peterson Fluke. That was in 2005. Now, she was going through a very similar situation. Take a look.

NORMAL PETERSON FLUKE: Family has lived here 65 years. Business has been here 56 years. And now the town has come and deemed us unfit to be in this town and wants to put us somewhere else. But we're centrally located for our business, and without this property, we would go out of business.

HANNITY: Fifty-six years. Now, thankfully, because of media attention, including right here on this program, she got to keep her home.

And then there was the heart-breaking story of a World War II vet, Johnny Stevens. Now, back in 2005, doctors told him that he had lung cancer. He was given only two years to live. Now, while he wanted to spend his last days peacefully in his home, well, the government wanted to seize his property. Why? They wanted to build luxury condos for bigger tax revenue. Take a look at this.

JOHNNY STEVENS: I don't have too much time left. I had intended to live out the rest of my life in that little house I got, tend my garden and be able to live in peace. As it stands right now, I don't know where I'm going or what I'm going to do.

HANNITY: Now, thanks to some public pressure, Mr. Stevens -- he got his dying wish. He was able to stay in his home.

Now, over the years, I haven't just reported on these stories from our headquarters here at Fox. I've hit the road to try and help people who are being victimized by the government.

Now, for example, in 2005, I traveled to the Riviera Beach in Florida to do a story on 6,000 residents who were being thrown out of their homes because of eminent domain. You may remember this.

HANNITY: What does that feel like that you may lose your house to the government because they want to build a yacht club?

UNIDENTIFIED FEMALE: It makes you just totally infuriated. You are totally, totally hostile. But it's nothing that you can do except when you guys came down here, it made such a big difference. Now we're getting national attention, and it's exactly what we need.

HANNITY: Forty-two -- and you may lose your home?

UNIDENTIFIED MALE: Well, they took my home for the school to make a parking lot over on 17th Street. I moved over into this area. Now they want the little apartment I have to build a mall for somebody else.

HANNITY: A mall, 46 years, take his home, a mall. Now, fortunately, after years of fighting and public outcry, the city council finally reversed course. The residents were able to keep their homes.

But our focus wasn't just on eminent domain. Far from it. In 2006, a couple of months after Hurricane Katrina, when residents were fighting to make sure that their homes were not bulldozed, we were there, as well.

HANNITY: These are the people that lost their homes in the hurricane and the ones that are concerned that the government and their redevelopment plan does not meet their needs and not is fulfilling their wishes.

Your home got bulldozed already, and you weren't allowed to get your possessions. And a lot of people say, at least let us get our possessions, right, you want to say?

UNIDENTIFIED MALE: Yes, I mean, basically, I mean, we all share the same sentiment. I mean, you know, just let us -- give us an opportunity to go in to do what we got to do. You know, some of us may want to stay. Some of us may want to leave. But I mean, give us -- give us that -- just that much respect. I mean, we're just as human as anybody else.

HANNITY: Sad again. And then there was the case of the delta smelt. That was out in California. All in the name of that tiny little fish, water was actually shut off to farms and their families. They were going to bed hungry and jobs were being lost. But unlike countless liberal environmentalists, we didn't take the side of the fish. We decided to stand with the people who were suffering in the valley that hope forgot. You may remember this.

HANNITY: We are live in the Central Valley in California. This is some of the most fertile farmland in the entire country, and helps sustain the entire country in terms of food and what has become ground zero in a battle between environmentalists and whether or not the farmers in the Central Valley here have water. Ladies and gentlemen, this has become a dust bowl, and we came here tonight with a message for Washington and President Barack Obama. Please, for the sake of the farmers, where unemployment is now near 40 percent, please turn this water on now!

HANNITY: Took a long time, which brings me to my next point. This is government gone wild. It's not limited to Cliven Bundy or to a California valley or eminent domain stories.

Now, in recent years, we have seen it play out in a vindictive tax agency's efforts to target and silence and intimidate citizens who happen to think this country is headed in the wrong direction. We watched tragically as our top diplomats and our commander-in-chief lied in the wake of a terrorist attack that took the lives of four brave Americans.

In my opinion, ObamaCare is the gold standard of government gone wild. But you won't read the truth about the stories that I mentioned tonight in places like The New York Times. Why? Because that paper has actively helped cover up what really happened in the aftermath of Benghazi. Its reporters don't have the time or the energy to stand with average Americans being victimized by eminent domain.

And by the way, the same goes for my good friend, funny man Jon Stewart. He's far too busy yucking it up on "The Daily Show" with his famous friends, and he simply lacks the moral courage to speak truth to power, even when he's looking it right in the eye.

And for the man who arrived in Washington lecturing the entire world on hope and change -- well, I think it's official. All hope is lost when it comes to President Barack Obama and his ability to stand for what's right.

Now, this is how his government is out of control, and that's something we will never ignore here on this program, and that's a promise I make to you.