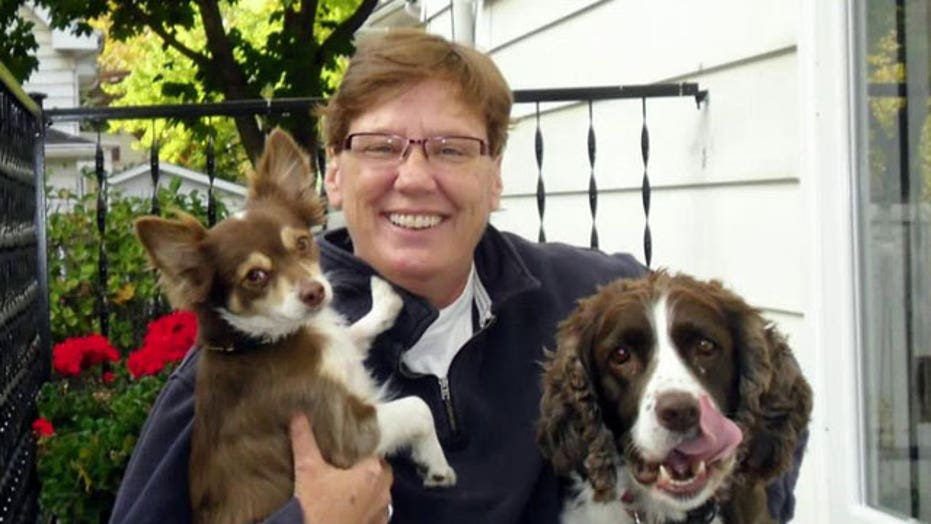 This is a rush transcript from "The Kelly File," April 23, 2015. This copy may not be in its final form and may be updated.

MEGYN KELLY, HOST: Well, we have new information tonight on a series of terrifying raids that were reportedly part of a political retribution deal against supporters of Governor Scott Walker. The raids just coming to light after a couple of folks came forward and spoke to National Review writer David French, including this woman, Cindy Archer.

Archer says she was asleep in her home one night when she was jolted awake when more than a dozen police officers with a battering ram were yelling and pounding on the door. She says she was trying desperately to calm down her dogs, begging the police not to shoot them. She was afraid, given how angry they appeared.

She says police would not say why they were there, but they ransacked her home, grabbed computers and phones and told Ms. Archer she could not tell anyone. And there was much more to this story.

Michael Lutz is a decorated retired police officer who many say confirmed these raids were politically motivated, and head of Wisconsin Club for Growth, Eric O'Keefe says the raid victims are guilty of nothing more than exercising their right to support conservative causes.

All right. Thank you both so much for being here.

So, let me start with you on this, Eric. So, you are affiliated with this conservative group, and you know some of the people who were targeted in these raids. What were -- the police were there on a prosecutor's push and a judge's order, because they were suspected of pushing conservative issues, basically. That's the charge. Just like in the IRS deal, they were being targeted for supporting conservative issues.

ERIC O'KEEFE, WISCONSIN CLUB FOR GROWTH: Right. They were being targeted based on a theory which is completely unsupportable under Wisconsin law. But apart from even that, the reality is, as I told my colleagues as soon as I was able to speak to them, you were attacked for your virtue, for your effectiveness, that's why they were attacked. Because the left was tired of losing election after election after election. They correctly identified some of the most important communicators of political messages in Wisconsin and raided their family homes with kids at home. They knew the kids were at home. They knew the schedules. They came in the dark and put aside whether people should have filed different campaign financial reports.

KELLY: And the person at the heart of it is the prosecutor, John Chisolm, and Mike, that's somebody you know well. And this is a man who was married to a union steward who didn't like Scott Walker, who didn't like his policies and certainly didn't like the conservative efforts in Wisconsin.

KELLY: And so how were you privy to that information? I mean, what evidence, if any, do you have that it was politically motivated, them going after these conservatives?

LUTZ: Sure, I was in a unique position to have some personal conversations with John Chisolm during my time as a police officer. I was working intimately with John on gun crime issues, when I retired from the police department after getting shot, John was a mentor of mine. Good friend of mine. He talked me into going to law school.

KELLY: So did he tell you this stuff? I mean, did he admit that he was doing it for political reasons?

LUTZ: He did. In a personal conversation in his office, he had stated that he believed it was his personal responsibility to stop Governor Walker and all Republicans from continuing on with Act 10 and supporting Act 10 and Governor Walker.

KELLY: Eric, do you -- are you under a secrecy order right now? Because everybody has been told not to speak.

KELLY: Are you fearful given the tactics we've seen?

O'KEEFE: No, I'm not. I would ask them if they want to arrest me to give a phone call and I'll turn myself in.

KELLY: You -- the raid victims in this case -- the raid targets in this case were harassed in the middle of the night in front of their children, often in front of their neighbors. Some in the morning when school buses were going by, and little children were seeing families with several police officers there and battering rams, and yet all of them were told keep your mouths shut. You're not allowed to speak of it?

So, you know, the old thing, the dog ate my homework. How does it sound, you know, I lost my computer. Where did you lose it? I don't know.

KELLY: Are these people going to be sitting there thinking -- and I realize there is this law in Wisconsin that allows supposedly -- it's being challenged -- this secrecy to go on while they're investigating this kind of case, but these people have got to be asking themselves whether this is still the United States of America.

O'KEEFE: They did. They were stunned. It was stunning. It's been a stunning attack. And I have sued John Chisolm. He's not fit to serve in public office. I want him removed from office.

KELLY: He denies all of this. I mean, he does not -- he says this is legit. They had a judge sign off on it, Mike. He wasn't out there alone they had the cooperation of the courts.

LUTZ: But, Megyn, this is why I came forward in the first place, because through the conversations and through what I witnessed in the district attorney's office, John Chisolm had become so hyper political and hyper partisan that he had weaponized his district attorney's office to go after and prosecute and persecute all those who had a different political ideology than him. And that's why I came forward and that's why it's just so disgusting and un-American what's going on here.

KELLY: We're going to stay on this. We are very grateful to the two of you for coming on tonight. And again, our offer to John Chisolm to come on and offer his side of the story remains.