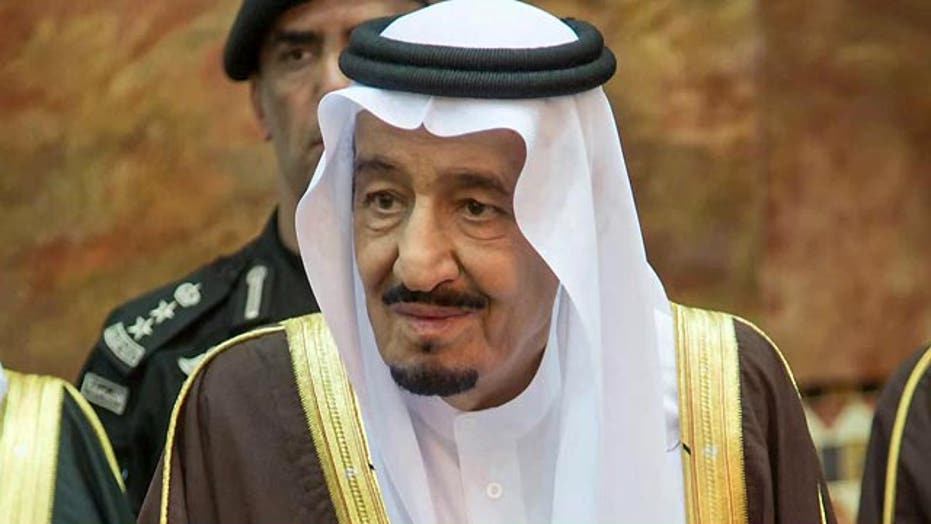 BRET BAIER, ANCHOR: The RSVPs to the White House were not that good because the White House had to spend the day saying how because King Salman from Saudi Arabia is not coming to Thursday's Gulf Cooperation Council meeting at Camp David it is not indication that things are deteriorating or that they're sending a secret message about the administration's effort on Iran.

That said, if you talk to experts who follow this stuff, many say that's exactly what's happening.

YOCHI DREAZEN, FOREIGN POLICY: I thought the idea that the king would come was always a little bit strange. This is going to be one of the first trips he has made since becoming the top ruler of one of the most powerful countries in the world. That he would come as part of the group rather than individually always seemed a little bit off to me.

But the notion that this is out of thin air is also kind of comical.
What the White House was saying later today which answered the mystery was that the Gulf states wanted a defense pact. They want the U.S. to say to them explicitly if you are attacked, we will defend. They wanted that in writing. They White House said that they told the Gulf weeks ago they were not going to do this, and they said kind of cryptically we reminded them of that this past weekend. So this past weekend is when the Saudis first said he was going to come. Then weekend ended, he is not going to come. You can rest pretty confidently that that conversation is hey, we are not giving you the pact you want so desperately, is probably why he is not coming.

BAIER: And Juan, listen, we understand some of these leaders are older and they don't travel as much. And there is all kinds back and forth about that. But on the -- when the White House thinks they are coming, and then they are not, it does send an interesting message.

JUAN WILLIAMS, THE HILL: A very bad message, I mean, because, remember, I think a lot of this is optics. And not to engage in cliches about something so substantial and so critical as security in the Middle East, but I think the White House wanted to make a show of strength here of being able to say that the Arab states were solidly in sync with what the United States policy is for both handling Yemen and for dealing with ISIS. And now, I think there is some question, given the absence of the leadership.

And again it was about having the leaders with President Obama, not the second in command. I understand what you are saying about the age of the king. He's 79, I think and some of the agencies suggest Alzheimer's.
But they wanted a show and they wanted the picture, and they're not going to get it.

BAIER: Just moments ago the White House put out a statement saying President Obama had a call with King Salman and where the king expressed his regret, quote, "in not being able to travel to Washington this week."
Charles?

CHARLES KRAUTHAMMER, SYNDICATED COLUMNIST: This isn't about geriatric travel problems. This is a loud statement from the Gulf states. You don't have to be an expert. You have to be 11 or older to understand what this statement is. And it's not about Yemen. This is about Iran. This is a rejection of the agreement the United States is about to embark with Iran by the states who are going to be very badly affected by this and who strongly object to it.

The reason that the state leaders aren't coming is because what the United States is offering in return for acquiescing to an Iran deal that does what Obama said to make Iran a successful regional power which is anathema to all the Gulf states, the result of that would be a terrible blow against security of the Gulf states, and they are saying they will not be bought off with an agreement from the United States. Even if it were a written agreement it wouldn't be worth the paper it's written on given the history of this administration carrying out the promises and the threats it makes.

BAIER: So that was my question, "yes" or "no," do they get a security agreement deal?

KRAUTHAMMER: They are going to get nothing that's worth anything.

WILLIAMS: They will get something. At this point they need something and they will manufacture something.

BAIER: That is it for the panel, but stay tuned for sports history made this weekend.