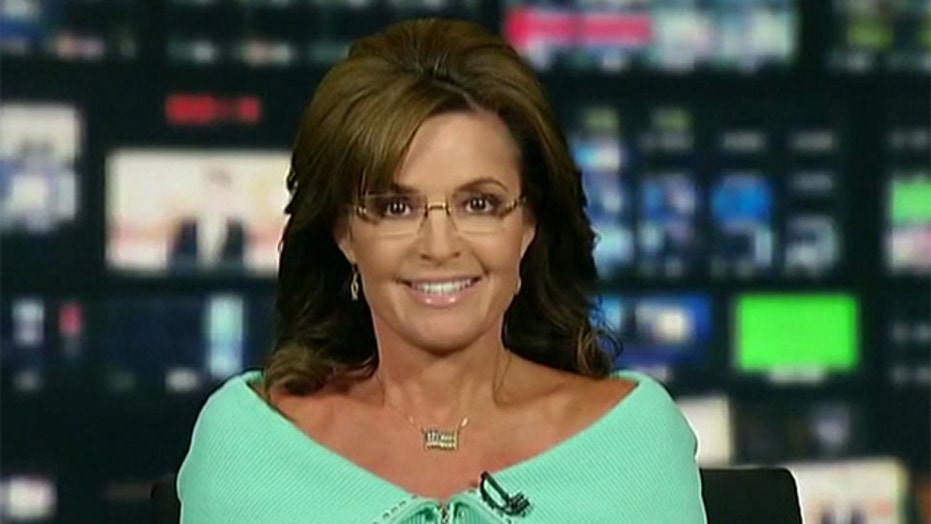 Sarah Palin on why Americans are losing trust in government

SARAH PALIN: The $70 million in tax bonuses the IRS is giving their union employees doesn't sit well with me. Only in an Orwellian government would a collective bad deed be so generously rewarded It is a shame, and it's just more reason to distrust our federal government and the nonsense that's going on in Washington DC.

ALLEN WEST: Eric, it is just the same as Nancy Pelosi said back in 2010-we have to pass the bill in order to find out what is in it. We're going to continue to find more heinous and nefarious things about this Obamacare law as we get close to its full implementation. Remember that the Declaration of Independence was written because the states were complaining about an invasive and intrusive government-the British government and King George at the time, and I think that's what we're starting to see here. This just combines with all the NSA surveillance. We don't trust the IRS because of what they were doing targeting certain groups. We continue to see people in the IRS getting promoted, and we don't get to the bottom of this; we don't get to the truth. Be very concerned about the type of organizations that will be charged with these exchanges, and these navigators, as well.

JONATHAN HOENIG: Elimination of private health care is the elimination of privacy in health care. Obamacare is really just a socialization of health care in this country, so you really should expect no privacy at all. Your health information, your private records become for the common good; whether it's cost savings or efficiency, whatever justification they use to come up with, just as now spying is done under the justification of public safety and national security, It's the same thing. He who pays the bills makes the rules. Government's paying the bills for health care; they're going to make the rules.

WAYNE ROGERS: The whole bill-it's 2,200 pages there-the regulations amount to something like 20,000 pages. It's an impossible thing to comply with. It's going to be a disaster. They have to turn it over and start all over. When Nancy Pelosi said "pass it and then we'll discover what's in it," that's the most irresponsible kind of-these are people who allegedly represent us. We are giving these people the privilege of representing us and they're just turning it back and throwing it in our face. We ought to get rid of all of them.

JULIE ROGINSKY: I'm concerned about the invasion of privacy. I agree that if you're name, Eric Bolling has an uncomfortable itch somewhere-not that I'm accusing you of doing that-but if you do I don't think the IRS or anyone else should know. I understand why they have to do it, because obviously this is part of the exchanges where they have to find out if you're getting the coverage to which you're entitled, so they have to do that. I'd like to have them do it in a code so it's not Eric Bolling's name, they'd maybe assign some number to you. But I agree, there are concerns about privacy in this.

JONATHAN HOENIG: Eric, if you want to subsidize wine you should drink it, which I do. If you're against cronyism you have to be against all subsidies: for booze, for green energy, for field production, and actually for women, children and infants, too. I disagree with you, Eric, that this is a question of priority. In fact, I think Coburn's being quite inconsistent here. He should be against all subsidies. If people want to help any industry or any individual they should help them. Government is not a charity.

ALLEN WEST: You could try to raise the level of pain, and I think that's what you see happening here. It is about priorities. In the military we understood our task, and our purpose, and our priorities. It just calls into question what really is the mission of the United States department of Agriculture, and what are they really doing? We just saw the farm bill get voted down up there in the House of Representatives because this farm bill quote unquote has now become 80 percent supplemental nutrition assistance program, but yet we still have this type of spending. So the social safety net is out there for a purpose, but we don't want it to become a hammock, and people to become overly dependent upon it.

WAYNE ROGERS: I think Jonathan can be both drunk and right at the same time. I like it best when he's drunk, though. In any case, this goes back to what I previously said. This is another case of an agency-the Department of Agriculture-totally out of control. In other words, a lot of this is unnecessary. You could cut all of these agencies in half and still be ahead of the game. They're spending money where they shouldn't be. They're taking taxpayer money because they have the privilege of doing it, and spending it where they shouldn't. There should be rules about this, and they only way to control them is to cut them in half or cut them back totally and say you can't do that anymore.

JULIE ROGINSKY: I don't know what's in that wine. Right, Jonathan, we should just allow these poor kids to be out on the street and the government shouldn't be helping them when they're starving out there. I mean come on, give me a break!

WAYNE ROGERS: Market is too crazy; do not buy any stocks right now

JONATHAN HOENIG: Get profits in "shipshape" with shipping companies and (SEA)