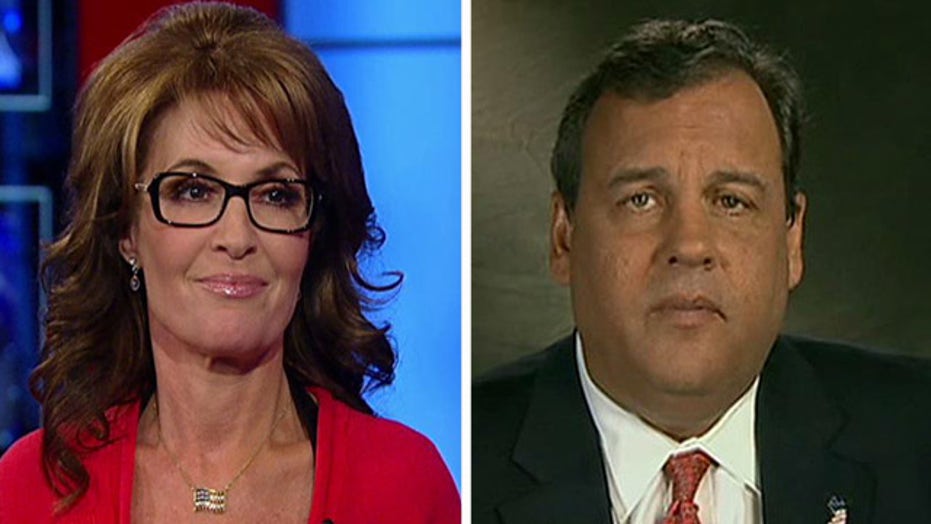 This is a rush transcript from "Hannity," November 11, 2013. This copy may not be in its final form and may be updated.

SEAN HANNITY, HOST: After Republican Governor Chris Christie easily won reelection in New Jersey and made headlines as a possible 2016 presidential contender, there are some concerns surfacing about whether the brazen governor can win over conservatives and make a legitimate run for the White House come 2016.

And that's not all. Conservatives have criticized Christie's middle of the road stance on issues like immigration, gun rights, same-sex marriage and much more.

Now, take a look at what the governor had to say on Fox News Sunday yesterday.

CHRIS WALLACE, HOST: Do you still favor comprehensive immigration reform including a path to citizenship?

GOV. CHRIS CHRISTIE, R-N.J.: Chris, what I favor is fixing a broken system. And the fact is that everybody knows the system is broken.

WALLACE: You also support some gun controls. Why?

CHRISTIE: Well, listen, Chris. I think when you look at what we have done in New Jersey, we want to control violence. And some of that may involve firearms, but a lot of it doesn't. In fact, my focus is on making sure mental health is done in a much more aggressive way in New Jersey.

HANNITY: Those remarks come after Christie unveiled proposals to strengthen gun control laws and supported legislation to offer in-state tuition for illegal immigrants. And last but not least, we can't forget the governor's famous embrace of President Obama after Hurricane Sandy.

So the question is, will conservatives ever be able to put that behind them and get on board the Governor Christie so-called express?

Here with reaction is the author of the brand new book "Good Tidings and Great Joy, Protecting the Heart of Christmas," former vice presidential nominee, our good friend, Governor Sarah Palin. Good to see you in New York.

HANNITY: Your thoughts on Christie?

But, very happy that a blue state, New Jersey, has a Republican governor. The alternative is much worse in this day and age because the alternative means Obama has more support for his statism, for his socialist policies that are going to bankrupt our country.

HANNITY: The question is, if he's picking fights with Rand Paul and Ted Cruz, his position on immigration.

HANNITY: And his position on gun rights.

HANNITY: Also very controversial appointments that he's made. I have made the case that this is not a coronation. This process has not begun yet, and there are establishment people telling Tea Party conservatives he's the only guy who can win. What's your reaction to that?

PALIN: Those establishment people have been quite wrong, it seems, especially in recent days, haven't they?

But 2016 is a long time off. And I think people aren't so concerned about these hypotheticals that perhaps will surface in 2016. They are so worried about what's going on today and what Obama is doing to the country in bankrupting us and stripping our freedoms.

We certainly, though, don't have to settle for any candidate, any politician that would go along to get along with an agenda that stifles our economy and would strip any of the freedoms that are constitutionally protected.

HANNITY: What did you think of the governor's embrace of Obama after Hurricane Sandy? I want to put it in its proper context. I noticed Mayor Bloomberg in New York, there was a lot of devastation in New York with Hurricane Sandy. He didn't invite in the president in, nor did Andrew Cuomo invite him in. But Governor Christie went out of his way, the big embrace, a big hug, a week before the election. A lot of people thought that hurt Mitt Romney. What are your thoughts?

PALIN: Perhaps it hurt Mitt Romney. I think it was unnecessary to literally be embracing Barack Obama at the time of such national import when it came to that campaign season. But, again, more important has been anyone on the GOP ticket who could support these policies of Barack Obama when it comes to granting amnesty to illegal aliens, for instance, or thwarting our Second Amendment rights or growing national debt. Any GOP member who would go that direction instead of standing strong on the planks in our platform, I question their commitment to the free markets and the freedom that's made America such an exceptional nation.

HANNITY: If you listen to the debate that's ongoing in the Republican circles, there seems to be establishment versus Tea Party. First of all, do you concede that's true?

PALIN: Oh, yes. But that's been ongoing for a long time.

PALIN: Many have taken on from a local level on up to the national level that establishment that has been part of the permanent political class that has gotten us into the situation we are in today, and that is on the road to bankruptcy.

HANNITY: I like -- I don't know why Ted Cruz and Mike Lee came under so much fire when all I see they were doing was fulfilling a campaign promise to their constituents and fighting as hard as they can. I'm angrier at those who weren't willing to fight. They said we can't win.

PALIN: Not only were they not willing to fight, they threw the good guys under the bus. Ted Cruz, Mike Lee willing to stand strong on planks of the platform they ran on in addition to so many other politicians running on the idea of repealing and replacing ObamaCare. They finally had an opportunity to stand up and defund it and get America to debate the issue. And then they were thrown under the bus.

HANNITY: I don't get it.

PALIN: The debate was very, very important, though. Obviously I'm on team Cruz and team Lee, appreciating what it is they even sacrificed to get out there and debate and fight for us.