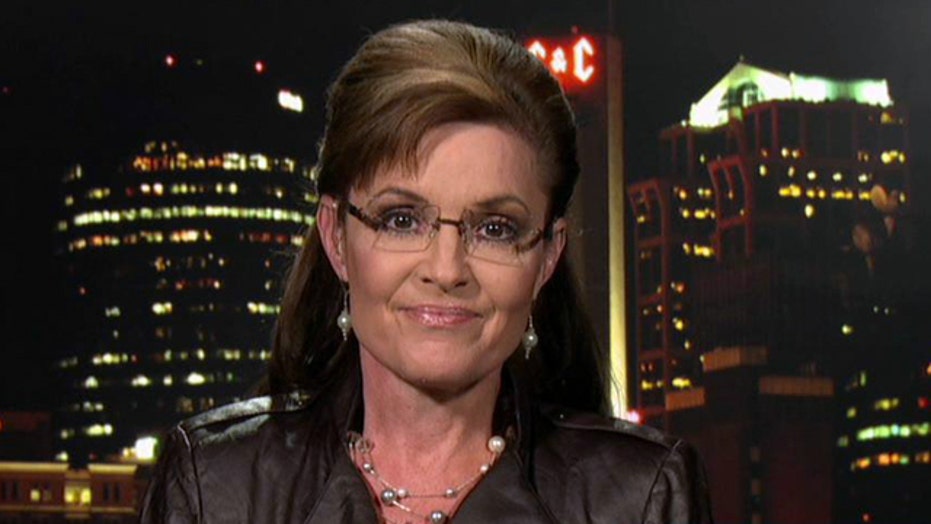 This is a rush transcript from "Hannity," May 21, 2014. This copy may not be in its final form and may be updated.

SEAN HANNITY, HOST: Last week, Karl Rove -- he stirred up some major controversy when he questioned Hillary Clinton's health. Now, immediately following his remarks, the left in typical fashion -- they began slamming him.

Now, the post reads in part, quote, "Hey, Hillary's brain is off limits! Leave her health records alone. Democrats are right -- scouring records of a female candidate is just the politics of personal destruction. And for the media to engage in it would be unfair, unethical and absolutely unprecedented. Now, you can't probe a woman like that because, well, it's a war on women!"

Here to explain for herself, former Alaska governor, Fox News contributor Sarah Palin. Governor, how are you? Welcome back.

HANNITY: You know, it's pretty funny. I said this during this battle over Sharia and these Nigerian school girls taken, that it seems the left's definition of what feminism today is you got to support abortion and demand free birth control, because when women are really being oppressed, their voices, at least for women living under Sharia, have been virtually silent, have they not.

PALIN: Well, yes, this is, you know, more application of that double standard, though, that raging liberals are known for here. As I had suggested in that post, a liberal can attack a conservative woman, but it's a war on women if you were to question a liberal woman.

And it's not just gender, though. It's race, also. Obviously, liberals -- you know, they can attack T.W. Shannon (ph) and Allen West and some of these good guys that are out there fighting for the right reasons, but heaven forbid, you're going to be called a racist if you were to question Barack Obama's failed policies.

HANNITY: Well, it's basically standard operating procedure now at NBC News. I still to this day -- I don't get the controversy about Mitt Romney having resumes, quote, "binders" on women. I still don't get how Sandra Fluke thinks that if she goes to George Washington University Law School, that somehow, she thinks that the public ought to pay for her birth control.

I have a hard time understanding that mindset. Can you help me out?

PALIN: Well, of course, you do because you're a common sense conservative who just wants fairness in this game now that's being played in the arena of politics. And that game is the left will get -- grasp anything that you say that can be taken out of context and perceived as either being racist or sexist, and they charge you with that. And that way, the debate, the conversation is stopped, and they get to claim victory then on that issue because they can't argue the issues, Sean.

Obviously, the issues that are so important to Americans have to do with the failed policies of the far left. They can't win on arguing their points of their policy, so they have to go on the semantics and the comments that are made by a conservative.

HANNITY: What are your thoughts -- we're watching now the scandal just emerge, more information every day. We're hearing from victims and the whistleblowers, at least on this program. We're putting on the victims who have lost loved ones because of the scandal at the VA. But it is Albuquerqueand it's Colorado and it's Phoenix and it's Florida and it's Virginia and it's West Virginia and it's all now -- they're looking -- probing 26 separate areas.

What is your take on this?

PALIN: Well, the problem starts at the top. And when you have a commander-in-chief who has not been engaged and was told six years ago about the problems at the VA and has just pooh-poohed the problems -- he has just been engaging in rhetoric about problems of those under his charge, our troops. They have earned the benefits that we should be providing them, that they have been promised, and yet the commander-in-chief has let that all go by the wayside until it blows up, and then it blows up in this public issue that we see today, and he just spews more rhetoric.

Nothing's going to happen while Obama is in charge of our military and the VA and our federal government in general. Government's going to continue to grow under Barack Obama, and this big, ineffective, inefficient government that he has grown will just create and perpetuate the problem.

PALIN: Well, a couple of reasons. One is when you hold someone accountable, it takes some energy and resource, and Barack Obama is lazy. In fact, he warned us that he was lazy and he attributed that to having been brought up in Hawaii. It's his words, not mine.

And another thing is that Barack Obama still doesn't see what the main problem is. The main problem is government. It's not the solution, like Ronald Reagan said, it is the problem. He doesn't recognize that. So he will continue to do what he's doing. Status quo is fine with him. He's not called out as often as he should be because the media, as formerly the referee in this, again, game of politics, isn't doing its job and holding him accountable.

HANNITY: What are your plans for the election this year?

PALIN: To continue to get out there and campaign hard for people who will be in Washington, D.C., to fight to protect the Constitution and for our freedoms and for a vibrant economy again. It's to undo everything that Barack Obama and his party, the Democrats, have done to this country to put us in the boat that we're in.

HANNITY: All right, Governor Palin, good to see you, as always. Appreciate you being with us.

PALIN: Thank you so much.