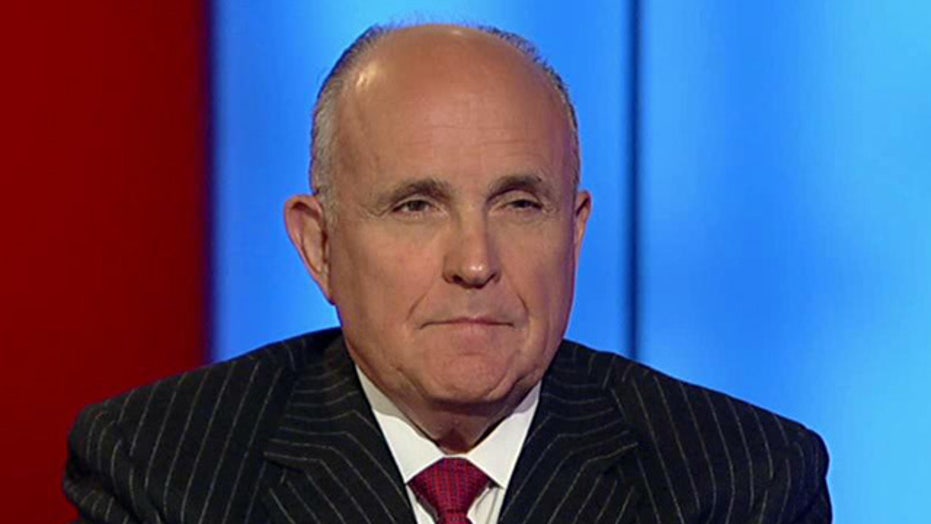 Rudy Giuliani's take on the search for missing Flight 370

Former NYC mayor on what precautionary measures the U.S. should take

This is a rush transcript from "Hannity," March 19, 2014. This copy may not be in its final form and may be updated.

PRESIDENT BARACK OBAMA: We have put every resource that we have available at the disposal of the search process. There's been close cooperation with the Malaysian government. And so not just NTSB but FBI, you know, anybody who typically deals with anything related to our aviation system is available.

And so, you know, our thoughts and prayers are with the families, but I want them to be assured that we consider this a top priority, and we're going to keep on working with the international community to see if we can get to the bottom of this.

HANNITY: All right, joining me tonight to explain what precautionary measures should be taken here at home, former New York City mayor Rudy Giuliani. Mr. Mayor, thanks for being with us.

HANNITY: We do know about the simulator, that reportedly, now, that he practiced takeoffs, landings at five South Asian airports using this flight simulator, and then erased and deleted the data. And if we look at the -- Sri Lanka, and then we've got Maldive, where there was a report of a sighting of a Malaysian aircraft at that time.

HANNITY: What do you make of it?

GIULIANI: Well, I mean, it -- it's becomes clearer and clearer that this is a deliberate act. Looks like the pilot was involved, can't be sure, right? Too many imponderables here, but you have to have a hypothesis that there was a deliberate plan to take this plane somewhere and do something with it.

Problem is, we still don't know what that plan is. We don't know what purpose they had in mind. Obviously, it was a nefarious purpose, and it was obviously done by experts, people who knew this plane intimately. Communications -- all the communications just didn't just get cut off by accident. That had to be done on purpose. The turn was pre-programmed. The co-pilot gave that "Good night" signal after the turn already happened.

I mean, these are all facts that point to some kind of a deliberate plan to do this --

HANNITY: -- and then we had seven hours of pings, which wouldn't have occurred had, in fact, something terrible or catastrophic happened.

GIULIANI: Right, had it gone done or been destroyed or blown up. Let's say it was blown up.

HANNITY: Are you confident that the FBI will be able to recover the deleted data from the flight simulator? I would think that it's very difficult to delete anything these days.

GIULIANI: I would think the -- I have a lot more confidence that they're going to do that than we're going to ever find this plane.

GIULIANI: I mean, it's getting tougher and tougher. If it did go down in the Indian Ocean or any of the oceans, it's going to be really hard to find.

I would think the FBI is going to be able to do a pretty complete reconstruction of what was in the simulator, what was in the computers, so at least you get a picture of what they were thinking about. The frustration here is, clearly, they took this plane. Clearly, they had a nefarious purpose. But we still are no further toward figuring out their purpose than we were 12 days ago.

HANNITY: What do you make of the fact that the flight path was altered by computer command? That tells us that somebody in the cockpit did this, the fact that the transponder and other communications, navigation, rather, was also turned off, but yet the navigation that's built into the plane...

GIULIANI: When I first heard that, I thought maybe, well, maybe one of pilots was involved, not the other...

GIULIANI: ... so he wanted to make this switch without the other pilot knowing it. But you know, you can't be sure of that, either. I mean, could be that there was a third person that was involved, either working with the pilots or -- but that person would have to had very, very deep knowledge of this airplane. It's hard to believe, even like those two Iranians, would have had that kind of knowledge.

HANNITY: What do we -- what -- do you glean anything from the fact we now know that this opposition leader, who was recently sentenced to five years in jail, apparently, the trial ending just, what, seven hours before this flight took off, Anwar Ibrahim -- does that come into play, the fact that the pilot was a relative, that he wore a "Democracy is dead" as a T- shirt -- we'll play some of his comments later in the program tonight. But does that raise a red flag for you, whether his cause was just or not? That's not at issue here.

GIULIANI: Right. I mean, it raises a red flag that it might have created an emotional impact, you know, a tremendous emotional impact in somebody that's not exactly all there. But with all the prior planning, it sounds like this wasn't just decided on three, four, five hours, six hours before they did this. Sounds like something like this had to have been planned for a while in advance. They had -- there was too much in it. There were too many thing that were cut off and changed. Hard to believe they just came up with this plan and just executed it like that.

HANNITY: We had General McInerney on the program last night. He's very...

GIULIANI: I heard it, yes.

HANNITY: All right, now -- and we're going to play some of that interview coming up here in a minute. But he's really convinced that this plan was purposely -- was -- landed in Pakistan. He has some intelligence. Why wouldn't Boeing be able to track this plane?

HANNITY: And they haven't said anything!

GIULIANI: I will say this. The Israeli government, even if it's a 1 percent chance that that's a possibility, is doing the right thing to prepare for something happening.

HANNITY: Well, they usually do do the right thing.

GIULIANI: And we should be doing...

HANNITY: We could learn a lot from them, as well.

GIULIANI: We should be doing the same thing...

GIULIANI: ... to prepare for anything's happening. And it's is not wasted because some day, something will happen, and we'll be better prepared for it.

HANNITY: Let's run through the different scenarios that we're talking about here -- a hijacking by the pilot or the crew, terrorism from the pilot, they wanted to plow this thing into the Indian Ocean, perhaps...

HANNITY: ... terrorism, the co-pilot, hijacking from a passenger, less likely because of the -- because of what we know about the data being programmed?

HANNITY: See, I think I'm leaning where you are here. I don't think this is a mechanical failure. I don't think it's a fire in the cockpit. The one thing that interested me is the Federal Register report that there might have been a flaw in this particular airplane that would have allowed some type of cyber-hijacking, where somebody could literally turn off the transponder from within the plane. Way out there, but...

HANNITY: Yeah. What should the United States -- what should the president be doing now? Or maybe he's doing it, and we don't know it.

HANNITY: Is this something that -- that he might have a lot more information than he's letting on?

GIULIANI: I hope he does.

HANNITY: I hope so.

GIULIANI: I believe he does. I hope he does, but you can't be sure. I mean...

HANNITY: He's filling out his brackets and Michelle's getting ready to...

HANNITY: ... you know, fly to China on our dime, with no reporters allowed.

GIULIANI: I think this one, I think they're probably doing everything they can do to help. Look, we're at risk here. As long as we don't know what happened to this plane, we're all at risk that something terrible could happen.

GIULIANI: So you've got to take this very, very seriously. And I know it's enormously frustrating because there's so little to go on. But every country should be on alert because God forbid, who knows what the plan was.

HANNITY: All right. Mr. Mayor, thanks for being with us.

HANNITY: Appreciate it. Your experience in law enforcement, and obviously, what happened on 9/11 plays a big part here.