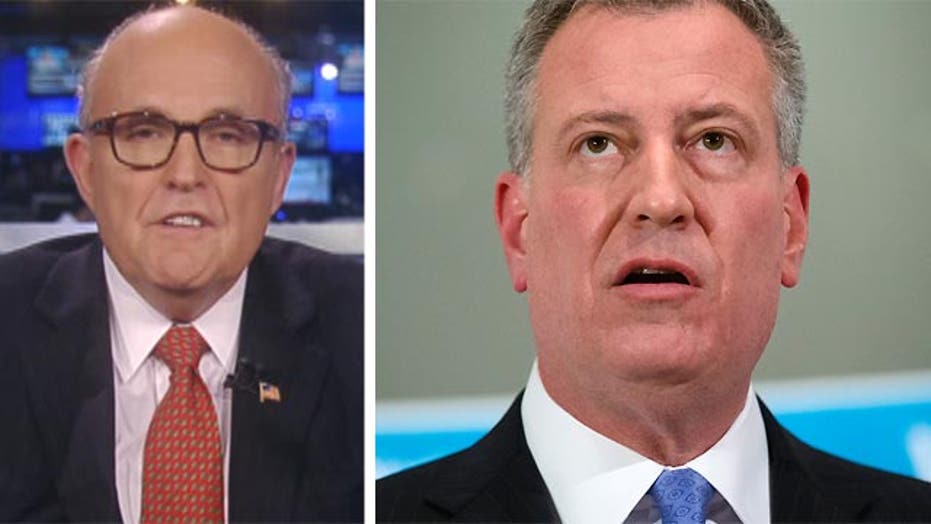 This is a rush transcript from "The Kelly File," December 23, 2014. This copy may not be in its final form and may be updated.

SHANNON BREAM, GUEST HOST: Joining us now is former New York City Mayor Rudy Giuliani, who has been very outspoken in the wake of these murders, and of course, led the city through one of its biggest crises ever, 9/11. Mayor, thank you for joining us.

RUDY GIULIANI, FORMER NEW YORK CITY MAYOR: Thank you for having me.

BREAM: All right, let me ask you, your response to what we've heard from the mayor in the last 24 hours or so. He said we need to protect them. Our community should honor them. We have to protect them as part of our duty.  If you see something, know of something, report it. Is that enough for you?

He has played into, unfortunately, the national rhetoric of, you know, police officers being racists. He's done it at numerous times you've seen him on television attacking the police. And the reality is he owes them an apology.

They shouldn't have turned their backs on him. That was probably not right, but I understand the emotion and they're trying to send him a signal that they do not feel that he supports them. And he should apologize to them for having allowed that situation to, you know, to occur.

Not the murders. I don't consider him impossible in any way for the murders. Murders have happened under all mayors, and they're tragic. I just spent some time with both families, both the Ramos and the Liu families, and it is quite true, as Commissioner Bratton says, these two men were exceptional men.

So, it's absurd for this mayor to have played into this notion that the New York City Police Department has some kind of a substantial racism problem.  And then you get these maniacs on the street who are calling for the killing of police officers. Where was the mayor when that was happening?

Might have helped two and three and four, five days ago if the mayor had condemned the fact that these people in the streets were calling for the death of police officers. I mean, we're talking about hundreds of people doing it.

The streets don't belong to pedestrians any more than they do to protesters. You can protest but you protest on the street. I just talked to someone who a person who was in a serious accident was seriously delayed in getting to the hospital because of the Brooklyn Bridge being blocked.

This is a matter of life and death in New York City. If an ambulance takes 8 minutes instead of 4 minutes, somebody dies. And for the mayor not to understand that is really kind of a monumental failure.

BREAM: I want to play a little bit of what he had to say yesterday when he was asked by a reporter about some of those protests that use the language that was very inflammatory and those who are marching and accusing the police officers of being racists. Here is how the mayor responded to that question.

NYC MAYOR BILL DE BLASIO: What you managed to do is pull up the few who do not represent the majority who are saying unacceptable things, who shouldn't be saying those things, and some who actually physically attack police officers which I said is absolutely unacceptable, we'll prosecute them to the fullest.

Everyone must participate in finding those individuals, providing information to the police, intervening to stop them, alerting the police.  I will keep saying this over and over. The question is will you tell the world about it? Because you all are part of this, too.

BREAM: So does the media bear some responsibility by playing those remarks, for letting people know they're being made?

The public can be alert to the fact that there are these possible threats that are out there. And the media hasn't overplayed it. If anything, the mainstream media has underplayed it. I don't think you realize how many police officers were injured.

Now all of a sudden police officers get killed and he starts talking about it. He should have been out there from day one condemning that kind of language and he should not have allowed the protester, the good or the bad, to take his streets.

GIULIANI: This mayor doesn't seem to know what the heck he is doing in the job.

BREAM: We got to leave it there. There are still questions about whether or not he'll continue on in that position.

GIULIANI: And he should apologize. Failure to apologize is going to create such a serious rift. I hope the man has the ability of self- reflection.

BREAM: All right. Former New York City Mayor Rudy Giuliani, we've got to leave it there. Merry Christmas, sir. Thank you for your time.