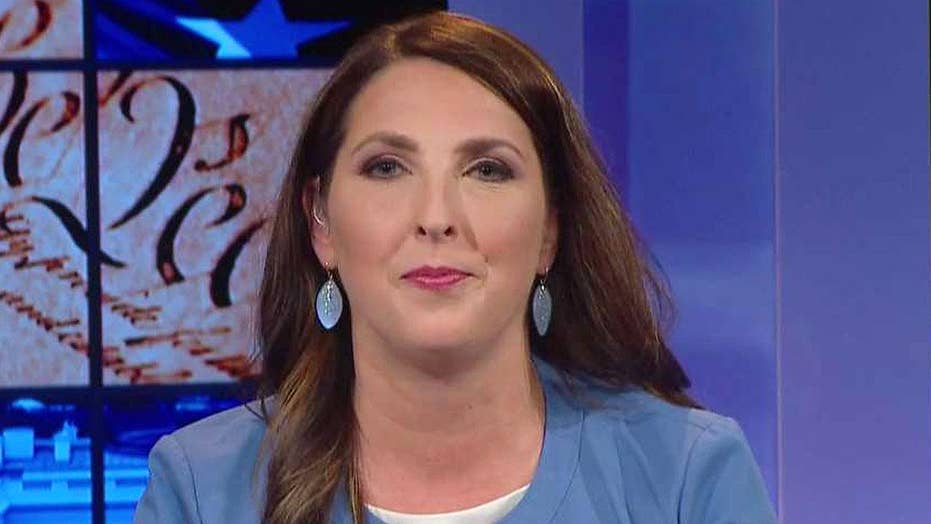 RNC chairwoman speaks out on 'Your World'

This is a rush transcript from "Your World," July 26, 2017. This copy may not be in its final form and may be updated.

NEIL CAVUTO, HOST: All right, reaction all of this.

Ronna McDaniel joins us, the chairwoman of the Republican National Committee.

Very good to see you again. How you doing?

RONNA ROMNEY MCDANIEL, CHAIR, REPUBLICAN NATIONAL COMMITTEE: Oh, great. Great to be here. Thanks for having me, Neil.

CAVUTO: All right, I do want to talk about little bit about, well, everything here, the health care thing. The president is no doubt watching that closely. You are watching this closely.

We're told, on the health care fight here, that it might all come down to a skinny repeal, sort of something that can be mutually agreed on by everybody, but that barely changes the needle.

ROMNEY MCDANIEL: Well, I think we have to get it to conference. And I think that's the goal.

Getting it to the floor was critical yesterday, that vote. And, of course, Senator McCain being the final vote and Mike Pence being the tiebreaker was critical.

Now we can have the discussion. We're going to have debate for the next day or so, and then they will add the amendments Thursday, and then the hope is to get it to conference, so that the House and the Senate can work together to find a bill that everyone can agree on, and we can finally repeal and replace ObamaCare and help the American people.

CAVUTO: All right, now, the repeal measure itself that Senator Rand Paul wanted was shot down, seven Republicans among those rejecting it, including John McCain.

What did you make of it?

ROMNEY MCDANIEL: I don't think it was unexpected.

The senators had come out last week and said that they wouldn't support the straight repeal. And I think there's an expectation that we're going to get to conference and be able to go forward with the Senate and the House and do the repeal and replace.

CAVUTO: All right, onto taxes.

The president seemed to indicate that he's still a fan of getting across- the-board tax relief, but maybe not totally across-the-board, that the rich could be left out. They might even pay more.

ROMNEY MCDANIEL: Well, I think the president is looking at, how do we stimulate our economy and how do we help the middle class?

The middle class has been overburdened. Their wages have been stagnant. They have taken the brunt of ObamaCare with premiums doubling and deductibles so high. And that's his first priority.

I think it's still in progress. We're going to see a robust discussion on that. But we need to help the middle class of the United States of America, and they need tax relief.

CAVUTO: Do you think the rich, Ronna, don't pay enough?

ROMNEY MCDANIEL: Well, I don't know how you define rich. So let's see what he's putting as rich.

If it's somebody who is making $5 million a year, we'll see where that is. I certainly don't think I can say which person is rich or not. We will have to see what the Senate and the House and the...

CAVUTO: The reason why I ask, I know met with Robert Kraft, who owns the New England Patriots, and was talking a little bit with Steve Bannon sometime back, his strategist, who was an advocate, we're told -- I could be very wrong -- for higher taxes on the wealthy.

But the message some fear on the Hill that could be sending is that, is this president dialing back the size of tax cuts at this point, when the focus will be on the middle class, as you argue, as Republicans think it should be, Democrats think it should be, and on corporate taxes, but they as a group will not be included?

ROMNEY MCDANIEL: Well, and they're going to have to take a look at the numbers and make sure it adds up.

I think the priority, as you said, is the middle class. That makes sense. They're taking the brunt of everything, from health care to stagnant wages.

ROMNEY MCDANIEL: Yes, they are, yes.

CAVUTO: And they're saying, geez, the rich thing, that won't work.

I think they have to look at the numbers and how they add up and we have to help the middle class. We have got get the economy humming and do a corporate tax cut.

ROMNEY MCDANIEL: And then you have got to look at what you can do and how we fund the things that we need to fund, like our military and all the other things that we have to take care of.

What do you think of this Jeff Sessions dustup? A lot of Republicans, maybe owing to the uniqueness of the club we call the United States Senate, don't like the way the president has been treating him and dragging him out in the mud here.

Among them -- and these are people that I have talked to, Chuck Grassley, and Richard Shelby, and Thom Tillis, and all of them saying, you know, no, no, no, this guy did the right thing when he recused himself on the Russia thing, and this is no way to treat someone who was a very loyal and early supporter of the president.

ROMNEY MCDANIEL: Well, I wasn't part of their discussions early on.

ROMNEY MCDANIEL: But you don't know if they had discussions early on saying, if this happens, would you recuse yourself? We don't know what their personal discussions were for Jeff Sessions to get that job of attorney general.

This is what I know. The president is a fighter. He wants people who are going to fight back on his behalf.

CAVUTO: I know, but he's fighting with his attorney general in a very ugly, public way. Why doesn't he just fire the guy?

ROMNEY MCDANIEL: He is saying, I want people in my administration to fight against this false narrative that the Democrats keep putting forward that there was collusion between Trump campaign and Russia.

CAVUTO: But, you know, Ronna, he's just humiliating the guy.

ROMNEY MCDANIEL: Well, he's letting him know that he's not happy. And then there's things I'm sure he's happy with, too. And we saw Jeff Sessions today is going to look into the leaks. And I think that is something he should be doing.

CAVUTO: Are you surprised, Ronna, that Sessions hasn't quit?

ROMNEY MCDANIEL: No, I'm not.

I don't know the back and forth between the White House. Frankly, this isn't surprising with the president. I like -- if he says, hey, I don't like what you're doing. He's straightforward.

ROMNEY MCDANIEL: Well, he may be. We don't know.

CAVUTO: All right, we will see.

Ronna McDaniel, thank you very much. Good seeing you.

ROMNEY MCDANIEL: Thanks for having me, Neil.