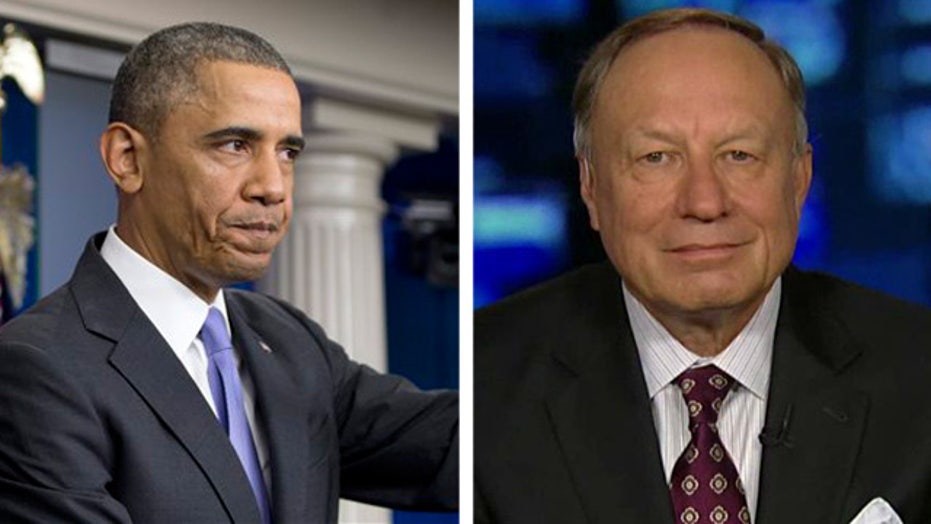 Why the insurance industry is warning against the plan

This is a rush transcript from "The Kelly File," November 14, 2013. This copy may not be in its final form and may be updated.

MEGYN KELLY, HOST: A moment ago, we mentioned one of the big things to remember. The president told insurers that they can re-sign the millions who have been kicked off of their insurance if the insurers want to. If they want to. But that doesn't mean that they have to. And if they decide to, does it mean they have to redo everything they just undid?

Bob Laszewski is an industry insider, the president of Health Policy and a strategy associate and a former executive of a health insurer. Bob, the insurance industry came out almost immediately in a collective statement and said, you do this and you're going to see higher premiums. Explain that.

ROBERT LASZEWSKI, HEALTH POLICY AND STRATEGY ASSOCIATE: Well, yes. We all have to be in the same system. Now, the complaint that I have with ObamaCare is it tries to put us all in a system that's a lot more expensive because it increases all these extra mandates and benefits and so forth. But the bottom line is, you all have -- everybody has to be in one system or another. We can't play a game or we decide where we can make the most money. So, the president is now creating a system where people can choose, can I make more money in ObamaCare? Can I make more money in the old system? And the result to that is --

LASZEWSKI: Yes, yes. Well, the individuals can now choose which they want to be in. They're going to choose in their favor. And that's going to end up making the system a lot more expensive because people will make -- each will make more money in either system.

KELLY: All right. Let me ask you this though. Have we now established that -- I want to think about exactly how to say this. Have we now established for sure that the entire scheme here was to boot the people out of the individual insurance market and push them over to the state exchanges? Because I had a conversation about that very fact, with Zeke Emanuel last night. And to me, it sounded very much like he admitted that explicitly. Listen.

KELLY: OK. Giving you that for purposes of tonight.

EMANUEL: They did it for business reasons.

UNIDENTIFIED WOMAN, "THE SITUATION ROOM WITH WOLF BLITZER"/CNN: The only reason that plans are sending notes to consumers about losing coverage is because of the requirements of the new legislation.

KELLY: All right. So, there you have an exchange about who is to blame for the cancellations.

KELLY: What are the administrative headaches that the insurance companies are looking at if they decide to do it?

LASZEWSKI: Oh, Megyn, this just makes everything so much worse. This Obama administration has been building the healthcare.gov website now for three years now. They have got it all screwed up. It doesn't work. And now they are saying to the insurance industry you have to turn on a dime and redo everything.

You know, healthcare.gov says that everyone must purchase coverage by December 15 in order to be effective by January 1. December 15th is 31 days from now. The insurance companies now have 31 days to reverse everything they have been doing over the last few months with these cancellation letters. The administration is requiring the insurance company to send people a letter saying, here is the plan you've got now, here are the differences. Can you imagine how much work it's going to be? Every policy has got to have a letter talking about the differences. Then you got to send that letter through the U.S. mail. Then you have to give people a couple of weeks to make up their mind. Then they make up their mind, the insurance company has to redo the premium system, the banking system, collecting from people's bank accounts, change the provider directories. It's taken them months to get to this point. This administration can't get their website straight in three years and they want in 31 days for these insurance companies to change everything. It's logistically impossible.

This is about politics. This is about politics. The administration is in the hot seat here. It's got this hot potato. And what it's doing -- over cancellations, it's throwing it to the insurance industry and it saying, you have a choice. You can renew all these policies and take on a logistical nightmare you may not be able to get out from under, or you can tell people they can't keep their insurance. And the president is off the hot seat. If you're an insurance executive, which one do you choose?

KELLY: Yes. The president came out tonight and said, what we want to tell the people is that the Affordable Care Act is not going to be the reason why insurers have to cancel your plan. Meantime, the insurance agencies are saying, you've got to be kidding me, you're the one who put us in this position.

LASZEWSKI: In 31 days they want it fixed.