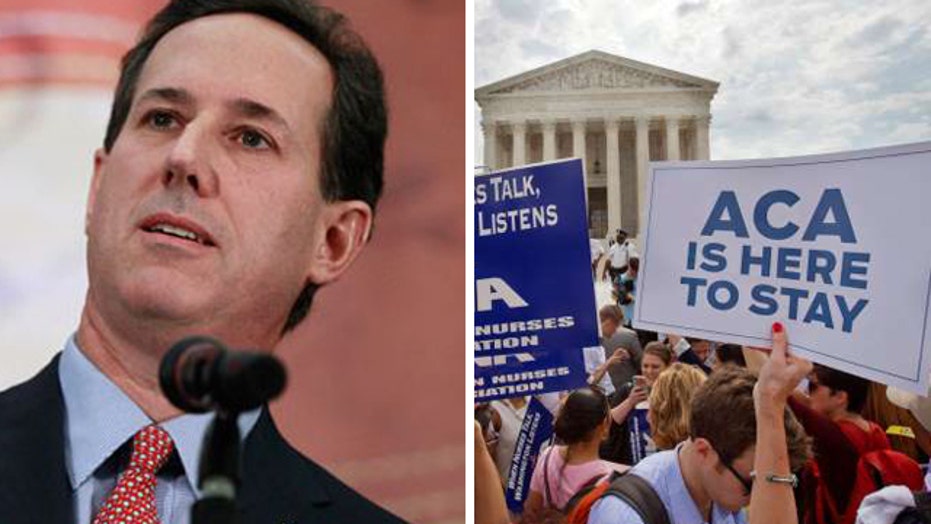 Rick Santorum: ObamaCare is not working

This is a rush transcript from "Your World," June 25, 2015. This copy may not be in its final form and may be updated.

To Republican presidential candidate Rick Santorum, who is not giving up.  He joins us on the phone now from Omaha, Nebraska.

Senator, good to have you again.

CAVUTO: First off, I think this thing is here to stay. It's going to be hard to undo, maybe depending on what happens after 18 months and the next election. But it is very much entrenched here.

So, what do you think happens? What can Republicans do in the 18 months before the election?

SANTORUM: Well, I think you continue to point out how we could have a much better health care system, one that is actually covering more people and providing quality care at lower cost and getting the care that people want, as opposed to what the government tells you, you should have.

CAVUTO: Well, the president says it is at lower cost. You don't buy it?

SANTORUM: Well, yes, I just heard your previous guest on talking about how health care stocks have all gone up.

If it is a lower cost, let me assure you, those stocks would not be going up. There's very little in the way of cost controls in a meaningful way.  The only kind of cost control is going to be when this thing, as it will, and it is -- it's not fully implemented yet. When it's fully implemented, this is expensive and will be coming more expensive, because there isn't any real control by the patient, by the doctors, and incentives to control costs.

And that means that the government is going to end up trying to do that in the awkward way that government does, which is by rationing care.

CAVUTO: So, I have a theory on this, Senator, that maybe this was good news for Republicans, in that there was a division among the ranks -- I don't know where you stood on this -- that if the subsidies were shot down, Republicans would have been scrambling, especially those in power right now in the Senate right now, to come up with an alternative to take care of the 6.4 million who would have lost the subsidies and as a result coverage, so that your -- the Republicans in the aggregate are grateful that that was avoided.

And now they can start really taking this apart and talking about everything that is I guess bad about Obamacare. What do you think?

CAVUTO: Well, what's your view, then?

CAVUTO: You want to junk it. Right?

CAVUTO: You don't want to tinker around the edges, right?

I mean, look, I have been very, clear. I ran for president in 2012. The reason I went out there and ran for president four years ago was because of this bill and because -- at the time, it was a bill. And I strongly believe that this is a death knell to freedom in America.

Once the government finally takes over, as they are in the process of doing, and controls the health care sector and people become dependent on a government-controlled health care system, the ability for -- you can see it. You see it in Britain. You see it everywhere it happens. The government becomes almost too powerful to control because they control your very life.

CAVUTO: Say that to the kid with preexisting conditions, something you know so painfully well yourself, that, thanks to this law, they say, and despite all your financial concerns, which are quite legit, that they are on the moral high ground here.

SANTORUM: Well, all I can say is they're spending an enormous amount of money to cover very few additional people.

A lot of those people who are covered by Obamacare lost their existing coverage and had to go to Obamacare. You saw in The Wall Street Journal today still tens of millions of people out there who are not taking coverage. Why? Because it's ridiculously expensive.

I can't get -- I get stopped every -- every one of my town hall meetings, everywhere I go, people talk about the dramatically increased cost of premiums that they're paying. And people who are opting out, deciding to go to private -- self-insurance, if you will, just -- you're just risking it because of the increased cost.

This system is not working. Yes, are there people covered? Yes, but most of them, as you see the numbers, are on Medicaid, which means government- run health care.

CAVUTO: Or with higher deductibles through this plan.

CAVUTO: Real quickly, Senator, we just have a FOX poll out now that has you in that 10th spot. So, as things stand now, if this were to hold, that you would get that first debate.

But Donald Trump is second right now. Are you surprised by that?

SANTORUM: ... what I found when I ran last time was that a lot of people get -- go up in these polls and they come down in these polls.

And it's -- that's what campaigns are for. That's why I -- I'm in Omaha, on my way over to Iowa and will be in Council Bluffs tonight. And that is where the...

CAVUTO: So, you think Donald Trump is a flash in the pan, this won't last?

SANTORUM: I like Donald Trump. He is a friend, but...

CAVUTO: You should hear the things he says about you.

SANTORUM: Well, that's OK. People are going to say a lot of nasty things throughout this campaign.

One of the things I try to focus on is on the issues, try to keep it very positive on a personal level, and really focus on what you can do to make lives in America better. And I think that the Republican Party would be better served if we had candidates who would do that.

CAVUTO: All right, it's always good talking to you, even on the phone, Senator.

CAVUTO: Thank you. My best to you and your family.