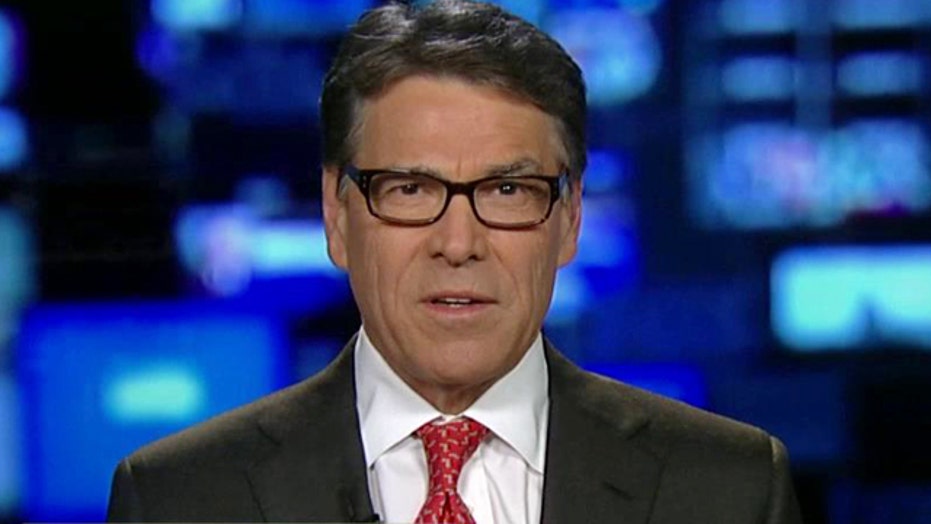 Republican presidential candidate on 'Your World'

This is a rush transcript from "Your World with Neil Cavuto," July 2, 2015. This copy may not be in its final form and may be updated.

CHARLES PAYNE, GUEST HOST: Hola, Cuba, adios, Gitmo? Hours after President Obama announced that we would open an embassy in Havana, the Cuban government now demanding closure and a return of Gitmo. Should we listen?

Republican presidential candidate Rick Perry, he does not think so.

Governor Perry, thanks for joining us.

Obviously, we knew that this would be a chain of events, President Obama promising that if we were to extend this amazing economic olive branch to Cuba, they would return with humanitarian rights. Instead, it looks they're more belligerent than ever.

I -- we are seeing this in negotiation after negotiation. We saw this in Iran. Obviously, the president of the United States not a good negotiator here, giving up positions early on before we ever -- number one, we shouldn't have been negotiating with Iran to begin with, until they did some very important things, the first of which I would suggest to be is to give up all exporting of terrorism around the world.

But this president making mistake after mistake, I see it, from a negotiator, and the idea that -- I happen to think we had Cuba on the ropes economically. They're dealing with a country with a lot of challenges, with Venezuela.

PERRY: And our president throws them a lifeline and then gives away one of our -- or seems to be wanting to give away one of the most powerful negotiating tools that we have. Bad idea.

PAYNE: And to your point, when the president sort of took his victory lap yesterday, he complained about the people in Cuba standing in the hot Havana sun, I guess, withering away in 50-year-old cars.

Well, that proves we were winning. They were defeated.

PAYNE: And all we had to do is put the icing on the cake. Now the Castro brothers will get all the money, I guess, that the hotelers will bring in.

Let's talk about here at home, because today was a jobs report, an abysmal number; 400,000 people dropped out of the job force. Wages went up zero.
What are you going to do if you're elected president to turn this around?

PERRY: Obviously, the economic future of this country I think is going to be pivotal in this campaign and it's going to be a show me, don't tell me campaign. It's going to be, who has really performed?

And when you look back over the most difficult time that this country has had since the Great Depression, since the end of '07 through 2014, there was one place, Texas, that created 1.5 million jobs, while the rest of the country lost 400,000.

So I think there is a real job creator on the Republican side of the field.
And that's me. And I want to lay out a very positive vision, a very powerful, optimistic vision about this country economically, using American energy, using North American energy, I might add, Canada, the United States and Mexico.

PERRY: And that's our opportunity to drive down electrical costs, lower that corporate tax rate, bring manufacturing back into America, and have a renaissance of manufacturing, like this country has never seen.

PAYNE: Well, it's certainly has been promised for a long time.

I want to stick along this line that you talk about, optimism. You gave a speech today talking about the idea that African-Americans could, should, would be part of the GOP. What is the game plan there? Because I have always felt the same. I just felt there just needs to be greater communication and outreach.

PERRY: Well, and I think that's a very important part of it. And I think facts are really going to matter.

When you look at what happened in Texas over the course of the decade-plus that I was the governor, you saw both educationally and particularly -- they have the number one highest high school graduation rates in America are in Texas.

We went from 27th in the nation on our average to second highest overall, with African-American and Hispanic being the number one graduation rates in America. Nothing sends a more powerful message to a family that we care about you than you can get a job, you can keep more of what you work for and we're going to help your children graduate from high school so that they're ready for the next stage of life.

That's a powerful message, and you're going to hear it from us on a regular basis. And you -- we already do that in a very strong way in the state of Texas.

PERRY: Hispanic is nine -- or, I should say, 40 percent more likely to have a job in Texas. You're two-and-a-half times more likely to own your own small business.

The Hispanic population in the state of Texas voted 45 percent in the last election cycle for the Republican candidates. We duplicate that nationally, and the Democrats are through.

But critics will say, hey, come on, oil went through the roof through a long period of time and you guys just rode that gravy train.

PERRY: Well, that sounds like Paul Krugman. And he is wrong and anybody that says that is wrong about it.

Here's what happened in the state of Texas. We diversified that economy from A to Z. Texas is now the number one high-tech exporting state in the nation. The bulk of those jobs are in other areas, obviously, outside.

PAYNE: You're talking big tent. You're talking inclusion. Now, you were also asked today about Donald Trump, some of the comments he has made and the way he has entered the GOP race.

And one thing that is undeniable is that he has made an amazing splash.
He's rocketing up in the polls and he's certainly resonating with a lot of GOP voters. What is he doing wrong, in your opinion?

PERRY: Well, I don't think he is reflecting the Republican Party with his statement about Mexicans. I think that was huge error on his part.

And, number one, it's wrong. When I think about the Hispanic in Texas, and I think about the individuals who have paid a great price, whether they were Tejanos at the Alamo in 1836 or whether it's been as late as the last wars that we have had, when you see Hispanics being killed for America...

PAYNE: With all due respect, he didn't talk about legal -- people who are here legally, Mexican or otherwise. He was saying that Mexico itself...

PERRY: Oh, but I will suggest to you he painted with a very broad brush.

And I think that is the problem. Yes, do we have some challenges? Nobody knows that border better than I do. Nobody has stepped into the fray on that border the way that I have to defend and secure that border.

PAYNE: So, but are they sending bad people over here?

Listen, I guess that's the point, because let's face it. He is resonating.
Now, I will give you this. Corporate America is dumping him like crazy, Macy's, NBC. They're all lining up, even the city of New York. To a certain degree, they may reflect the greater electorate, but it also is just galvanizing and making Donald Trump sort of a legendary figure within your party, because he is standing up, he's not a politician and he is not afraid.

What would a career politician like you say to that?

And I will suggest to you I know how to secure the border. And the border security is the real issue here. It's not painting with this broad brush that obviously I think Donald Trump painted with, where he tried to say Mexicans are bad people, they're rapists and murderers.

Yes, there are bad people that cross that border, but how about let's get a commander in chief that knows how to secure the border?

PERRY: And at that particular time, we can have a conversation about how to deal with this immigration issue, but not until that border is secure.

My way to address this is to talk about the contributions that the Mexican-American has made to this country, knowing that they're the number one trading partner for the state of Texas, knowing that Mexico is going to play an incredibly important role economically in the future of North America with the energy resources that they have, Canada, the United States and Mexico.

You put those energy resources together, you lower that corporate tax rate, you lower the electricity prices, bring back manufacturers in this country, and this region can explode economically. And that's what we ought to be focused on.

PAYNE: All right. All right, sir.

By the way, on that trade deal with President Obama, do you agree? We only have 20 seconds. Do you agree with that or not, the one the GOP just gave him?

PERRY: I happen to think that you have to have the ability to make the deal, but the TPP, the -- we haven't seen what is in that yet. That's up to Congress to make a good decision on whether it's good for America.

Really appreciate having you on.

Content and Programming Copyright 2015 Fox News Network, LLC. ALL RIGHTS RESERVED. Copyright 2015 Roll Call, Inc. All materials herein are protected by United States copyright law and may not be reproduced, distributed, transmitted, displayed, published or broadcast without the prior written permission of Roll Call. You may not alter or remove any trademark, copyright or other notice from copies of the content.