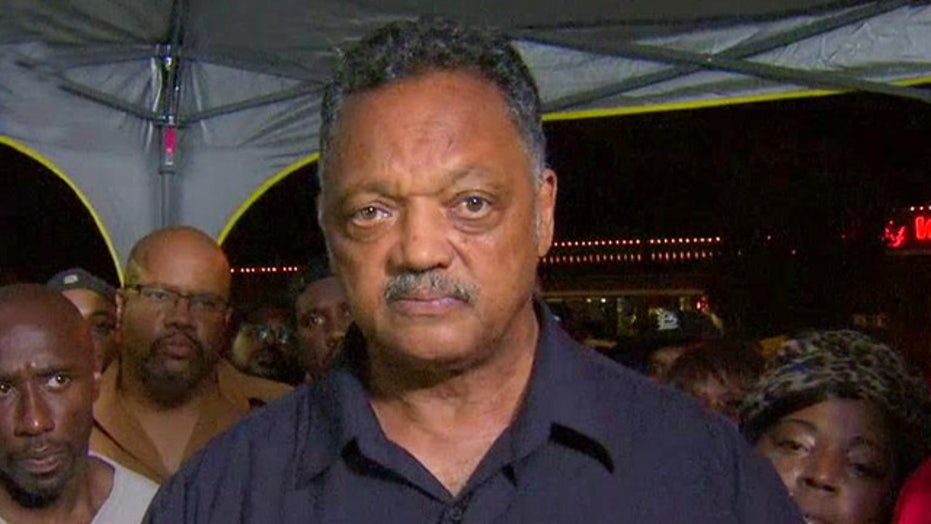 This is a rush transcript from "Hannity," August 15, 2014. This copy may not be in its final form and may be updated.

ANDREA TANTAROS, GUEST HOST: And tonight, demonstrations continue in Ferguson, Missouri, and in attendance at one of those gatherings is the Reverend Jesse Jackson from the Rainbow/PUSH Coalition. Reverend Jackson joins us now live for a "Hannity" exclusive.

Reverend, thank you so much for being here.

JACKSON: You know, when I brought Americans home from prison in Cuba and Iraq and Yugoslavia and the Gambia, it was considered by some to be a distraction. For others, it was a life-saving intervention.

And so there's some need here to express love to this family and support for the family. But also, there's such high frustration here, and it must not become a self-destructive set of actions.

(INAUDIBLE) seven days later, they released the name of the police. They have not released how many times Michael was shot and the way he was shot. That action (ph) compounds suspicion. They release his name, and then some discrediting tapes about Michael. No connection between the tapes and the shooting. And that just simply further arouses suspicion.

And my concern now is that it's not enough to have quietness, which is the absence of noise, but peace, the presence of justice. And the fact of the matter is, the citizens here deserve half the police force, white, black, male and female, or the fire force. There's essentially a lack of trust here because there's such gross injustice and disparities.

TANTAROS: Reverend, earlier on "The Five," Bill O'Reilly called in and he said that you and others, like Reverend Al Sharpton, who has also been weighing in on this tragedy in Ferguson -- he called you a racial agitator and your involvement in these issues to agitate, to ignite, to inflame. Do you think that's what you do?

We've been giving clarity and instruction. We know that you can reshape the iron when it's hot, but you shouldn't turn the iron on yourself. We discourage any kind of violence by police or people. The real riot here has been a police riot. And so they've stepped away.  People are upset, but people are really calm.

TANTAROS: Reverend, what is your take on how the police have handled this thus far? I know that you said that you were upset that they've not released details about how many times Brown was shot. How would you grade how they've conducted this investigation so far and how they've communicated with the public?

JACKSON: Well (INAUDIBLE) they had to have an outside state trooper to come in to bring some police civil order to the relationships here.  What you have here is that (INAUDIBLE) released the police name and then they released disparaging information about Michael Brown which had nothing to do whatsoever with his getting shot.

You know, Michael Vick was put in jail for dogs fighting. Michael Brown was killed worse than a dog. It's just not right. It's not fair. I'm glad President Obama, when they begin to risk (ph) -- risk (ph) journalists, and others step in with a calming voice, his voice is a calming voice. Governor Nixon's voice today was a calming voice. I think Reverend Al, those who've been here, their voices have been calming voices.

No one wants to see self-destructive riots because there's no future in riots. I think that aggressive, nonviolent demands will be significant.  I think people just should go from door to door full voter registration, demanding using their voting power to elect officials who will respond to their real needs. They're not voting for whatever reason has resulted in them being left in a rather difficult situation.

TANTAROS: Reverend, do you believe that the police releasing the surveillance footage today is an attempt to smear Brown? Are you frustrated they didn't release it sooner?

JACKSON: Well, it's an attempt to justify what happened. In other words, because that is this tape, therefore he got shot. They have to...

TANTAROS: But do you think it was...

TANTAROS: Do you think it was designed to smear him?

JACKSON: Of course -- of course, it's to smear him, to make him less worthy of living because this happened. But now it comes out that the police officer that did the shooting didn't know anything about his being a suspect. So this is completely separate. But to release them designed to disrupt and discredit and distort.

That would bring some more relief because it seems like the justice system is going to work. The people here really have the power to elect judges and prosecutors and mayors, who appoint police and fire chiefs.  People here must begin to use -- turn their pain into real political power.  They really have that opportunity.

TANTAROS: Reverend, if you're confident that the justice system will work and it will play out and we will get answers, don't you think then all of this is a huge distraction? I mean, no one really seems to know what happened. I mean, the police chief came out today. He said that the officer was not aware that Brown was the suspect in a robbery. So none of us really have all the answers.

Don't you think that the protests, the rioting, the distraction, the media, the commenting, the racial igniting of division between white and black is a complete distraction from getting the facts of this and letting this play out and letting the police do their investigation?

JACKSON: Maybe this -- maybe this not just black and white, it's wrong and right. You really can't trust a police that there's 56 police and three black in a city that's 70 percent African-American. There's great distrust here for this police department and how it handles people. The police, the judges, they feel that the system has fallen out on them.

It's not enough to be quiet. Quietness is the absence of noise. We need peace, the presence of justice and to be -- and so people here can coexist and live together. Most of these police and firemen don't live in Ferguson, by the way. They work here but don't live here. So they do not share the culture of the people who are the majority of the population -- rather undemocratic.

TANTAROS: Do you believe that Brown was targeted specifically because he was black?

JACKSON: I don't know that. But there is a pattern that creates a strong suspicion. You know, it's Trayvon Martin in Florida. It's Oscar Grant in Oakland. It's Diallo shot unarmed 41 times in New York. It's (INAUDIBLE) rammed in the rectum until he nearly bled to death in Brooklyn.  I mean, and the list goes on.

And this madness must stop. I take the position, you know, if a black shoots a white, it's quick justice and jail time. A white shoots a black, it's rebellion (ph) time. If it's black on black and white on white, it's shrug your shoulder time. Nobody should be able to kill anybody. We must stop the killing. Stop -- the police should not have hard military hardware, tanks rolling down the streets. That was not necessary. And I'm glad that the governor finally removed that and put Ron Johnson, a man who seems to be more civil, with police patrol (ph) and crowd control.

TANTAROS: Reverend, why don't we see more of you in cities like Chicago? I think a lot of people wonder why you and Reverend Al Sharpton and others aren't speaking out on all of the murders taking place. It seems, every other weekend more black children, more black teens, are being gunned down in the streets of Chicago, and yet you're not there.

JACKSON: (INAUDIBLE) a matter of fact, I'm doing (INAUDIBLE) just this coming Monday. I'm there all of the time (INAUDIBLE) funeral (ph).  And so the fact of the matter is, in Chicago...

TANTAROS: ... that type of attention, Reverend?

TANTAROS: Why don't we see the same type of outrage from the black community about these young black kids...

TANTAROS: ... getting gunned down in the streets of Chicago...

JACKSON: Maybe if this is black shooting whites in Chicago, or whites shooting blacks in Chicago, you'd have a different dynamic. That's the nature of our culture. But in Chicago, you do have 50 schools have closed, create great angst, 50 drug stores closed, 75 grocery stores closed, 85,000 (INAUDIBLE). There's a great sense of despair there. And so it's -- that's why I say there's -- there are dry (ph) chips (ph) around the nation and a spark can set it off, whether it's inner city Newark (ph) or Chicago.

These urban cities deserve attention, and we need a White House conference on policy and reconstruction (ph), and these young people need to be back at work learning how to code an app and doing meaningful stuff with their lives.

TANTAROS: Well, I think we can both agree that it is a huge issue that definitely deserves more attention.

JACKSON: ... these young people here to love each other and love everybody. Thank you very much, OK?

TANTAROS: All right. Thank you, Reverend.