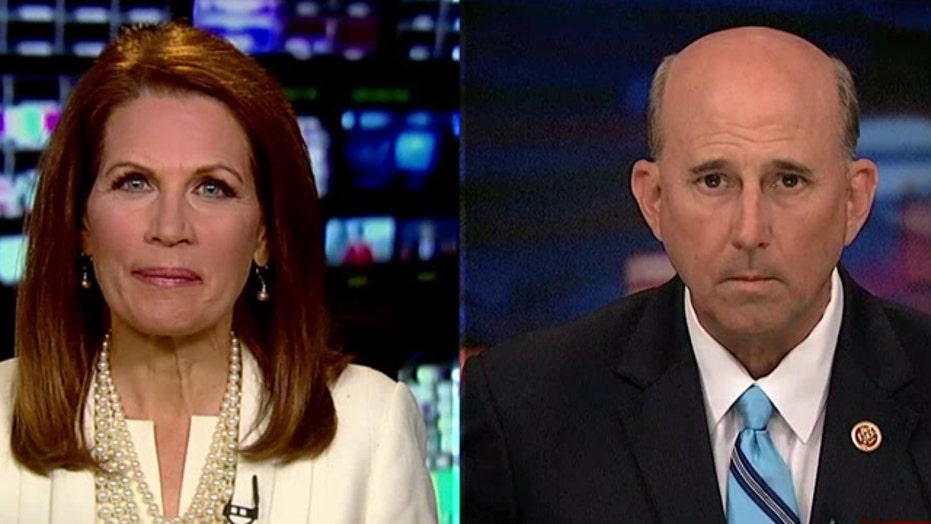 Reaction to the president's immigration action

This is a rush transcript from "Hannity," November 20, 2014. This copy may not be in its final form and may be updated.

SEAN HANNITY, HOST: And joining us now to tell us how Republicans in the House will fight back, Minnesota congresswoman Michele Bachmann, Texas congressman Louie Gohmert.
Louie, you used the same analogy about a monarchy here. Your reaction, and how do you think Republicans are best able to fight back?

REP. LOUIE GOHMERT, R - TX: Well first of all, Sean, when people are saying, Oh, he's not changing the law, he's not making the law -- the law is that if you're illegally in this country, you are not allowed to work. The president has said, well, Congress didn't act, I waited six years, and so I'm going to go ahead and do that.

That is outrageous. That is such an offense to the Constitution. And by the way, Sean, it is so offensive to the African-Americans and Hispanic Americans who have an enormously high unemployment rate. This president has come in and said, You know what? For political gain, I'm going to give five million people the authority to work here, even though that's illegal.  I'm going to do it.

And that's going to leave five million people out in the cold. Now, I understand he's tied with President Carter with over 92 million Americans eligible to work that have given up working. He's tied with Carter.  Nobody wants to be tied with Carter. This will put him way up at another level.

But I also want to point out he quoted Exodus 22:1 here, but if you just go over to the next column -- maybe he hasn't seen these verses, Sean.  "You must not spread a false report. Do not join the wicked to be a malicious witness. You must not follow a crowd in wrongdoing. Do not testify in a lawsuit and go along with a crowd to pervert justice. Do not show favoritism to a poor person in his lawsuit."

This man is showing favoritism, and he's lying about Congress. And I've seen this in another politician I went up against who would call you everything in the book, and then say, now, we're going to be gentlemen, we're not going to talk bad...

GOHMERT: ... about each other, and try to keep you from defending yourself.

GOHMERT: We're going to defend ourselves!

HANNITY: Well, Congresswoman, he did quote George Bush. He did quote scripture. He did talk about this young woman, Astrid (ph), that he's going to kick out, and he did blame Congress. The only thing he didn't say in the speech tonight, that the Islamic State is not Islamic.

But, Hal Rogers of the Appropriations Committee says there might be issues in terms of the use of the power of the purse. Is that a problem in dealing with this in terms of the Republicans?

REP. MICHELE BACHMANN, R - MN, FMR. PRES. CANDIDATE: Well, you know, when I was watching this speech tonight, Sean, I felt like I was watching Jonathan Gruber, to be honest with you, because all I heard was contempt for the American people, as though he thought we were so stupid that somehow, he could say that his illegal actions were legal and we would all turn over and roll over and believe it.

It's not true. Senator Jeff Sessions is exactly right. Congress has a responsibility to uphold the laws of the land, as well. And we can defund this president's illegal amnesty. That's what we must do. We can't do it alone.

So it's a very quick three-step plan that your viewers need to help us with. We can't do it alone. We need your viewers. Congress will be back December 1st through December 11th. This will be decided in that period of time.

But I'm calling on your viewers to come to D.C. on Wednesday, December 3rd, at high noon on the west steps of the Capitol. We need to have a rally. And we need to go visit our senators and visit our congressmen because nothing frightens a congressman like the whites of his constituents' eyes!

BACHMANN: But we need to say, you're not going to do this with our Constitution. And so I'm asking your viewers to join us Wednesday, December 3rd at high noon on the west steps of the Capitol. Come, rally, and then go visit your senator and go visit your congressman, and you can make the difference and we can get this thing defunded. We can do this, but we need the viewers to come and help us.

HANNITY: All right, thank you both for being with us, Louie Gohmert...

GOHMERT: A majority of Americans want the border fixed, and we passed a bill to do that in July. He needs to take that bill up.

HANNITY: That's a good point. You guys did pass that, secure the borders, and even if you did pass it, he wouldn't sign it anyway. So it's interesting, but -- in terms of his comments tonight.

All right, we'll continue on the constitutionality, the legality of the president's actions tonight.