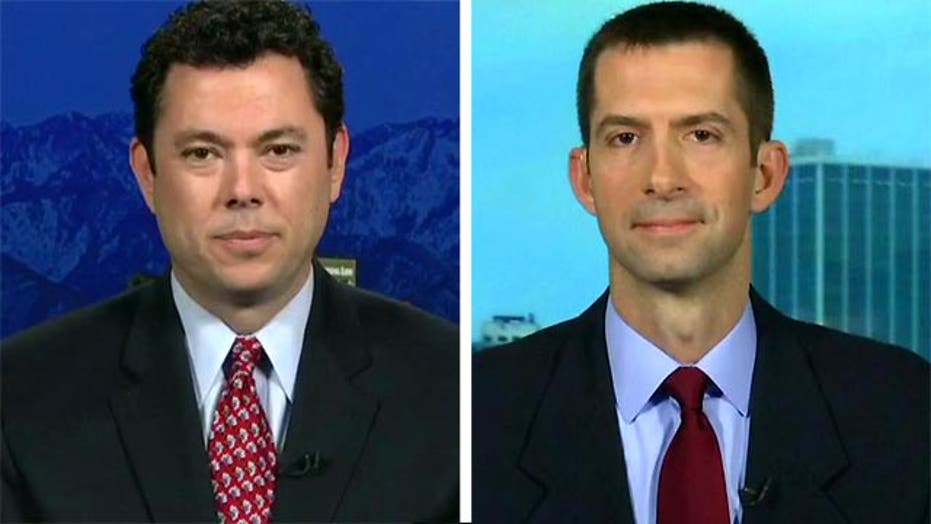 Congressmen react to the nation's problems

This is a rush transcript from "Hannity," December 13, 2013. This copy may not be in its final form and may be updated.

SEAN HANNITY, HOST: Here with reaction to the lie of the year, much more, Utah Congressman Jason Chaffetz and Arkansas congressman, running for Senate, Tom Cotton.

Guys, good to see you.

HANNITY: Congressman Cotton, I see you're leading in the polls there, red state Democrat, Mark Pryor?

REP. TOM COTTON, ARK., CANDIDATE FOR SENATE: Yes. Well, even a so- called fact checker like Politifact knows that the president's promise that you can keep your health care plan if you like it was the lie of the year. Mark Pryor says he just learned that a few months ago with the rest of us, yet he voted for ObamaCare and he voted for the very regulation that is causing people to lose their health insurance.

COTTON: So I guess he didn't know or didn't understand...

HANNITY: Didn't he make the same...

HANNITY: Didn't he regurgitate the same talking points as the president?

COTTON: Absolutely. He's been saying for four years that ObamaCare would help you protect and expand your choice of health insurance, and if you liked your health insurance, you could keep it. So I guess he didn't know or didn't understand what he was voting on, and the people of Arkansas realize that he's directly responsible for up to 50,000 Arkansans losing their health insurance and every Arkansan facing the possibility of doubling and tripling premiums and higher deductibles and higher co-pays.

HANNITY: All right, your -- your race is one of the most important to watch as we head into the 2013 election year.

Congressman Chaffetz, you know, all's said -- all's good said and done here, but the bottom line is that this is still the law of the land. The president just will not budge, won't make any significant changes, just one delay after another. I think a lot of it is lawless. I don't think he has the right to issue edicts and change provisions of the law the way he has.

What else is available for those of us that'd like to see this law eliminated?

REP. JASON CHAFFETZ, R-UTAH: Well, we've voted more than 40 times to eliminate it, to delay it. The sad reality is it's people's health care, and they're really going to suffer. And President Obama's going to be the leading candidate to win this award next year when people start to get the sticker shock and understand that they're not going to be saving, on average, as he said, $2,500 per family per year. That, too, was a perpetuation of untruth that is just -- it's going to be shocking to people!

And it affects real Americans! We laugh and joke about parts of this because the president puts up these characters out there to try to perpetuate this -- this thing called ObamaCare and get people to sign up for it. But it's real people's health care!

All right, I was surprised, Congressman Chaffetz, you actually voted for the Ryan-Murray budget. Why did you vote for that?

CHAFFETZ: Well, you know, I -- I -- that's not the way I would have crafted it. But doing nothing I think would have been worse. Keep in mind, under sequestration, you did not have cuts to other spending programs. You had cuts in defense spending.

I mean, look at what's going on in China right now. I voted to cut defense in the past, but there comes a point where this president -- the only thing he's willing to cut is defense. And I just don't think we can keep going to that well, given the fact that we've got to be able to move this country forward and make sure that we can fight on many fronts.

HANNITY: But the bottom line is there's more spending in the front years, 2014-15. You don't get until years nine and ten do you get any potential savings. And you know and I both know that future Congresses are not going to be beholden to whatever those cuts are years down the road. So this is basically more spending. Isn't that just the reality? Isn't that the fact at the end of the day, that's what's going to happen?

CHAFFETZ: I think part of what we did -- for instance, new future federal employees have to contribute more to their retirement. That adds up by the tens of billions of dollars. That is something that will continue on in perpetuity.

I do think it was the right thing to do. I -- I -- believe me, we have to change elections. I mean, that's the bottom line here. I think Paul Ryan was absolutely spot on to this. We are in divided government. We have got to go out and win these elections. That's about the best I think we could do...

CHAFFETZ: Doing nothing was worse.

HANNITY: All right, let's say we take the Senate, and you're going to have to start referring to your colleague there as Senate Cotton, which I want to have happen. But let's say that happens. You get the Senate, go into office in 2015. You have the House and the Senate, but then you still have Obama as president.

So then what are the Republicans going to tell us, we got to really -- we got to win the presidency first. So now the earliest we can deal with record deficits, $25 trillion in debt, $90 trillion in unfunded liabilities is, what, January of 2017?

CHAFFETZ: Well, the other thing I want you to remember is the budget is a ceiling. Now we get to have the 13 appropriation bills. Doesn't mean we have to go up to the budget. We're going to be offering striking amendments on the floor of the House. And I hope that we come in under budget. That's -- if you don't have regular order...

HANNITY: When does that happen?

CHAFFETZ: Well, we haven't because we never had a budget framework that we could get the Democrats to agree to.

HANNITY: All right. I'm not blaming you, don't misunderstand.

HANNITY: Just the way the bureaucracy is working, it seems to me the same old, same old. And maybe what I'm looking for is the Republican Party to offer a plan to balance the budget and be bold and explain to the American people how dire things can be in the future.

Congressman Cotton, you voted against the deal. Why did you vote against it?

That said, I have good friends and allies on both sides of this matter, like Jason and for that matter, Paul Ryan, in whom I have enormous respect. And Jason highlighted a couple of the good measures in the package, the increased military spending and the contributions from federal civilian employees.

But overall the increase in short-term spending, as well as, in my opinion, the unfair way that military retirees were treated versus civilian retirees meant that the cost of the package outweighed the benefits.

But as you say, the real problem doesn't lie in the House. The real problem lies in the Senate. That's one reason why I'm running for the Senate, so we can have budgets that do balance, that control spending, and we can send them to the president and make him finally face hard decisions that Harry Reid and Senate Democrats like Mark Pryor have prevented from taking for five years.

HANNITY: I don't think this president -- there's no inclination, there's been no evidence in the five years that he's been president that he has any desire to move away from his rigid ideology. Period!

CHAFFETZ: Well, Sean, look at what happened last month with the insurance cancellations. For several weeks, the president and his aides were calling individual policies the Wild West and unregulated and substandard.

And when the political pressure got too intense, they did a 180 flip-flop. They started lugging (ph) -- they said that you can keep your unregulated Wild West substandard policy. And don't be surprised as ObamaCare continues to unfold as the fiasco it is if they continue to back pedal.

And I hope you'll see that starting January of 2015, when I'm in the Senate and the Republicans control the Senate, that they start to back pedal on some of their claims of increased spending or some of their desires for higher taxes, as well.

HANNITY: All right, guys. Thank you both for being with us. Appreciate it. Good to see you. Merry Christmas, if I don't see you.