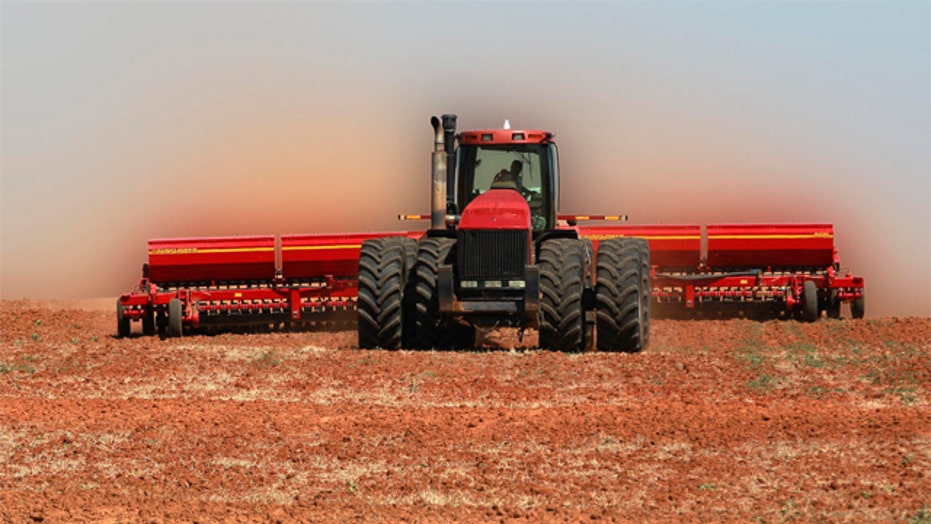 REPORT: SOME US FARMERS PLANNING TO HIKE FOOD PRICES TO PAY FOR COST OF HEALTH CARE LAW

JOHN LAYFIELD: Surprise, Surprise. This is what happens when you pass a law that no one has read. The problem here is that we have a lot of undocumented workers that we are trying to give insurance to, and also we have simple margin of error. This has to go directly to the consumer. Our economy has no shock absorber to absorb something like inflation. This isn't a huge spike, but it is inflation.

JONAS MAX FERRIS: At the end of the day, most businesses are not like Apple, they have a very tight margin. Any additional cost is going to get past on to the consumer. It's not going to destroy the economy any more than having health care in another sector would destroy the economy.

GARY B. SMITH: Food in the average family budget is about 14 percent of their budget. It is the second biggest expenditure behind housing. Let's say food prices go up 10 percent, the average spending then increases 1.4 percent. It doesn't sound like a lot, but we've really increased inflation almost 50 percent. I think that's going to hit people in their wallets. President Obama said he would bend the cost curve, I think people are going to find its being bent around their necks.

TRACY BRYNES: Brenda, you and I might be the only ones that food shop here. I think that prices are ridiculous now. I can't afford for these prices to go up more. The farmers in California can't pick up and move like other industries can. The taxes in California are rising and they aren't going down any time soon. This is going to hit people in the pocket. It's going to hit low income people especially.

DAVID MERCER: I don't think its going to threaten the economy. The cost of labor is going to more accurately reflect the cost of healthcare. The market will adjust to it accordingly. Employees will have more access to insurance; it will not have much impact on the economy.

GARY B. SMITH: We need to make a concerted effort to be energy independent. In 2005, net imports of all energy were about 30 percent. This past year alone, that figure is already down to 18 percent, it's projected to be 9 percent in 2040. If we make a real effort, with fracking, oil, and even that silly green stuff, I think we can have the next Internet age, as far as industrial production, we can be energy free, and we can have a much safer America.

JONAS MAX FERRIS: One of the rules of economics is that you go to where the cheapest supply is; if the Saudis have cheaper oil, we should use it. That's just the way it is. If we don't buy it, someone else will. We aren't going to out drill the Saudis. We have had a huge technology boom that has boosted our oil production to Saudi levels, but if we drill all of ours they will have the last of the oil and be more powerful. We should use their oil first.

TRACY BYRNES: They hate us, so who cares if their product is cheaper? We have so much of it here; we know that OPEC is getting nervous already about how much we have here. If it wasn't for the regulations that are preventing us at getting it out, then we would be energy efficient. We could be energy efficient much faster than people think. It is the regulations that are coming out of Washington that are preventing this.

DAVID MERCER: As Gary pointed out earlier, we are reducing our dependence when it comes to energy, and we should continue along that source of action. It's a larger issue when it comes to Egypt. The Saudis aren't the only ones supporting the current military government. Israel is lobbying for us to continue aid to the government, and on the other hand, the Turks and Qatar are helping the Brotherhood. We need to work with our allies on both sides to bring stability to the region.

JOHN LAYFIELD: The Russians have lost their one naval base in the Mediterranean due to the Syrian civil war. They have said they will have a permanent base in the Mediterranean, it will be in Egypt. That is another group that is now influencing politics. The Middle East is in turmoil. Oil prices are probably going to stay high. Even if we are energy independent, it won't lower oil prices globally, but it will alleviate any problems of political risk in the Middle East.

TRACY BYRNES: It's a service business; we tip in our service businesses. When you give a nice tip, you do get better service. What happens if that goes away? Where is the incentive to do well? They're going to get paid whether they're nice or not, unless you tell their boss when they're not, no one will ever know. I actually prefer to tip for a job well done.

GARY B. SMITH: In a number of restaurants that have tried this, they have found the employees are happier and they actually make more. I think it's a good idea. Most people struggle with how much to tip. I don't go back to restaurants enough times for my one generous tip to affect my service. I like this.

DAVID MERCER: I waited tables when I was a college student, and I can tell you that I had a lot of incentive to get more than 10 percent or 15 percent. I wouldn't have that incentive if I was pooling tips. I think we should leave it as it is.

JOHN LAYFIELD: If you want to kill a company, give guaranteed salaries to everybody. That kills incentive. I think everything should be based upon meritocracy.

JONAS MAX FERRIS: In most of Europe and Japan this is how it's done. In Miami there is no tipping. It's very European. You can still tip on top of your bill if you want to. I just don't think it's necessary to have tipping.

GARY B. SMITH: Gap (GPS) gets back-to-school boost and racks up a 25 percent gain in 6 months