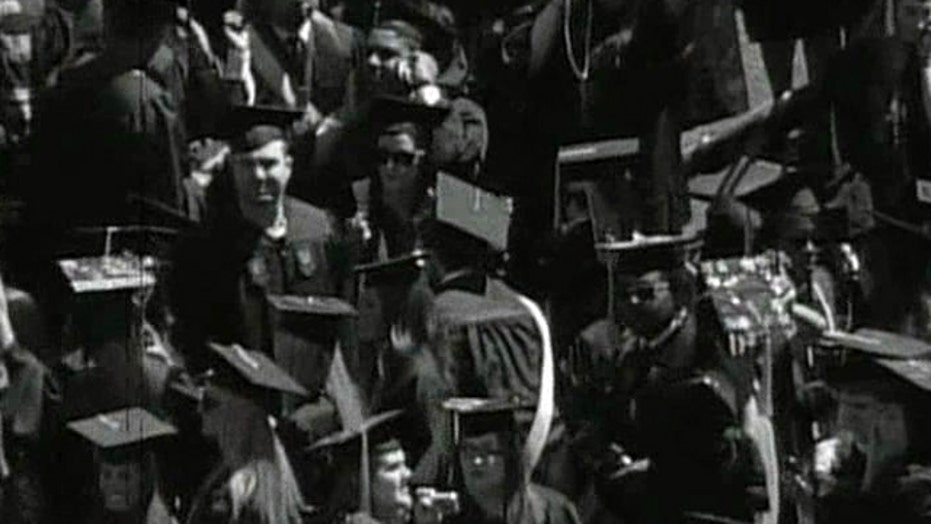 IN FOCUS: TIME FOR THE GOVERNMENT TO GET OUT OF THE STUDENT LOAN BUSINESS?

STEVE FORBES: It's a prime example of good intentions, bad results. As a result, college costs continue to go up, it's killing the middle class both for parents and for kids. Instead of being a catapult in a career, it's now an albatross with the debt that you leave with. The degree now becomes a degree of indebtedness. I think there will be big changes, get the government out so colleges can cut costs and have it be 3 years instead of 4 years and online and those kind of reforms so you can get an education to get ahead, instead of starting out behind.

RICK UNGAR: I acknowledge the problem, this is difficult for the kids, difficult for the schools, but there is a critical public policy issue here that we can't forget. If you take away student loans from the government, what you're really saying is that from this moment forward, only people with money can go to college. We do not want a country where you have to be wealthy to go to college. This is not the way to save the middle class. This is the way to destroy the middle class.

RICH KARLGAARD: College costs have gone up 7.5 percent per year over the last 20 years. Why? Because they can. The government loans will always be there. This bubble is going to pop. Even state universities costs prohibitory right now $30,000 per year most kids are not going to get any kind of return on that investment, they are going to default on your loans. This is just a big bubble that is going to pop and do damage to the economy.

MORGAN BRENNAN: The whole system needs to be revamped and we need to take a look at government loans. I think right now, it's still the lesser of two evils. Let's look back at private loans, just for a second, yes they might be doing credit history checks but they are also doing variable interest rates that are going up to double digits if you default on that loan. The repayments options are much more stringent than they are for government backed loans. Now you have companies like Sallie Mae who are bundling their higher risk loans and selling them off in so-called ‘slab' loans. That is still an issue, want to talk about a bubble that can have ramifications beyond student loans, look at private loans.

ELIZABETH MACDONALD: The subprime crisis, no income, no job, no problem, we are going to give you the loan. No income, no job is what students are faced with right now. This is the problem; it's the universities and colleges that are gauging the middle class family. Charging degrees for the cultural impact of soap operas and that's the issue, the business model for universities and colleges is really cushy, they are non-profits, they live off the taxpayers nickel and it's not right. I would say this to you universities, stop gauging middle class families, get the degrees that are useful in the workforce, and get this, if you give degrees that you can get jobs with, maybe you can get rid of the 83 overlapping federal worker training programs at the back end and do it right in the beginning with the colleges doing the right thing by middle class families, getting them the jobs their kids deserve.

JOHN TAMNY: Rick talks about how if the feds get out of student loans, colleges will only be for the wealthy, but that's what's happening, the feds are involved in student loans. They allow colleges to not worry about charging students more and more to attend them. If you remove the government distortion, colleges will have to bring costs back down. If a college degree is as valuable as Rick says, banks will very readily loan students less money so they can go to college at a much lower price.

RICH KARLGAARD: This 32 percent that you cited was verified by HHS secretary Kathleen Sebelius. I guess her plain spoken Kansas nature couldn't hide the fact like President Obama does. It's going to get worse, a recent survey of companies now say that 50 percent of companies are going to drop out of covering insurance for their employees despite having to pay $2000 per person penalty to do. A year ago, the survey showed 30 percent. Every time you look at this monstrosity the news gets worse.

RICK UNGAR: Rich is right when he says that the results were verified by HHS secretary Kathleen Sebelius but unfortunately leaves out some details, as has the media. This kind of study makes great headlines but let's get into a few of the details. Number one, this only applies to individual marketplace, that's about 10 percent of people buying insurance. Number two, it does not speak to premium costs because it's not taking into consideration that it's in the individual market where you are going to see the subsidies. This is important. It also doesn't talk about the $20 billion fund for reinsurance created by ObamaCare that will lessen the impact of this. You have to dig into this much deeper. It's not what you think.

STEVE FORBES: What they also leave out, is that people will game the system. Now that you can get insurance anytime you want why pay up? Pay 2,000 year in a fine instead of $15,000 a year. And subsidies, where does the money come from? So when you get sick you get the insurance, otherwise not. You are going to have higher costs because people are only going to get it when they need it. For younger people, this is going to shaft them; their insurance costs are going to go up even more because they don't have those massive subsidies. They are taking it from the elderly.

ELIZABETH MACDONALD: My mental health premium is going to go up listening to what the President has said. The CBO has already said that it is going to up 13 percent, that's what premiums are going to go up under ObamaCare. Aetna CEO said already 20-50 percent, California Blue Cross continues to try and hike health care premiums after health reform. Why? Because they have figured it out, they say, you know what? We are just going to pay the penalty. We aren't going to pay for health care right now, we are going to wait it out and what happens is, you get sicker people in the pool. That's why the health exchanges that we the federal taxpayers, talk about subsidies, the subsidies are paid for by federal taxpayers. We are going to have to foot the bill for those insurance pools that go belly up, just like California's did in 2005-2006

JOHN TAMNY: If you offer more, it's definitely going to cost more. This is yet another federal government disaster. The simple truth is that there is no health insurance without healthy people. As Steve and Elizabeth have pointed out, healthy people have no incentive under ObamaCare to get insurance until they absolutely need it. What you have is the least healthy going in for that insurance in a big way and that's naturally going to drive up prices. Rick talked about last week how there shouldn't be one size fits all for colleges, why does he want one size fits all for healthcare?

SABRINA SCHAEFFER: I couldn't agree more with almost everybody here is that we have tried to create a one size fits all. The majority of ObamaCare isn't going into effect until 2014 and we have hundreds of these provisions which are going to drive up premium costs. Think about the provision that says so-called children can stay on their parents' insurance plan until they are 26. At 26 I was married, but now I can be on my parent's plan this is going to drive up costs for families up to $450 and we haven't even gone into the guaranteed issue provision. There are serious costs.

FLIPSIDE: PAY AS YOU WEIGH...

JOHN TAMNY: I think about profits first, is probably a good thing. In this case, maybe if one airlines experiments with it and succeeds it is something that could expand across others and if it doesn't no one will do it. I think it's important for airlines to experiment with ideas. That's how we move forward. Failure is the best teacher maybe this is one of them.

STEVE FORBES: This is a mother load for trial lawyers, discrimination. Scales at the airport, its bad enough the TSA makes sure you're declaring the right weight. And to traffic, most of us are overweight so we are going to be humiliated at the airport, travel less, this is an absolute non-starter. Talk about discrimination. Asians, generally, are smaller than Caucasians and African Americans. The discrimination suits will fly. Any airline that tries it will be weighed down by bankruptcy.

SABRINA SCHAEFFER: I'm not saying this is a good PR campaign nor do I know how they will practically implement this but if it costs those more to provide a service to one person than another person I say they have a right to try this. I do think it will be difficult but we all know it costs more, the heavier the plane is. The economist actually had a report saying if a plane can reduce its weight by 2.2lbs, it can save them up to $3,000 in fuel for the year. So I think they have an incentive here.

RICH KARLGAARD: Weight is a really serious concern. When you are taking off from Denver on a summer day, I've been on a flight where 20 people had to be off loaded or the plane wouldn't get off the runway and those runways are awfully long in Denver. Steve is right, this is just cruel, we don't need to do it, and it's kind of self-limiting because the seats kind of limit how big people can be in order to fly, particularly in coach. Don't go there airlines.

RICK UNGAR: this is nuts, I won't be able to afford to fly anymore; I've gained a few pounds. It's crazy, I think the guy who came up with this weighs 105 lbs, he must.

INFORMER: Strong first quarter results, now give our viewers stocks to own for the rest of 2013