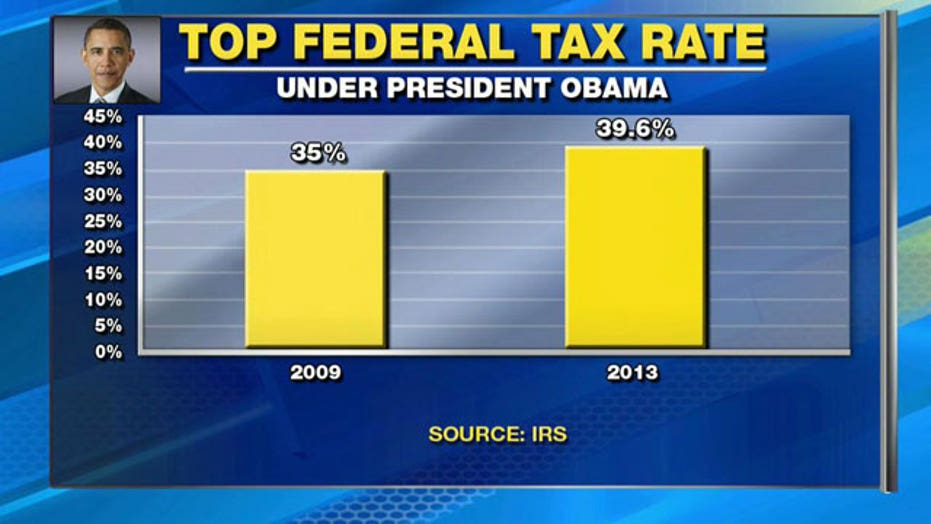 Time to end tax hikes in favor of a flat tax?

TIME FOR A FLAT TAX?

Steve Forbes: The last time they tries to simplify the code back in 1986 David, they did a little bit, but since then, it's been changed 15,000 times. The tax code is an abomination, it hurts job creation, hurts people from getting better paying jobs, politicians in Washington love it. Lobbyists love it. But it hurts hard work; it hurts risk-taking; hurts success...we ought to get rid of it, start over and have a tax code that you can understand with a single rate exception from adults and children, and that's it...and let the American people go back to real work instead of coping with this thing that's a dead weight...and just brings out the worst in all of us.

Rick Unger: As you know David, I've never had an allergy to the flat tax. I think conventionally it's okay. Here's where my problems come into play. One I don't think we will pervert that....special interests will always show up even to get a flat tax. Two, I'd love to understand how we get to the 20 percent number. The truth is, people would say their taxes are too high even if we institute a 20 percent flat tax. That's how people are. But I'd really like to know if someone can answer it...why 20 percent?

Rich Karlgaard: You know, there's a real moral imperative...keep taxes lower and flatter right now... It does create jobs and it instills this sense of fairness...Right now this country is being torn apart because of this pervading since of unfairness...trust in govt. institutions is at an all-time low...it's bi-partisan across the board...which is why everyone should support this...I will answers Rick Unger's question about why 20 percent--because study after study after study...Hoover institution and others...shows the optimal size of the federal government. is about 20 percent...actually about 18 percent of the size of the GDP.

Elizabeth MacDonald: Yeah, I think you could do it...the question is, to Rick's point...I think the president seems to drop between the raindrops and never seems to get touched by anything, like France's Jacques Chirac. You are right. It has been simplified beyond all understanding. The question is, and to Rick Unger's point, we have career politicians. Charlie Rangel has been around since the Nixon administration. The problem if you do a flat tax, it could layer on a value added tax...which for DC is like giving the keys to a drunk to a liquor store. I say do the flat tax. It's striking that communist companies like Kazakhstan, Russia and Antonia have one...and we don't. We have a tax code to entrap, even as the taxpayer advocate has said.

Bill Baldwin: I think the virtues of flatness have been greatly exaggerated. Now I'm all for simplification. Steve Forbes is right to be harping on that tune. Why after all if you have a kid in college, should you be filling out a form that asks you for your American Samoa exclusion...and then asks you about your domestic production activity. This is absurd. I'm in favor of getting rid of all of that. But I don't think flattening the structure and taking it 40 percent down to 20 percent is going simplify anything. We still have all this absurdities. And the question is how much do the rich pay and how much does the poor pay.

STEVE FORBES: David, not only hurt housing but hurt the country. The EPA doesn't want to make a distinction between a mud puddle and the Mississippi river. This is a pure power grab. Trying to get more control over our lives. These elastic definitions. They are going to have control over that.

BRUCE JAPSEN: I don't know. I think this may be a little overblown. But in California, I think the drought may have turned a lot of rivers into tributaries. But I think what the EPA is doing with homebuilders...their statistics is going that confidence is slowed a little bit but their numbers out this week show the future looks good. Though, I don't know if this is a big deal.

RICH KARLGAARD: Well, the Obama administration makes no secret of the fact that it wants to create more urban density. It thinks that's ecologically good. You can make an argument but it does take away people freedoms to choose where they live....If you really want to a great source of this on Forbes.com, Joel Kotkin, has been documenting this over the last couple of years.

Elizabeth MacDonald: I fear that it is...it's not just the EPA...the EPA issue now, just reading into it, is a serious one. I think that it's concerning. I'm not sure how far the reach will go. It is a concern about pollution...we want to clean up the country....we want to clean up the planet-do that, yes. But, when you look at what's going on in other parts of the administration...you look out west where the government owns 80 to 90 percent of the land in six states...and moving to erect solar farms...when we've go private businesses really unlocking oil and gas...20 to 30 thousand private businesses...that's the thinking in the administration that we can do better than what the little business owner can do?

Bill Baldwin: Now here's a question, how did they end up redefining navigable waterways to include puddles? The usually stretching of definitions. There was once a famous case where the California fish and games commission defined the butterfly as a fish so they could issue a regulation. So how does the EPA crush homeowners? In lots of ways. First, they came after your shower and faucet...then your washing machine came under their control...and now it's your side yard, you fill in a low spot and throw some grass seed on it and you've violated the scenic water's act-or something like that.

Rick Unger: I can't believe you think I'm any kind of a nose conservative. Where did that come from? I'll give you this much. I did read the proposed regulation. It is a bit over the top. I grant you that. However, it's also over the top to suggest this is going to have any significant impact on housing. It's not. Most housing is not build anywhere near a situation. Are they going too far? Yeah, I probably think they are... but it's not going to have this horrible result.

Highway Fund running out of Cash

Rich Karlgaard: I think we need more private ownership of roads. We can do things a lot faster. A great example a few years ago where Indiana sold three billion dollars worth of Indiana highway to some Brazilian operators. The roads got better. And Indiana solved its deficit problem. We had private incentives at work.

Bill Baldwin: If states want to start to privatize then they should start with education by letter every kid attend a charter school if they want to. After all, you could have two schools, five blocks apart, competing to get the best teachers and the best students. But have two thruways, side to side - is a total waste. And chaos.

Rick Unger: That's what my suggestion would be...I think you will be surprised. I don't think they will be lining up to buy these bridges and roads as much as you think. I'd go for a pilot program for ten to twenty years...put some in there, see what happens.

Bruce Japsen: I don't think there's an issue with trying...out here on the prairie here there are big potholes...and letting the highway fund run out right now is not a good idea...but I wouldn't be opposed to a pilot program...we're doing that with Medicare and private companies...the administration has been open to that...but letting it run out is not a good idea.

Elizabeth MacDonald: Yeah, why not-but who will be in control of that pot of money. I am with Rich Karlgaard on this...I think it's a great idea. But the problem is trust fund now has turned into a pork wagon for state and local officials have used it to run over taxpayers with weird projects that have nothing to do with the roads...things like museums, bicycle paths, horse trails...I'm not opposed to the latter two-we just have to make sure it's in a lockbox which is yet to see.

Steve Forbes: The highway trust fund alone was made for highways....the freeway system around the nation...leave it alone instead of using it for all these other things. But david we already have an experiment on the underway, it's called the National Railway System. We deregulated them 30 years ago. Now we have the best system in the world. And FedEx, do we have a problem there? No. If people do it, you'll have a mixed public and private...but the more private, the more you get maintenance and this stuff done.

STOCKS TO GET YOU ON THE FORBES RICH LIST

It's a big clinical laboratory. Gurus at the top hedge funds are looking as a long term play because it can move big-time into genetic and molecular diagnostics.

William Baldwin: They go along collecting samples from doctor's offices...what happens when the doc gets desktop blood analyzer? I think this company becomes worthless.

Specialty insurance. For example, they will cover you if your bar has a bar room brawl. And especially insurance lines have better profit margins.