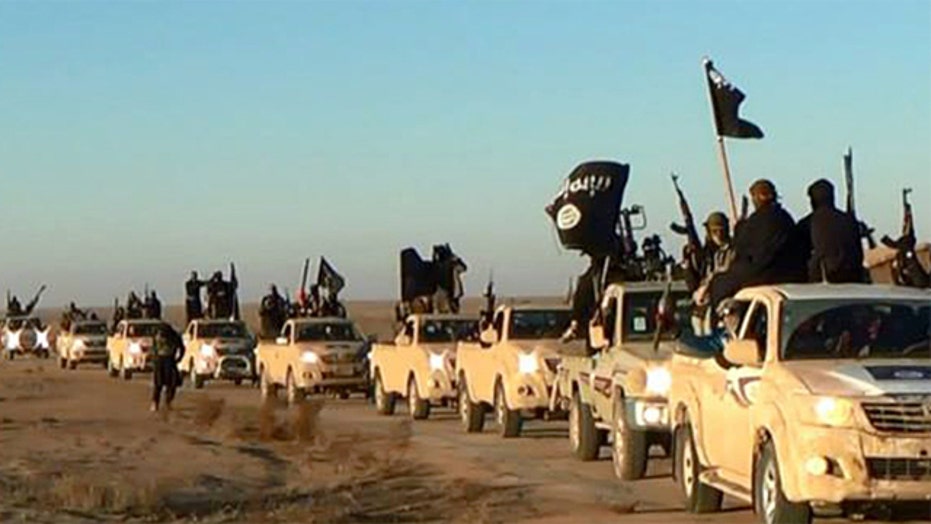 Report: ISIS militants planning to sneak across US border

US leaving the door wide open for the most dangerous militants on the planet?

REPORT: ISIS MILITANTS PLANNING TO SNEAK ACROSS THE BORDER

WAYNE ROGERS: This guy, Francis Taylor, the same guy who is a senior official with homeland security-- he's denied this. He said, you know, "there's no way this is ultimately going to happen. We'll catch them, we'll do all of those things." In the meantime, a journalist tested that theory. He goes down to Mexico, comes across a border wearing an Osama Bin Laden mask, and he's not stopped. How crazy can you be?

MICHELLE FIELDS: Remember, ISIS is making a million dollars a day; at least a million dollars in oil revenues. So they have the money to do that. Mexican cartels-- what they care about is money. That's all they care about. So the possibility that ISIS will give money to Mexican cartels to help them is very likely. CIA estimates now show that ISIS has about 20 to 31,000 members. The members continue to increase every time they have a little bit of success. All you need is one of these people to cross the border to inflict harm, and we have an open border to do that.

JEHMU GREENE: I disagree that the border is "so porous". Didn't you also tell James O'Keefe to stop; that enough was enough?

JONATHAN HOENIG: You want to copy the Saudis now? You think they have a ton of great ideas? I disagree with that. This whole "secure the border" nonsense-I honestly think it's a red herring. It is a GOP power grab to limit immigration, just like the Patriot Act, just like the whole Department of Homeland Security, which Bush invented, by the way. This is just another way to control our lives. There's no way to fence in the United States. We've been trying to keep drugs in for decades, we haven't done that. The idea is really what's wrong; this whole idea that if someone is attacking you, you hold yourself up and try to build a fortress. That's exactly wrong. You go on the offense; you destroy the enemy. That's the only way to keep us safe.

MICHELLE FIELDS: Of course the bad guy. It seems like everyone is going after the NFL Commissioner. I'm sorry, but last time I checked the NFL Commissioner didn't knock out his wife. When Chris Brown beat up Rihanna, people didn't blame his record label. When Charlie Sheen choked his wife, no one blamed CBS. Now everyone is going after the employer. Unfortunately domestic abuse affects people in every single industry. That doesn't mean we should go after the people's employer. When you do that, you're shifting the focus away from the person who committed a very heinous act, and shifting it to an employer who has nothing to do with it.

JONATHAN HOENIG: And it's their responsibility. To Michelle's point, domestic is criminal assault. It should be prosecuted by the courts and by the police, not by the public, not by twitter, not by the NFL. The league may or may not want to fire him. Listen, they can do whatever they want. It's a private league. They could hire sex offenders for all I want. But the one fact that matters, again, to Michelle's point, is who committed the crime. It was Ray Rice, and he should face the consequences.

JEHMU GREENE: I feel sorry for her. When it comes to the NFL, if they're going to lie about what they knew in this incident and try to actually blame the victim, which they did, and what the Baltimore Ravens did by putting some of the responsibility on his now wife, and if they give these players a platform in which they become national role models, then yes, there is every opportunity for Americans to say "were going to vote with our wallet. We're going to hold them accountable." Guess what? What I'm outraged about is the fact that this $9 billion company is a tax deductible effort that we are all impacted by as taxpayers.

WAYNE ROGERS: It's crazy, Eric. You touched on this on The Five this past week, and Michelle is exactly right. The employer-- there was a time, an old-fashioned morals clause in most of these contracts. I don't know if it still exists or not, but it's a legal question; it's not a moral question, and the league is not the employer in this case, the Ravens are. That's who his contract is with. So to blame the league and Roger Goodell-- it has nothing to do with it. I mean why is the league even involved? The media is promoting this. This is just outrageous.

NEW POLL: AMERICANS THINK THE BIGGEST PROBLEM IN THE U.S. IS THE "GOVERNMENT"

JONATHAN HOENIG: Americans get it. They understand that government is potentially the biggest threat to your life; not just your livelihood, but your life. Why? Well, government is force. They've got a legal monopoly on the use of force. That's why in this country government is limited. I mean it has the guns, it can literally do anything. It can tax you to death. But think about North Korea, Cuba, Soviet Russia-they can put you to death, that' why in America the whole notion is "limited government" where it protects you. It serves you, you don't serve it.

WAYNE ROGERS: I think these are shifting priorities all the time, but the immediate one of the threat overseas from terrorism. That's going to affect everything. That affects the economy, because you've got to build up the military. That affects our safety and our freedom, because it means there's going to be a certain amount of clamping down on that. That's immediate. The long term effect is yes, the government is a danger.

MICHELLE FIELDS: The reason why Americans don't like the government is because they know the government right now is run with all of these pajama boys who don't know what they're doing. All of the problems that we have in America have been caused by the government, or the government has made it worse. If we want to fix it we have to get to the root of the problem, which is cleaning house in Washington. Don't blame Republicans, Jehmu, for these problems because if you remember the Democrats had the House, the Senate, and the White House.