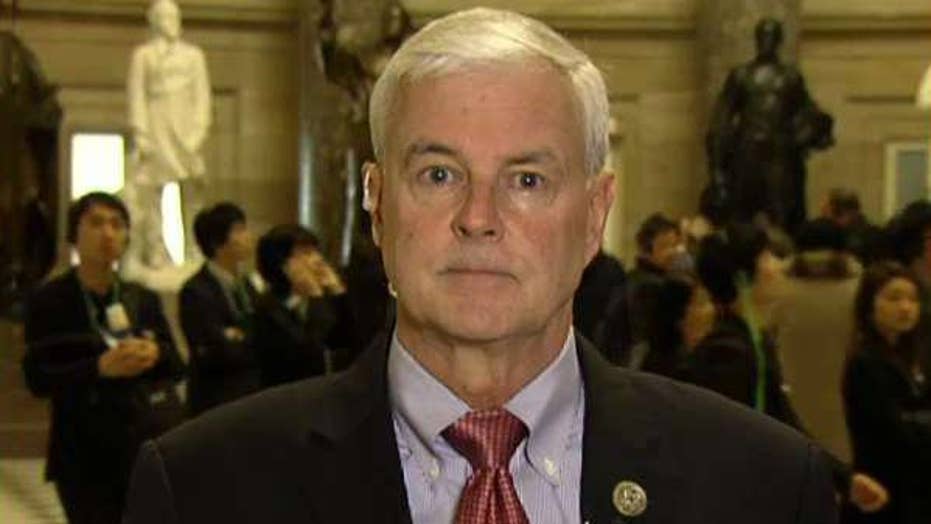 Republican congressman from Arkansas says the House Budget Committee's goal is to achieve balance within a 10 year window, believes the economic growth spurred by President Trump's budget proposal will be the elixir to fix problems associated with growing deficits and debt.

This is a rush transcript from "Your World," February 12, 2018. This copy may not be in its final form and may be updated.

NEIL CAVUTO, HOST: Again, we should let you know as well that -- and we're going to be monitoring what the budget director has to say to this, on the day the president has submitted a $4.5 trillion budget with no hope, even within the next 10 years, of ever bringing it into balance.

I wonder what Arkansas Republican Congressman Steve Womack thinks of that. He's chairman of the House Budget Committee.

Some of your conservative colleagues -- you might be among them, sir -- have said Republicans have given up the fight for spending and watching spending. What do you think of that?

REP. STEVE WOMACK, R—ARKANSAS: Not at all, Neil.

We -- look, the president's proposed budgets and the legislative branch, the check and balance, will eventually dispose. We're concerned about deficits and debt, probably more so than the markets seem to be reflecting right now.

But there's no doubt that the people that I represent on the House Budget Committee are anxious to tackle a budget resolution for this year, even though our counterparts in the Senate may not.

But we are. And it's always our goals to see that we can achieve balance within a 10-year window. And we will continue to proceed in that direction.

CAVUTO: Well, it wasn't the president's goal, sir, as you know.

CAVUTO: It didn't seem to be the goal in this two-year budget extension agreed on by Republicans and Democrats. I'm not faulting one party over the other, because spending increased, and nobody seemed to give a whit.

WOMACK: Well, no, we do care, but we also care about our economy. We care about creating jobs and opportunities. We care about economic growth in this country, which we think the growth model is part of the elixir that will fix a lot of the problems associated with deficits and debt.

There's some front-end spending that goes with that. But in the long haul, we expect that the policies advanced by this president and by the Congress will be such that we're going to make improvement in our economic situation, our fiscal glide path, as I often call it.

And I'm expecting that to happen.

CAVUTO: All right, now let's talk very quickly, if we can, sir.

And I know you're rushed, but we also have this separate infrastructure plan the president has outlined, roughly $1.5 trillion, with about $200 billion federal money up front.

And Chuck Schumer has already blasted that, saying that that won't do the trick. It will lead states and municipalities, cities to institute tolls, what he called even Trump tolls, to pay for a lot of this.

What did you make of that?

WOMACK: Well, I'm not going to get into what Senator Schumer says or doesn't say and the way he characterizes the infrastructure plan.

Look, we know we need an infrastructure plan. It is long overdue. We also know that we can't afford to just take a federal approach to everything that we do. So, I OK like the fact that the president is throwing a $200 billion carrot out there, is going to push a lot of these decisions down to the state and local levels, that he's going to put money in a lot of things that are going to help America, to include the rural programs, which I represent a large rural population as well.

So the fact that the president is willing to deal with this issue and fashion a proposal that I think a lot of Congress can wrap its head around, I think, is a good thing.

CAVUTO: Do you think there should be a hike in the federal gasoline tax? Some of your colleagues have hinted at that as long overdue, given it's been 25 years. Other are saying there's other ways to deal with this.

WOMACK: Well, personally, I -- I like the fact that we ask our users to pay for the infrastructure that we use and that we tear up and that we have to rebuild.

Now, the $64,000 question, Neil, is, how is it best for the user to be able to fund these programs? Is it a hike in the gas tax, where it's baked in at the pump, or is it some kind of miles-driven proposal, which I believe is too much Big Brother, or is it tolling?

It's probably a combination of a lot of things. But at the end of the day, we need infrastructure. We also need it to be fair, because there's a lot of electrification going on with cars that are doing damage to roads.

WOMACK: So, there is -- this is a -- a very big problem for us to have a conversation in Washington about.

CAVUTO: All right, Chairman, thank you very much for taking the time.

CAVUTO: We do appreciate it.

WOMACK: Thank you. Thank you, Neil.

Content and Programming Copyright 2018 Fox News Network, LLC. ALL RIGHTS RESERVED. Copyright 2018 ASC Services II Media, LLC. All materials herein are protected by United States copyright law and may not be reproduced, distributed, transmitted, displayed, published or broadcast without the prior written permission of ASC Services II Media, LLC. You may not alter or remove any trademark, copyright or other notice from copies of the content