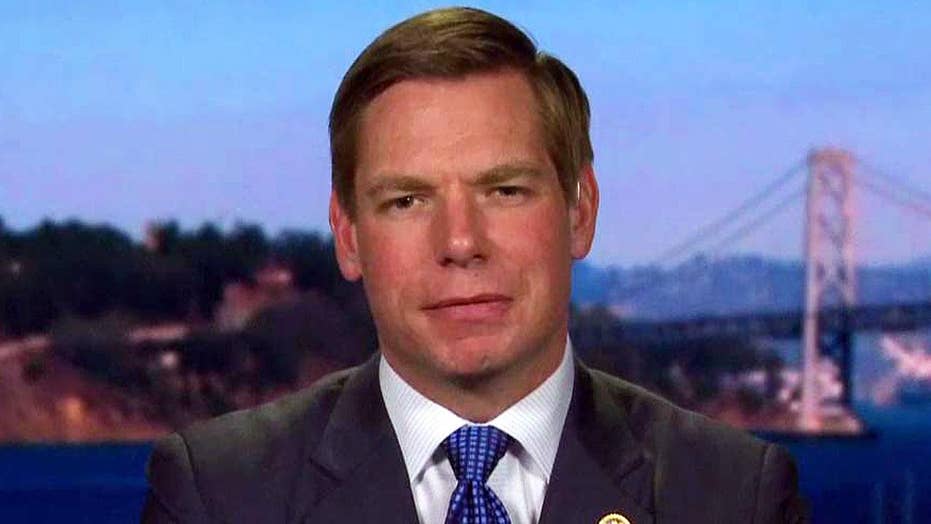 Rep. Swalwell says he is 'offended' by Comey's ouster

Democratic congressman speaks out on 'Your World'

This is a rush transcript from "Your World," May 10, 2017. This copy may not be in its final form and may be updated.

NEIL CAVUTO, HOST: All right, he's out of there. James Comey has been fired, as you know.

But a lot of Democrats, led by Senate Minority Leader Chuck Schumer, want to have hearings, closed-door hearings, with Attorney General Jeff Sessions as to why and how that all transpired.

To Democratic congressman of the beautiful state of California Eric Swalwell.

REP. ERIC SWALWELL, D-CALIFORNIA: Thanks for having me back, Neil.

CAVUTO: Are you for these hearings just to find out the -- what happened and why it happened?

I'm offended by what happened for the same reason that most Americans are. This is the United States of America. You don't get to fire the person who is investigating you. That violates the independence that law enforcement is supposed to have from our nation's leaders.

So, as a member of the Judiciary Committee, I hope that we could bring before us the attorney general and understand first, Neil, why was he involved at all in this decision? He was supposed to be recused with anything doing with Russia. And, also, who else was involved?

CAVUTO: All right, well, we do know that Rod Rosenstein, the deputy attorney general, was the one I guess, sir, who actually wrote the letter recommending this action.

They seem to cite just the flip-flopping and the mistakes and everything else that had to do with the Clinton e-mails. Now, even some Republicans, to your point, have raised eyebrows on that response.

But what do you hope to prove here, that apparently the president made reference in his letter firing Comey to the three occasions in which he was-- and I'm paraphrasing here -- exonerated the president.

Now, the question that I had there -- and maybe you have the same one -- how would he know that? Would Comey have relayed that to him, that these Russian ties are being investigated, but they don't go up to his level, to President Trump's level?

And Director Comey, whether he told him or not, will not reveal that. That's not something that he would able to tell the public at this point in time.

CAVUTO: Then what would make the president say that?

SWALWELL: You know, what would make the president say that President Obama was wiretapping him, Neil? I can't get into the mind of the president.

But what I would like to see, to your earlier question, is to make sure that the investigation that was on its way into criminal and counterintelligence matters as to whether anyone on the president's team was working with Russia during the interference campaign, I want to make sure that that is ongoing and that it's not disrupted by this firing.

CAVUTO: Well, it would be safe to say that it goes on, right?

Now, the question is, wouldn't it be very obvious and almost too obvious for the administration to do something that Nixonian, I guess, for want of a better term? That's the comparison people have made, when Richard Nixon fired Archibald Cox, the Watergate prosecutor. We simply got another prosecutor down the road who finished the job.

So is that a fear here that that just stops, that the requests that have gone out for information just stop? Because that would be highly unlikely, wouldn't it?

SWALWELL: I believe that the men and the women who serve at the FBI and at the Department of Justice will follow the evidence.

And I'm just afraid that the person at the top of the FBI, there may be a chilling effect, knowing that the last person who was conducting this investigation and leading it just got fired, that Sally Yates...

CAVUTO: But the last guy who was leading it, right, Congressman, did a pretty shabby job, I think, by your estimation, other Democrats' estimation, when it came to handling Hillary Clinton. Maybe there's a better person to do that with President Trump.

SWALWELL: You know, I never called for Director Comey to go back in the November election season, but...

SWALWELL: And however people felt about that -- and they could have been right that he handled that wrong -- but once he told Congress back in March that the president's campaign was under criminal and counterintelligence investigations, unless Director Comey broke the law, I don't think he should have been pulled off this investigation.

And that is what has happened. And I think that is why people are so concerned.

CAVUTO: Well, then you stand out, sir. And I commend for you that. But many in your party, including Chuck Schumer and others, Hillary Clinton just last week saying, if not for him, she would be president now. Now, maybe that's the case. Maybe you agree or disagree.

But there was this pile-on that this guy was just horrific. And now, all of a sudden, he's practically Jesus Christ. I don't understand that part, you know?

SWALWELL: Well, what offends people, Neil, though, is that he was leading the investigation.

So, whether you thought he was right or wrong when it happened, the president came in on January 20 and did not fire him. He was only fired after he told Congress and the American people that he was investigating the president's campaign.

CAVUTO: But wasn't a lot of it having to do with exaggerating the number of e-mails that had made their way to Anthony Weiner's server, you know the whole drill, and that started raising credibility issues and that he could be sloppy?

I'm just here passing that along, that if he's that sloppy, or in that regard, that maybe they felt maybe, look, you're just not up to snuff here. Even fellow FBI agents were preparing a report, we're told, Congressman, to correct the record on that. That's a rarity.

SWALWELL: And to suggest that the reason was how he handled the Hillary Clinton investigation, which Donald Trump applauded and said he showed guts, it just -- it doesn't add up.

CAVUTO: Do you think that what Donald Trump did was Nixonian?

SWALWELL: Neil, I think what we need to do is conduct our investigation in the House, not to be influenced by politics, to let the FBI have all the resources they need to chase...

CAVUTO: You got an investigation in the House. You got one in the Senate. You got some of your leaders, sir, talking about getting a special prosecutor going, others a commission. That's a lot of stuff going on.

SWALWELL: Yes, I think the House and Senate should have done a joint investigation, as happened after September 11, to avoid redundancies.

But an independent commission, I think, would be the best way to depoliticize this, declassify and debunk a lot of the myths that are out there.