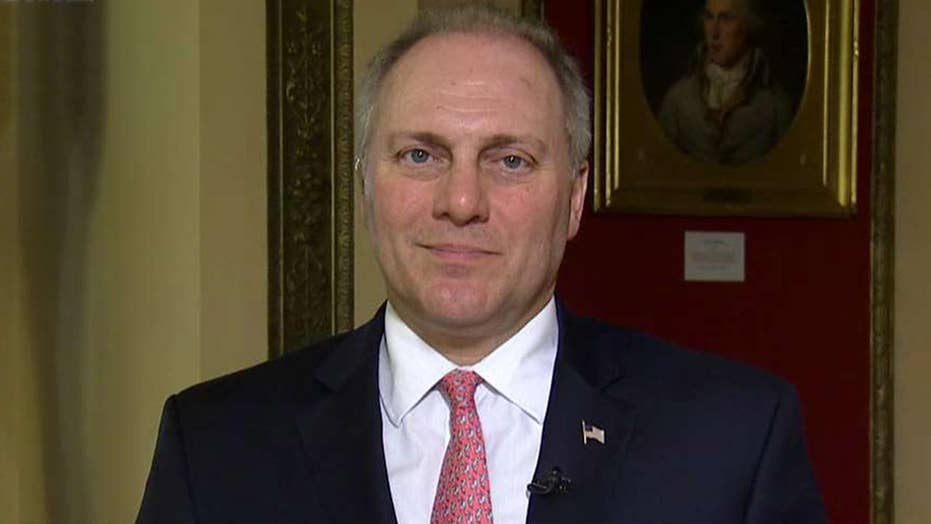 Rep. Steve Scalise: I am open to a special prosecutor

This is a rush transcript from "Your World," May 23, 2018. This copy may not be in its final form and may be updated.

DONALD TRUMP, PRESIDENT OF THE UNITED STATES: I want them all to get together, and I want them, because everybody wants this solved. But a lot of bad things have happened. We now call it spygate. You're calling it spygate.

A lot of bad things have happened. I want them all to get together. They will sit in a room. Hopefully, they will be able to work it out among themselves.

So, since he has done that, others have sort of taken up the baton just to sort of simplify this story. What it is about is these revelations now that the FBI, Justice Department had spies, you know, people seeking information from an in embedded in the Trump campaign back in 2016.

Let's get read on all of this and so much more, including tax cuts and all of that, with House Majority Whip Steve Scalise.

Congressman, always good to have you. Thank you for coming.

REP. STEVE SCALISE, R-LA, HOUSE MAJORITY WHIP: Always great to be back with you.

CAVUTO: What do you make of this? The president says, we got to got to the bottom of this. Some are calling for a special prosecutor to look into this. What is your view on it?

SCALISE: Look, I have had a lot of concerns for a while about some of the things that have been going on at the FBI.

And I have been vocal about it, saying the FBI needs to get their house in order and not focus on witch-hunts, but actually keep true to their core mission of keeping America safe. And we have raised a lot of questions through our oversight hearings, Devin Nunes and his committee, some of the things Trey Gowdy has been looking into to, where we're trying to get more facts from Justice, from FBI, and frankly not getting all the information that we need.

And we're going to keep pressing to get that -- those answers.

CAVUTO: It sounds like you wouldn't be keen on a separate prosecutor. But would that mean an inspector general, again, making this an added thing to look into, or Hollywood?

SCALISE: Well, look, I'm open to a special prosecutor to look into some of these other allegations that I don't think are being adequately addressed.

SCALISE: One way or another, however we can quickly get them addressed.

If the FBI and Justice just turn over the documents that have been requested without redacting almost full pages in a ridiculous way, then I think we would make a lot of headway and answer a lot of questions. They should be as interested as we are in rooting out any bad actors over at FBI.

If they're bad actors, they should want them out, just like we would.

CAVUTO: All right, do you find it odd, sir, though that they're -- if this indeed was going on and they had operatives kind of spying or looking around the Trump campaign, and they never bounced it off the Trump campaign to give them the heads-up that's what they were doing, what do you think of that?

SCALISE: Well, I think it all sounds very odd.

Don't redact all these documents that we're asking for. There's an Article 1 and Article 2 of the Constitution authority. We have an oversight responsibility for the American people.

CAVUTO: Could I ask you something a little bit about the speaker's position? He's going to retire after his term ends. But some of your colleagues want him out now.

And I'm just wondering what do you think of that.

SCALISE: I haven't heard that hue and cry.

What I know we're focused on is pursuing our agenda, continuing to move the economy forward. We're seeing great economic numbers. But there's a lot more we can do. We have even talked about some things like a tax reform 2.0, working with President Trump to build on the success we already had.

Let's stay focused on doing our job. The midterm elections are coming. And we're going to deal with that too. We're going to make sure that Nancy Pelosi is not speaker.

CAVUTO: So you're not for switching speakers out or choosing on a leader of your party in the House until after the election?

I'm focused on moving our agenda forward. Paul Ryan is as well. So is Kevin McCarthy. Our team has got a lot of work to do. And we're working with the president, in Donald Trump, who wants to get really good things done and is already seeing a lot of good things done on taxes, on regulatory reform.

Let's keep adding more jobs. Let's keep building our economy. And then we will let the November elections deal with themselves.

CAVUTO: All right, so, Congressman, if some of your colleagues -- now, actually, there are a good many of them at last count -- come up to you and say, Steve, you know, we need you right now, and we respect Paul Ryan, but January is a long time, we could get some things done right now with a new energized, galvanized group led by you, you would say?

SCALISE: That's not what people are talking about right now.

They're saying, let's get a farm bill done that puts work requirements in place so that somebody that is on welfare today, when people are looking for jobs, can actually get into the work force. That's what we're going to be doing in these next few weeks. Let's actually make tax cuts permanent that are working really well for families, but will expire in the next eight years.

Let's get them permanent. Let's have that vote soon in these next few months. Those are the kinds of things we're dealing with.

The individual tax cuts, you're talking about, make them permanent, and those then expire in '25.

CAVUTO: All right, as you know, a number of Democrats, led by Nancy Pelosi, but there are a host of others, say they want to scrap the plan that you guys came up, that it's not fair, not right, not balanced.

SCALISE: I say, they have no idea what is going on out there is how excited middle-class and hardworking families are to see more money in their pockets, to see companies hiring and companies giving more bonuses and pay raises to their workers.

When Nancy Pelosi says she wants to raise taxes in the face of lower taxes getting our economy going again, it shows the contrast and what is at stake in this November's election.

CAVUTO: I would like to hear your thoughts on the president, besides just worrying about ironing out the differences that apparently have cropped up between himself and the North Koreans ahead of that big meeting, talk about getting a trade deal with the Chinese, which would include potentially some rescue of ZTE, the Chinese telecommunications concern, of course, that's been found guilty of espionage.

It's been sanctioned. It's been punished. A lot of your Republican colleagues in both the House and the Senate think it's very dangerous what the president is doing. What do you think?

SCALISE: Well, I think the fact that the president is engaging other countries is important for America.

Look at what he's doing with Mexico and Canada in renegotiating NAFTA. There are a lot of important issues on the table that can benefit America's economy. I encourage him to continue doing that and going and getting a better deal for America.

If he can engage the Chinese and get them to stop their bad practices that they're engaging in, that's a good thing. Obviously, there's some areas that we want to see addressed. And the president wants to see a lot of those things addressed, too.

This president has been standing up for America, rebuilding our military. Look at what he's done just recently in pushing to give the largest pay raise to our troops in years.

CAVUTO: But he's still talking to ZTE or this is an issue of helping ZTE.

Now, the president says nothing has been decided on that.

CAVUTO: But a lot of your colleagues are worried enough, sir, to say, don't even think about it, and this -- this could require our intervening to stop you from doing it.

SCALISE: Well, the first thing to do is to engage with the administration.

President Trump has shown a real willingness to work with Congress to iron these problems out. And that's the way to handle it. Talk to him, just like on trade. Everybody was saying there was going to be a big trade war. And there's not, because President Trump worked with us, worked with other people to make sure we keep seeing this economic growth while tracking down on cheaters like China in some of the areas where they have been hurting our economy.

So, I think he's been proven that he's got a great track record in negotiating and working with us to make sure that we're addressing problems and getting our economy growing.

And there's a lot more growth we can have. Why stop now?

SCALISE: Always great to be with you, Neil.