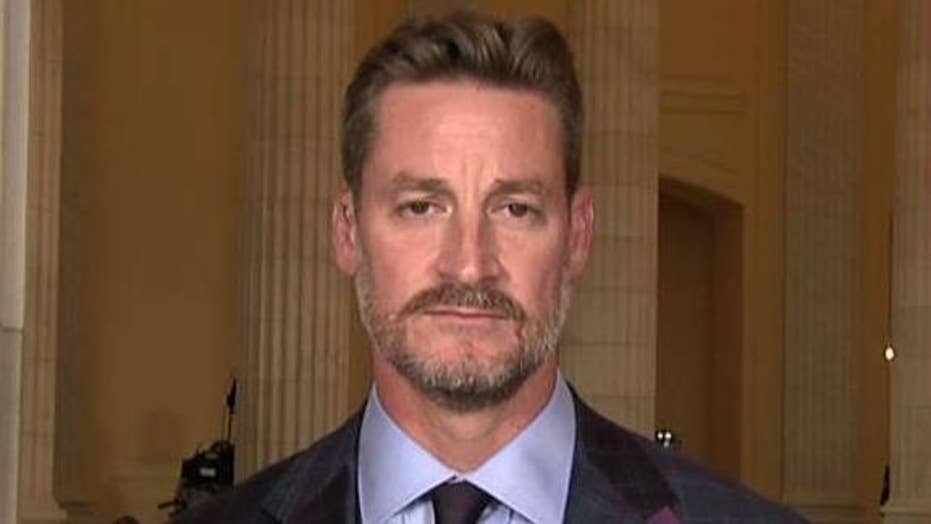 Rep. Steube: Republicans were refused the ability to call witnesses in the House

Florida Congressman Greg Steube, Republican member of the House Judiciary Committee, weighs in on the debate over new witnesses in Senate impeachment trial.

This is a rush transcript from "Your World with Neil Cavuto," January 15, 2020. This copy may not be in its final form and may be updated.

NEIL CAVUTO, FOX NEWS ANCHOR: Joining us, Rick Scott, right now, the Florida senator. Senator, this was a big deal, a surreal day, though, on the very same day the impeachment battle moves to the United States Senate. What did you make of it?

SEN. RICK SCOTT (R-FL): Well, first off, I want to thank President Trump and I want to thank Bob Lighthizer. I mean, they’re doing their -- they’re trying. They’re trying to figure out, how do we bring China into being part of the world economy in a fair way. They’ve never done it. I’m glad they have this agreement. I hope China complies, we’d love to see more trade, but they have never complied. I hope they buy the agricultural products. It’ll help states like Iowa. But think about it. They have never opened up their markets. They promised to do that. They steal our technology. They have never stopped. They keep selling fentanyl into our country. Unbelievable human rights violations. They’re trying to take basic rights of Hong Kong citizens. So, I think it’s bigger than trade. I just don’t see how China’s ever going to -- they’re not changing. It’s communist China. Xi is the general secretary of the Communist Party. What -- he didn’t change his stripes all of a sudden. So, I’m -- I appreciate what the president’s doing. I just don’t believe they’re going to comply.

CAVUTO: Was that why you weren’t there today, Senator?

SCOTT: Well, I -- I have been very clear. This is bigger than trade. It’s about -- it’s about human rights. It’s about -- Neil, think about this. How many times would you do a deal with somebody that, time in and time -- time and time again, they don’t do what they said they’re going to do? So, I’m glad -- I’m glad the president is trying. I know they worked hard on this. I wish China would do it. I just don’t believe they will.

CAVUTO: All right. So, when you got all this commitment that they’re going to buy $200 billion worth of goods from the United States over the next two years, and a lot of that’s going to be farm stuff, agriculture stuff, manufacturing stuff, car- related parts stuff, even Boeing planes and all that, you just don’t buy it?

SCOTT: No. I mean, it sounds good. But they’ve never -- they’ve never done it. What -- so, if you think about it, what changed? What has -- why have -- are they - - is there something that’s changed in communist China? No, nothing’s changed. So they’re going to do the same thing. They’re going to make a commitment. We will have a nice signing day. We all tried hard. I know the Americans, Trump and Lighthizer, have tried their best. The Chinese won’t.

CAVUTO: So, when the Chinese are held to these metrics or measurements, whatever they’re calling it, Senator, where we’re the ones policing them, it won’t be an outside body, like the World Trade Organization, and businessmen say, hey, they’re not doing what they said they did, and we can re-slap tariffs on them, you don’t think that’s sufficient enough punishment?

SCOTT: So, you look at the history, we haven’t stood up to China. I know President Trump has tried harder than any other president has. So, we’ve got to -- we’ve got to do it, because they’re not -- they’re not going to comply. And, by the way, I think we ought to stop and say, let’s take care of Americans. Let’s buy American products, like -- let’s help American companies. We know that China is not a fair player. I think it’s -- I think it’s fair what Chuck Schumer says, that they’re still subsidizing companies. You saw the article about Huawei. They subsidize it supposedly to the tune of, what, $75 billion. So let’s -- I mean, let’s -- let’s be realistic here. I want more trade. We all want more trade. The president is trying. But let’s look at history. We -- you can’t be -- I don’t believe you should be optimistic today.

CAVUTO: All right. Let’s look at the history of this impeachment issue coming to the United States Senate, only the third time that we’ve seen that. And I’m wondering your thoughts about some of your colleagues who are open to witnesses or witness testimony, and the fact that that could maybe go on much longer than the president or maybe yourself thought. What do you think?

SCOTT: Well, first off, this place -- I have been up here a year. This place is dysfunctional. Nancy Pelosi has made this just a joke. I mean, why did she hold the thing for -- it was so urgent. Why did she hold it for four weeks? It’s all -- everything up here about this impeachment is all about -- it’s all about politics. So I want to get this behind us. I want to get back to just trying to do something good for the country. Think about this. We have put -- while they wasted all that time on impeachment, did we balance the budget? Did we take the time to pass a budget on time? Did we have time to review the budget? No. I mean, we had, what, two days to review the budget deal done in December, two months late? I mean, let’s go do some things that we were elected to do, reduce drug prices, secure the border, balance the budget, make this a -- really focus on how do we win long term.

CAVUTO: All right, but to some of your colleagues advocating, we’re open to witnesses, are you?

SCOTT: Well, I don’t know why. I don’t know why. The Democrats have proven that Trump didn’t do anything wrong. He’s been very transparent in this. He put out the transcript. So I’m going to listen to both sides.

CAVUTO: But you seem to think that would be a waste of time.

SCOTT: Yes. I mean -- I mean, it’s -- look, the Democrats in the House had the opportunity to prove their case. We know they didn’t. So now, what are they trying to do, is to see -- to see if the Senate will prove their case, because they have no case. It was all hearsay over there. There was no -- there’s no case they have. So it’s just hearsay. So now they want us to do their job. That’s not my job. My job is I will listen to both sides. I will ask the questions I want to ask. And I think we ought to go home.

CAVUTO: All right, we will watch it very, very closely. Senator, thank you very much. Good seeing you again.

SCOTT: Thanks, Neil. Nice seeing you.