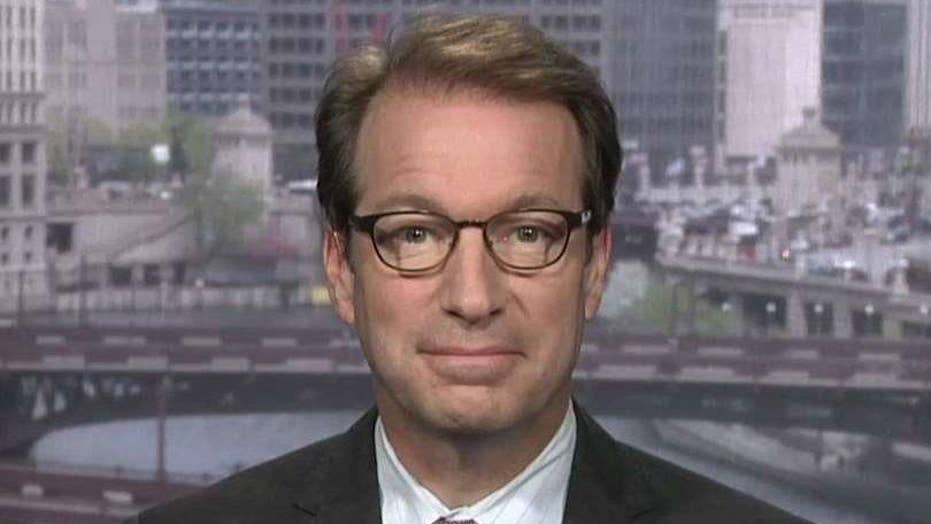 On 'Your World,' House Ways and Means Committee member says the proposal date is a 'good move forward'

This is a rush transcript from "Your World," April 21, 2017. This copy may not be in its final form and may be updated.

NEIL CAVUTO, HOST: So, the news here, folks, is that the president is going to full steam ahead next Wednesday, where he will outline their plan, that is, the White House blueprint, for a big old tax cut, he says bigger than anything we have seen.

That would mean being than anything we have gotten in the past the last go- round with, of course, the Ronald Reagan tax cuts a generation ago.

Illinois Republican Congressman Peter Roskam Peter joining us. He's a crucial member of that very crucial committee, House Ways and Means, where they have been working on this for some time now, anyway.

Very good to have you, Congressman.

It sounds that the president wants to go through with an offer, plan of his own next Wednesday. Is that being coordinated with you guys?

REP. PETER ROSKAM, R-ILLINOIS: Well, this is welcome news. We have been waiting for a long time for the White House, Neil.

As you know, the White House has a blueprint. It's a plan that we embrace and we enjoy and we think is a good proposal.

CAVUTO: Is it your plan? Is it roughly the same, seven rates to three, a cut in the corporate tax, et cetera?

ROSKAM: I think there's going to be elements of this.

But, look, your guess is as good as mine, which is why this is news. When the president is coming out now and saying that they are going to have a dramatic tax cut, I think that is music to people's ears.

You are going to all the rates, bring them down to three. You're going to take the top rate, bring it down to 33 percent, the corporate rate presumably down to 20 percent, maybe lower.

CAVUTO: Are you all roughly in agreement on those broad parameters that you know of?

ROSKAM: I haven't seen the president's plan. So, I can't speak to that directly.

ROSKAM: We also want to get small business, that is pass-throughs, their business income down to 25 percent.

ROSKAM: But, look, I think that in the great scheme of things, this is a good move forward. We have now got the White House that is taking the initiative, communicating in some ways a date certain here. And now we can get about this great debate.

We know what we think or we have got a plan in the House. We need to hear from the White House. The Senate has got to engage at some point on this.

But here's what we know. We can't stay here. And the notion of taking advantage of what is really a national inflection point on taxes I think is where the action is. So, let's move. Let's start.

CAVUTO: All right, but are you in support of moving even if you don't get a health care rework done?

ROSKAM: Look, I would divorce the two.

ROSKAM: And I wouldn't let health care hold up the progress on tax reform.

CAVUTO: Do you know if the chairman, Kevin Brady, feels the same way, Congressman, that, look, if you're going nowhere on the health care front, even though it's a little looking more promising than last go-round, we go full steam ahead on this?

ROSKAM: Oh, I don't want to speak for the chairman, because I haven't spoken to him directly about the timing.

ROSKAM: But I do know this. He's interested in moving forward on tax reform. And I think an overwhelming majority of folks are.

Look, this is where there is a national consensus in this sense. Nobody is defending the status quo of the tax code. Nobody likes it. So, since that is true, let's take advantage of that and let's drive the growth agenda.

And so I think it's good news that the House -- or that the White House is coming out and saying, we have looked at all these things and we're going to be articulating our plan. Great. And let's engage with the House.

So, let me ask you this, then, Congressman, is with these supply-siders, the Art Laffers and the others, very big proponents of big tax cuts, because they say that is the only kind of stimulus game in town, they have also said don't get so worked up about whether they're revenue-neutral in the beginning, in other words, that they're paid for in the beginning, because they will pay for themselves later on.

Do you subscribe to that view yourself? Do you believe that?

Number one, do they pay for themselves in the long run? And I'm talking to you from the state of Illinois, which is no stranger to you in terms of fiscal disaster and avoidance behavior as it relates to debt.

ROSKAM: So, set that question aside for a second.

The other question is, do we want permanent tax policy, or do we just want a tax policy that is going to expire in 10 years? And if we're trying to influence business behavior, which we are, if we want to have a manufacturing renaissance, which we do, if we another to people to re-shore their corporate interests here in the United States, do we really think they are going to do that on a tax code that expires in 10 years?

CAVUTO: But you would have to give on something. Right? You would have to do something, either scale back some tax breaks that are popular today like for state and local taxes. Would you be open to that?

CAVUTO: Such as? Such as?

ROSKAM: Such as state and local, for example.

CAVUTO: Such as charitable deductions?

ROSKAM: No, not charitable. That's too sacred.

So, there are some, but not others. And I take your point. You have got to dial these things up or dial them back. But here's what I think we should be doing as a threshold issue, Neil.

We ought not be walking away from pushing for a permanent tax code. We have got -- American fiscal and tax policy is inverted right now. We have temporary tax policy, and we have permanent spending policy. We should flip that.

CAVUTO: So, just where I want to be clear, sir, the president sounds like he wants to do this rate thing next week, sounds like he's still keen on reducing corporate taxes, overhauling them, sounds like that would be concurrent, in other words, done at the same time.

Are you of that opinion as well, that they should be done at the same time, that you shouldn't do the corporate thing first and then address the individual rate stuff, or what?

ROSKAM: I think you have got to do it all at the same time.

ROSKAM: And here's why.

The vast majority of my constituency, it's a pass-through constituency. I have got a lot of LLCs and a lot of S-corps. And the notion of me going back to that constituency and say, hey, listen, we took care of the corporate guys, and we're going to get you on the next helicopter out of here, it's completely unacceptable.

CAVUTO: We should explain that a lot of those individuals of whom you're speaking pay at the individual rate.

CAVUTO: And so their rates -- if corporate rates are cut, that has nothing to do for them.

Congressman, thank you very much. Hope you have a nice weekend.