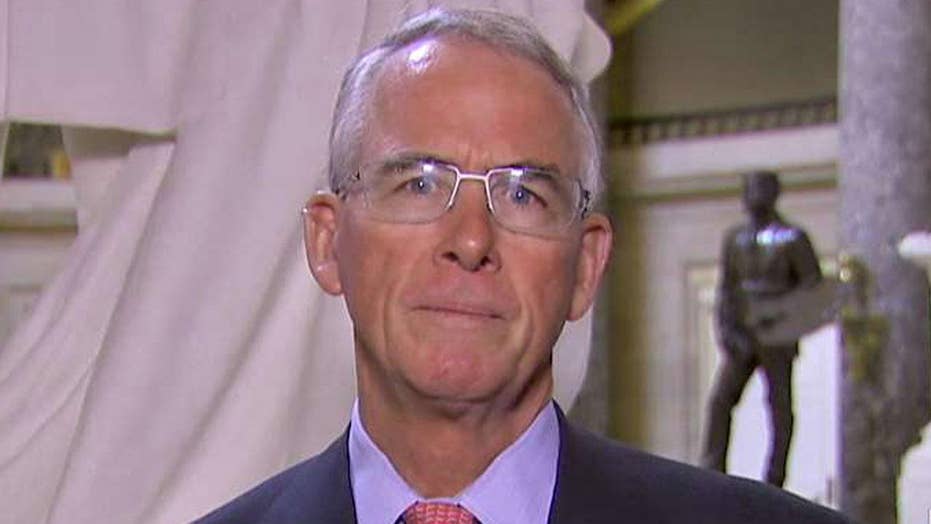 Rep. Rooney on the Republican timeline for tax reform

Congressman speaks out on 'Your World'

This is a rush transcript from "Your World," June 7, 2017. This copy may not be in its final form and may be updated.

REP. FRANCIS ROONEY, R-FLORIDA: Neil, thanks for having me on.

CAVUTO: I wonder whether, because I hadn't seen any prominent tweets today, whether the president is dialing back on them, and that just letting the record and the focus, for example, today on infrastructure, presumably tomorrow, talking about tax cuts and health care reform, whether that is going to be his focus, eschewing all this other stuff?

Trump tweeting is way above my pay grade. But what I can tell is that those agenda items are on the agenda. We need to have the Senate pass the-- some version of the Obama repeal and replacement. We need to get after tax reform and, therefore, get our country moving again.

We have already rolled back a lot of regulations that have hurt business.

CAVUTO: Now, do you know, when the president was outlining this infrastructure plan in Ohio today, are you -- first of all, are you on board with that? It's going to be a lot of money, a trillion dollars over 10 years. He says only $200 million -- I say only -- in government money, the rest sort of leveraged off of that through private initiatives.

Is that doable? Are you -- forget about getting Congress on board. Can Republicans as a group get on board with that?

In our construction business, we have done many of those ourselves. And it's a way to combine the best of the government and the best of private capital. So, I hope we can accomplish it. We have so many needs in our country.

The way it works is, you will have the public either a lease for the use of the facility, maybe a down payment, and establish the creditworthiness of it. And then you will have a private business put up the capital and borrow the money to build a project and bring it online.

CAVUTO: Congressman, how did the dinner go? One of the things -- and I got a lot of heat for this -- is, I recommended -- I have no problem with the president tweeting.

I think it goes off-topic, and dangerously so, and hurts his general message, when, over last weekend, for example, he criticizes the London mayor in the middle of a shooting spree there, and that the tweets are fine if they have to do with what is working for him and dangerous when it does not, for example, the whole Russia thing.

What are your thoughts on that? Did it come up, that issue of focusing on those tweets?

ROONEY: I don't recall that coming up.

What I recall -- most of the dinner, I recall most poignantly, was a robust discussion of the difficult foreign policy situations that the United States is facing around the world and how the president is totally focused, with General McMaster, on reorienting our foreign policy towards a peace through strength, after eight years of a fairly moribund and confusing foreign policy.

CAVUTO: Did the Comey issue come up as well, Congressman? Even when the president argues there's no there there and his people have been saying that, for example, Comey's latest written testimony that they will pounce on tomorrow that the president was not being targeted in an investigation?

Did that come up, if for no other reason that it does distract from some of the things he says he wants to do?

But what I do recall specifically is a discussion about all of the Democrat whirlwind noise that is out there in the liberal media trying to distract us from keeping our eye on the ball and doing the things that the people elected him and most of us to try to accomplish.

CAVUTO: Do you have concerns that this could -- the timetable for this could be delayed?

ROONEY: I think the president is pretty firm and resolute that he is going to do the things he told the people he would do.

CAVUTO: Yes, but it's up to you guys, right? He proposes, you guys dispose, right?

ROONEY: Yes. We had a meeting today with the speaker and the leadership focusing on how we move on to tax reform, get the budget first in place so it can be done by reconciliation. And I think that is critical.

Ronald Reagan cut taxes, cut regulations, and stimulated an economy that grew at almost 6 percent for a few years.

CAVUTO: Yes, it's possible. The numbers are there, potentially.

ROONEY: Thank you for having me on, Neil.