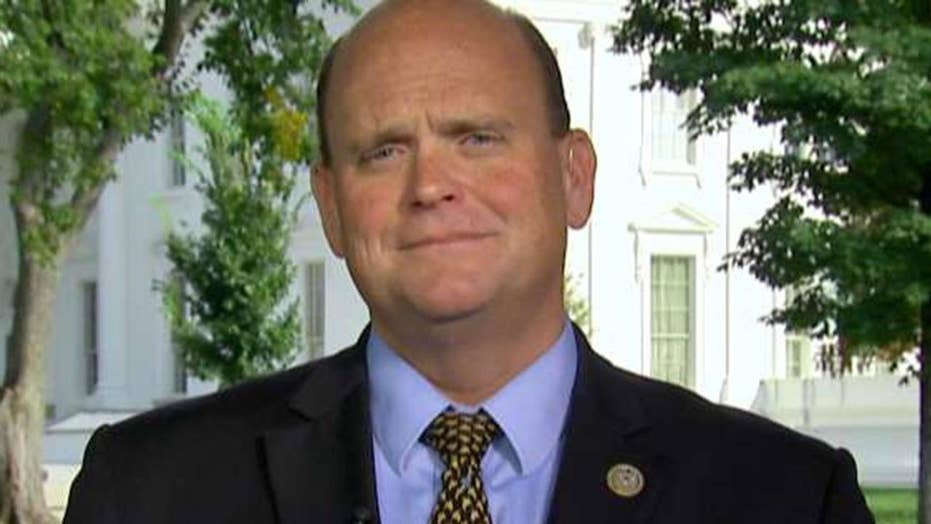 On 'Your World,' New York congressman says the president wants to get something done for Americans

This is a rush transcript from "Your World," September 13, 2017. This copy may not be in its final form and may be updated.

NEIL CAVUTO, "YOUR WORLD" HOST: A fellow who was in on that meeting today -- remember, there were 13 congressmen who were gathering with the president of the United States today. Eight of them were Democrat, by the way, this one Republican as well, Tom Reed from the state of New York.

He joins us outside right now the White House.

Congressman, were you surprised by the president making it clear, even though it had been well-telegraphed, I think, the rich are not going to be participating in this bounty?

REP. TOM REED, R-NEW YORK: Well, I tell you, I appreciate the president reaching out and wanting to get something done.

And by making that commitment, I think that opens up a possibility for broad bipartisan support, even 60 votes in the Senate. It's time to get it done for the American people.

CAVUTO: Did he tell you that? What was the reception of those remarks among just your Republican colleagues?

REED: You know, obviously, we're going to continue to work the deal as we go back to the Hill.

But I think the president is sending a clear signal. He wants to get something done for the American people. And fixing American broken tax code is mission number one right now, Neil.

Congressman, your colleagues in the House, many in the Freedom Caucus who were working on an across-the-board plan that included the wealthy, how do you think they are going to feel about this?

We know Kevin Brady, the House Ways and Means chief, was coming up with a plan that would have across-the-board tax cuts, very Reaganesque, very similar to what he concocted 30-plus years ago.

REED: Well, Neil, obviously, I support cutting the taxes across the board. But if it means we have to negotiate to get to a deal, I think what you saw today was a president who is leading for the American people.

And that's what it's about, getting the deal done for the people we represent back home. Not worrying about the extremes on either side of the party.

CAVUTO: What is interesting, too, Congressman, to your point, is, this does ensure that you are going to get more bipartisan support and maybe in the Senate easily 60 votes, I would think. What do you think?

And the more votes we can get together, the stronger we are, because the legislation that lasts has broad support of the country. Building it from the middle out to me has always been the wise course to take. And today I think you see a commitment.

The president wants to get it done for the American people. And that's what we came to Washington to do. I'm excited. I'm optimistic. I think tax reform took a great step forward today.

CAVUTO: Was anything discussed, sir, or can you share with us about writing off your state income taxes, and expensive states like yours, in New York, of course, that is a very big issue, I'm sure a concern of yours. Is that deduction protected or on the chopping block?

REED: I appreciate that, Neil.

REED: But what that will be, that's part of the process of building this sausage that we're going to have to build for the legislation that the tax reform is going to be.

But, at the end of the day, I'm confident we can bridge those differences, we can accomplish the goal of that state and local tax deduction that are in the tax code today, and we can get it done and do it on a permanent basis for all of America, so they reap the rewards thereof.

CAVUTO: I just want to be clear, sir, because when I talk to many in your party on both the Senate and the House side, they had taken it as a given that the president was on board for tax cuts with everyone like the Reagan tax cuts, like the Bush era tax cuts, even going back to the JFK tax cuts that were enacted after he sadly was assassinated.

But that everyone got the rates. No one was left out. This bipartisan agreement, assuming it's going that rate, and I see no reason to argue your point, this will be done with a very significant group left out. And you're comfortable with that?

REED: Well, because we're also going to bring simplicity in the code.

REED: And that goal, in and of itself, will be very helpful to the folks that may not receive that tax cut that we're trying to still advocate for, but moving in the direction to build that coalition of the governing.

REED: And at the end of the day, that is going to benefit a tremendous of people across the nation also.

Congressman, with your Democratic counterparts who were there, the eight of them, including one, by the way, who is considering challenging Senator Flake in Arizona, were they receptive to what they were hearing from the president?

REED: I think there was a refreshing change of the atmosphere.

REED: As we left that meeting, as we walked in that meeting, we came here to get things done as members of Congress. And the American people expect us to do that.

This gives us the opportunity to do it.

CAVUTO: All right, thank you very much, Congressman. We appreciate it.

I know you have had a crazy day. Congressman Tom Reed, beautiful state of New York.