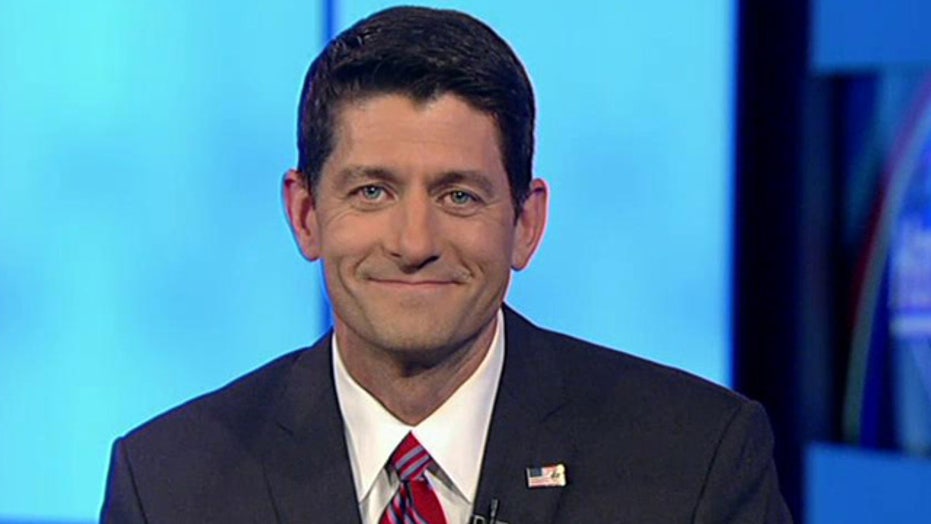 Rep. Paul Ryan on his vision for America's future

This is a rush transcript from "Hannity," August 28, 2014. This copy may not be in its final form and may be updated.

SEAN HANNITY, HOST: And joining us now Congressman Paul Ryan, "The Way Forward, Renewing the American Idea." How are you?

HANNITY: One of the things that frustrates me, and I'm going to start on a negative side, and not to put you on the spot, but because I'm frustrated a little bit with the Republican Party. We're less than 100 days out of an election, and I don't see any defining issues for the party.  The contract with America worked. Why are Republicans saying, all right, we're going to balance the budget this way, we're going to control the borders this way, we're going to offer this consensus alternative to health care, renewable resources, energy production like north Dakota. Why aren't we all on the same page? We aren't people all on the same page.

RYAN: You're basically describing why I wrote this book.

RYAN: Because I, like you, and I would argue a majority of Americans, don't like the track our country is on. Therefore as an elected leader, I shouldn't just complain and criticize. I do plenty of that. I owe people an alternative. What would we do differently? What would the country look like under these full spectrum conservative reforms that we're proposed in this book? That's precisely what this book is about.

So not only do I offer a critique of liberal progressivism and the Obama administration, also of our own party, but I also say here are the principles that built this country in the first place. And here is how you renew the American idea. And here's a specific policy agenda right here in black and white, an agenda that we take to the country that says here's how we revitalize America.

Hardworking taxpayers aren't getting the government they deserve. The economy isn't anywhere near its potential to providing opportunities people need to have a healthy, growing economy. And we are losing our standing in the world, which makes us less safe and less prosperous ultimately. And you have to give people a choice. So what I say is, and I learned this from the 2012 election. I learned this from my life. You need to give people a clear choice so that at least the people in this country get to choose what kind of a country they want. And our party has to do this or otherwise it's not going to happen.

HANNITY: I agree with you. Did you ever imagine, by the time President Obama leaves office he will have accumulated more debt than every other president before him combined?

HANNITY: We now have almost doubled the number of people on welfare, on food stamps.

RYAN: Labor force participation is about --

HANNITY: So how do we fix it? What do you tell people on the campaign trail? What do Republicans say how are we going to fix that?

RYAN: First of all, we have to say how we are going to fix it. I hate to keep saying the book --

HANNITY: That's why you're here.

RYAN: That's why I'm here. Number one, I put out a very specific poverty plan, which doesn't say here's all the answers. But here is how I as a conservative would attack the war on poverty, just like we did in 1996, with real welfare reform that moved people from welfare to work.  They reformed one program. There are dozens of other federal programs that haven't been reformed that are displacing and ignoring local control, welfare to work, they're actually making it, the current system makes it harder for a person to go to work in many way. You need to reform that.

HANNITY: You too have a chapter beyond makers and takers. You want to sort of advance a narrative because you think it gives a false perception of conservatism that seems harsh and uncaring.

RYAN: Yes. And I think that construct is disparaging in many ways because there are a lot of people who paid into programs that are earning those things that they get back, like Medicare or Social Security or a veteran who gets the health care that they were promised and deserved.  Those people aren't takers. Those people are people who earned these things and paid for them, which, by the way, in many cases are going bankrupt, which are being taken over by the government with respect to health care.

And so what I argue here is we owe it to the country, if we don't like the direction we're going, to offer a full set of ideas and solutions for how we get out of the ditch we are in and what America can look like in the 21 century. I really believe, Sean, the next half a dozen years are going to determine the trajectory of this country for at least a generation, and I don't like the panel we're on right now.

HANNITY: I don't like the path we're on either. I have Hannity, what I call top five. It's not as comprehensive as yours. I like the penny plan because you can explain it. Cut one penny out of every dollar every year for six years, you balance the budget in six years. You take a little issue with the math. And you include with that a balanced budget amendment.

I want energy production. The unemployment in North Dakota is zero.  Trainees at WalMart get $20 an hour. It's not bad pay for starting out and you need a job. I want a consensus alternative to health care. I certainly want to do something with America's schools and I want to secure the border. Five simple things that people can say this has been where we are today that would give them hope for the future, a vision, because there's no vision inside the people.

But more importantly I think you have to step back and decide what principles are you using to guide you as a policy maker? And the argument I make is that principles that built this country, the American idea, liberty, freedom, freedom for self-determination, basically the rule of law in self-government, which is the heart of the American idea, where the condition of your birth in this country doesn't determine the outcome of your life. You can make it in this country if you put a little work into it, that's slipping from us.

A lot of people don't believe it's there for them, and my argument is if we reapply these founding principles to the problems of the day, we can showcase solutions that can actually reach everybody in America. As conservatives, we should show everybody what I call full spectrum conservatism. That means go and compete for everybody's vote wherever they are, whoever they are, and have a 1980s kind of election just like Ronald Reagan did after the malaise days of Jimmy Carter. Our country is due for that kind of shake up and reform so that we can get out of the malaise we are in right now, shake this bad economy.

And in order to do that I think you have to intellectually defeat the liberal progressive agenda that is occurring right now, and offer a better agenda with better, sounder principles, better ideas that can actually occur, and show that they can make a positive difference in peoples' lives and get America back toward that land of opportunity, that land of freedom and prosperity.

HANNITY: Congressman, great to see you. Welcome to New York.

HANNITY: Are you running for president?

HANNITY: Thought I'd sneak that question in.