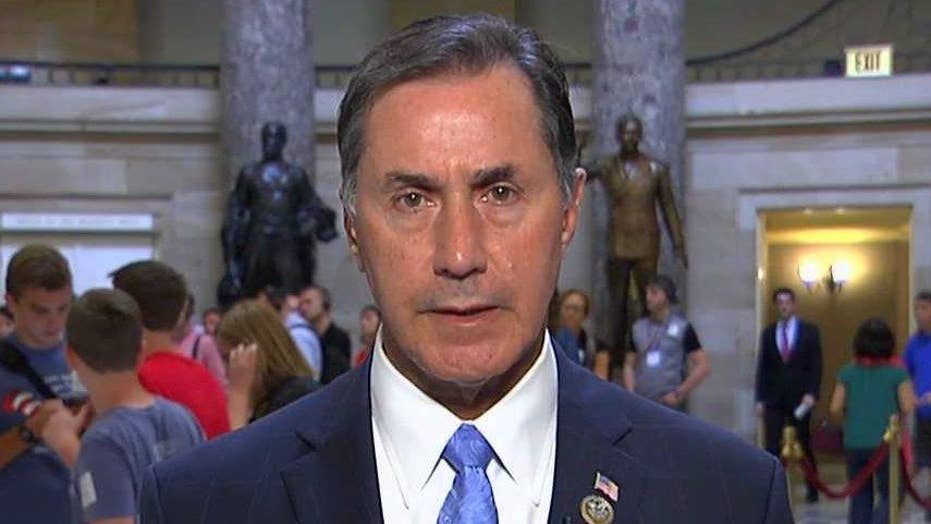 Rep. Palmer: We need to do health care reform in phases

On 'Your World,' Alabama congressman says lawmakers need to figure out a way to bring down premiums

This is a rush transcript from "Your World," July 13, 2017. This copy may not be in its final form and may be updated.

NEIL CAVUTO, HOST: To a fellow who has a lot at stake in all of this, watching it closely, Gary Palmer, the Alabama congressman, a member of that House Freedom Caucus.

REP. GARY PALMER, R-ALABAMA: Good to be on with you, Neil.

CAVUTO: You know, I was talking to Mark Meadows the other day. And he was saying, while he didn't like the fact that the Senate -- and at the time, that was the talk -- was thinking of keeping the taxes for the upper income, the investment taxes, Medicare tax, in effect, and still in place, he could kind of swallow it if it was a means to an end, a means to getting tax reform done and tax cuts in a larger sense done.

Are you in that camp?

PALMER: Well, I could be.

What I have said all along about the health care issue is that we need to do this in phases. And if we can move this out of the Senate, get it into conference and make some other adjustments, I'm willing to take what we can get.

I do think, at the end of the day that we have got to figure out a way to bring down premiums.

Now, what we're dealing with, though, is sort of like this battle between winning over moderates, as you know, and that kind of ticks off conservatives when that's done, because -- then whatever is done to win over guys like you ticks off the moderates.

And you get all these cynics who are saying there's no way in heck this is ever going to happen. If it doesn't -- and I know you're confident that eventually you guys can all come to an agreement and produce an alternative to ObamaCare -- what would you do? Would you just move past this, shelve it, and then go on to tax cuts, or what?

PALMER: I couldn't understand all that you were saying there, Neil. Say that again.

CAVUTO: Sure. Me, I barely understood it myself.

In other words, that they -- you move on to tax cuts even if this fails, if it does, if it does?

PALMER: Well, we're going to move on to tax cuts regardless.

But the thing with the health care bill is, is that I don't think anybody really wants to bail out on this. And I have said all along that, like I said earlier, we need to do this incrementally.

I would much prefer to pass legislation that we actually know what is in it, do it in phases, and if it something is not working, be able to come back to it later.

What I would like to see happen is the Senate move the bill out of the Senate, get it over here. Let's get it into a conference committee, make some adjustments-, and pass that, and then come back to the other issues that we need to deal with.

But, at the end of the day, what we have got to do is do health care reform in a way that reduces premiums, because that's what's driving the debate right now.

CAVUTO: All right, Congressman, thank you very, very much. We will see what happens there.