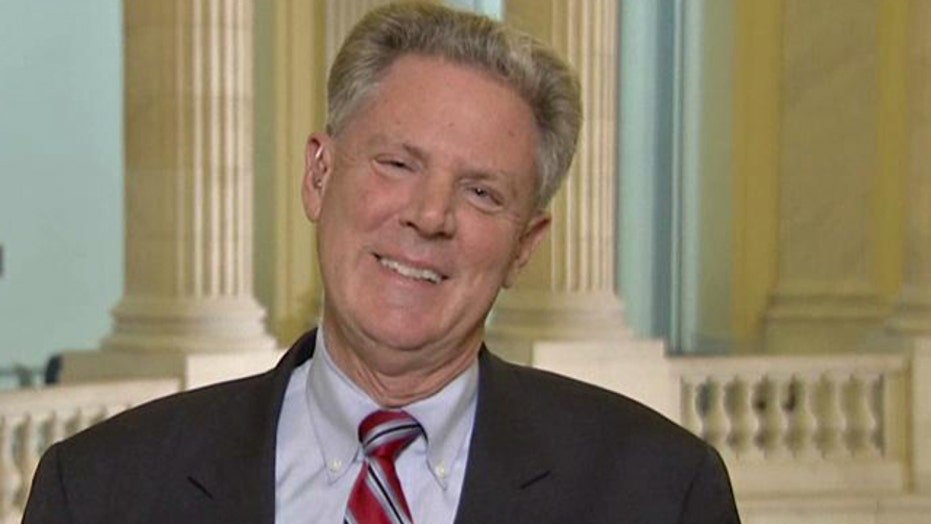 This is a rush transcript from "The Kelly File," October 30, 2013. This copy may not be in its final form and may be updated.

MEGYN KELLY, HOST: Joining me now, Democratic New Jersey Congressman, Frank Pallone. He's a member of the Energy & Commerce Committee. He was one of the lawmakers questioning the Secretary today. Congressman, thank you for being here.

KELLY: We're struggling to understand how Ms. Sebelius can say the president kept that promise. That specific one of if you like your healthcare you can keep it, period, I guarantee it, when we've seen 2 million Americans have policies cancelled so far. And the estimates are it will top 10 million.

REP. PALLONE: Well you can keep it as long as the insurance company agrees to continue to sell it. But the problem is a lot of insurance companies now have been caught because they're selling lousy plans at a high price that are skeletal and don't provide any benefits. So they are now cancelling those lousy plans. In which case many of them are just a scam and saying, look we're not going to sell this anymore because nobody's going to buy it. And therefore we'll try to get, we'll give you a better plan that has better benefits at a more affordable price.

So the president never said that he could stop the insurance companies from cancelling plans. This is a private market. This is a competitive market. They're not going to sell something they can't sell.

REP. PALLONE: They cancelled the policies --

REP. PALLONE: They don't have to sell them. It's a private market.

KELLY: Let me pose the question. Then you respond. Some of the insurance companies said, all right, I'm going to cancel the policies because that happens on the insurance market.

REP. PALLONE: That is absolutely not true.

REP. PALLONE: They have a right to continue the policies --

REP. PALLONE: She did not admit that.

KELLY: She did too.

KELLY: She was asked about whether --

KELLY: If they change the policies in any marginal way then ObamaCare requires that they be cancelled and the people get kicked off.

REP. PALLONE: No, that's not true.

KELLY: Yes. She was asked about this today by a $5 increase in the premium.

REP. PALLONE: It's not true. ObamaCare --

REP. WILLIAM CASSIDY: If coinsurance went up by any amount, even by a dollar according to your regulations that would not qualify as a grandfathered clause? Just to have that out there for the record. I gather even by a dollar.

HHS SECRETARY KATHLEEN SEBELIUS: Dr. Cassidy, I want to start by the amount that you gave is not accurate. I was told $5, not a dollar.

KELLY: So she's not saying, no, you're wrong. They can't cancel the people if the policy changes by five dollars. She's saying, yes you're right. If they up your premium by $5 it's cancelled, ObamaCare kicks in, the person gets a cancellation notice and they're wondering where to get their insurance.

REP. PALLONE: Look the bottom line is, they tell them where they can get the insurance. Look, the bottom line is, if you are selling a lousy policy at a price that's too high, nobody is going to buy it. And so they're cancelling these policies because they know people can't, won't buy them.

REP. PALLONE: It's a competitive marketplace.

KELLY: But they were buying them.

KELLY: They were buying them, there were 15 million people who bought them and said I like them Mr. Pallone I like them!

REP. PALLONE: But they're not going to buy them anymore when they have --

KELLY: Thanks to you.

REP. PALLONE: A better alternative that provides them -- I can't go out as an insurance company and sell a lousy policy anymore at a high price.

KELLY: You could. People like to, why do you get to decide what's lousy? Why can't the American people say it's lousy for you? For me, I like it.

REP. PALLONE: It's capitalism. You can go out and buy whatever you want, but the insurance company realizes they can't sell this lousy insurance policy anymore.

KELLY: But they were selling it sir. You're ignoring my point. They were selling it. 15 million Americans thought it was great. You didn't like it, but they liked it. And then you and the president came out and guaranteed people that they could keep it period. Period.

REP. PALLONE: Because there are better alternatives.

KELLY: When you make a guarantee --

REP. PALLONE: That gives you better insurance for a lower price. And that's what the Affordable Care Act offers. So that's why these insurance companies are cancelling because they know they can't sell that lousy policy anymore.

REP. PALLONE: Well it is true.

KELLY: It's not true.

REP. PALLONE: It is of course it's true. You deny it but, you know.

KELLY: Listen I appreciate you coming on.

KELLY: Thank you for coming on sir.

KELLY: Well the marketplace would like to decide but they have been told by the president and the Democrats thanks to ObamaCare they can't.

REP. PALLONE: No. It's a capitalist private market.

KELLY: Is it? The capitalist private market is controlled by laws including one called ObamaCare which imposed a bunch of regulations on them with which they must now comply sir.

REP. PALLONE: You can't sell the policy if nobody's gonna buy it because it's lousy. And that's what the insurance companies --

KELLY: But 15 million people did buy it! They bought it! And they were told they could keep it and now they can't and I've got to go, period. Thank you, sir. Thanks for being here.

I tried. I, it's so much better when you can have a real exchange on the actual issues. Anyway, listen, why don't you send me a tweet and let me know what you think.