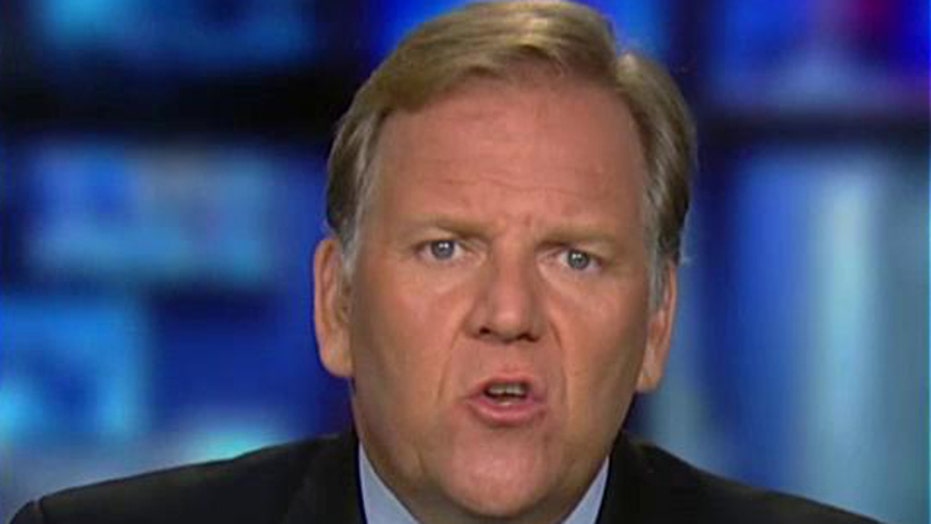 Rep. Mike Rogers on how US should act against ISIS

This is a rush transcript from "The Kelly File," August 27, 2014. This copy may not be in its final form and may be updated.

MEGYN KELLY, HOST: Congressman Mike Rogers is the chairman of the House Intel Committee. He's with me now. Mr. Chairman, is it the case, was the Intel community warning of the White House that this group was growing in its threat?

REP. MIKE ROGERS, R-MICH., HOUSE INTELLIGENCE COMMITTEE CHAIRMAN: Oh, clearly. And this has been going on for years. We watched a pooling of these jihadists in Eastern Syria and them establish a safe haven. And remember when they were first operating in Syria the ISIS group as we know it today, it was an Al Qaeda affiliate. So the other Al Qaeda group there, something called al Nusra was and is still associated with Al Qaeda, but they had a split. And this group took on a different name which was ISIS.

KELLY: But now what the administration's telling us after first last week, there was a terrifying press conference held by Chuck Hagel, our defense secretary, and General Dempsey, chairman of the joint chiefs saying, it's an immediate threat to the homeland in virtually every way. And then something happened over the weekend, they came out this week and said, oh, it's just a regional thing not to worry. But now we're thinking about bombing Syria. So you tell the viewers what is the truth.

ROGERS: The truth is that ISIS is a growing threat to the United States. You heard Oliver North talk about some of the numbers. But don't forget about Canada. They believe that there may be as many as 500 Canadians fighting. And you're just a car ride away from driving across that border and doing something to the United States. And, you know, countries like Morocco think they have 1,200. I think these numbers are low. Part of the problem is these folks are going with western passport who are going for Jihad. They're flying to separate countries and working their way into Syria. So we don't really know all of the individuals that are there. That's what's so alarming about this.

KELLY: How are we going to take care of is this? Because the report out today from our own James Rosen reported that top aides to President Obama expect that President Obama's second term will end without the United States defeating ISIS. I mean, it sounds like they're declaring defeat before we've even engaged in the battle.

ROGERS: Well, you know, we've seen this movie before unfortunately. When Syria was starting to go, our Arab league partners were calling the United States, they came here, they sent leaders here, they asked Congress, they asked the White House, hey, we need some help here. We don't need, you know, the 101st Airborne Division, we need intelligence, we need logistics, we need help in command and control. We need your leadership at the table and we think we can handle this. And the White House really turned their back on those conversations. And the longer it went, the worse it got.

And so our fear here is that this notion that if we just don't do anything, everything is going to be OK is going to continue. This is as dangerous a threat matrix as I have ever seen in my time on the Intel committee, which is about 10 years, Megyn. It is serious. We need to address it. And it's not just here, it's other places as well. But the Syria and Iraq portion of this present a new and unique opportunity for some really bad people to get back into Europe, to get back to the United States in a way that we hadn't seen before.

KELLY: Wow! That is a chilling assessment, Mr. Chairman. Thank you for being here.