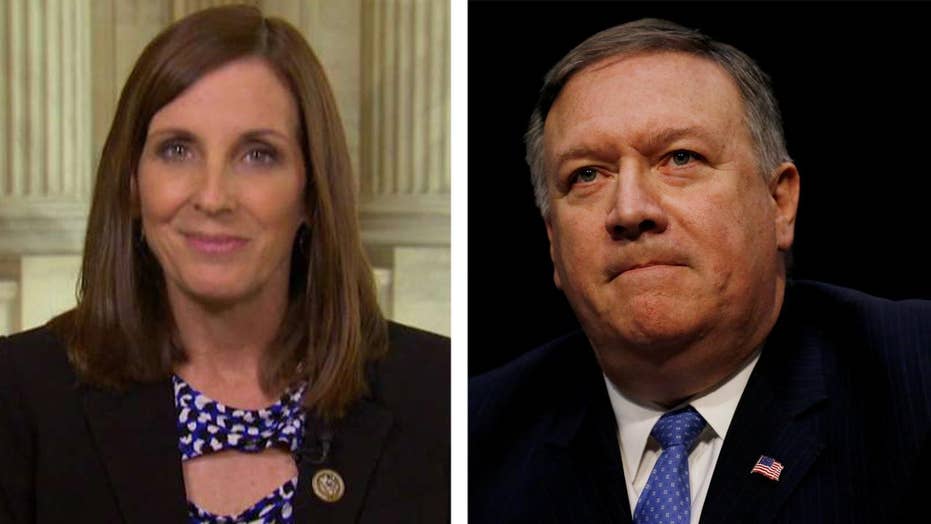 This is a rush transcript from "Your World," April 18, 2018. This copy may not be in its final form and may be updated.

DONALD TRUMP, PRESIDENT OF THE UNITED STATES: I think Mike Pompeo is extraordinary.

He was number one at West Point. He was top at Harvard. He's a great gentleman. I think he will go down as truly a great secretary of state.

The president very confident that his secretary of nominee, Michael Pompeo, will have enough Senate votes for confirmation, this on the heels of a meeting between Mike Pompeo and of course Kim Jong-un, the North Korean leader.

Congresswoman, thank you very much for taking the time.

CAVUTO: Is it your sense that this nomination will go through, first off? I mean, there's all sorts of parliamentarian efforts, I know, to bypass the committee in case there are problems there.

But one way or the other, Pompeo is our next secretary of state? What do you think?

You look at his record. And with the world burning right now and everything we're dealing with, he had a strong bipartisan vote for CIA director. The Democrats need to stop holding this up. We need a secretary of state more than ever.

He's already acting like a strong diplomat, looking at how he spent his Easter. So, I think it will go through. Unfortunately, they're blocking it in committee. But I think it needs to go through, and they will do whatever it takes in order to get him in that role.

CAVUTO: All right, now, not just Democrats, too, a number of Republicans, Rand Paul among them, very concerned about the aggressive posture Pompeo has taken in the past when it comes to foreign incursions and the like.

And he wouldn't have his vote. Now, we learn, maybe after a little bit of pressure from the president, that Rand Paul is going to meet Pompeo. I don't know what the full skinny is on that. But what do you think of that?

Well, everybody is entitled to their own vote. I would just tell you they have advice and consent in the Senate. And I think it's important to look at whether somebody is qualified and capable, and then support the president's selection for his Cabinet.

I mean, if you look at Mike Pompeo, look at his background, look at his experience, he's an extraordinary patriot. And we need him right now in these roles, if you see what's going on with North Korea, Iran, China, Russia. We can't be playing politics with this.

CAVUTO: What did you think of that meeting in North Korea, that Pompeo was there meeting with him in Pyongyang?

CAVUTO: Caught a lot of people off-guard, by surprise.

CAVUTO: But what do you think?

MCSALLY: I think it's pretty extraordinary.

I think it shows, again, bold leadership. The president is willing to crank up the pressure economically, to keep military options on the table, and to send Mike Pompeo into North Korea in order to have a precursor to the talks.

We have got to ensure that North Korea is -- the peninsula is denuclearized, that they stop their -- other malevolent activity with their missile programs and their exporting of terror and other things.

But it just -- I think it shows bold leadership. Insanity is doing the same thing over and over again expecting a different result. The weakness of the past in the Obama administration is behind us. And so I really applaud this move.

CAVUTO: Where do you think that meeting ultimately between the North Korean leader and our president should take place? It seems to be increasingly looking like the demilitarized zone between South and North Korea. Others have suggested different venues. What do you think?

MCSALLY: Yes, well, I know the administration is working through that.

And, you know, even North Korea I guess doesn't even have an airplane that can make it to some of the places. This is how weak they are as a country. So they will pick the right spot.

Again, I'm extremely skeptical. We have seen this before where they try to use talks as a stalling mechanism. But I know President Trump and his leadership team know that that has been used in the past and they are not going to let them get away with it.

So, it does need to happen. I'm actually heading over there next month myself to the DMZ and to visit the troops and to see firsthand what's going on.

MCSALLY: And, again, I applaud the efforts. But we have got to make sure we keep cranking up the pressure, don't let it off, while we work the diplomatic angles.