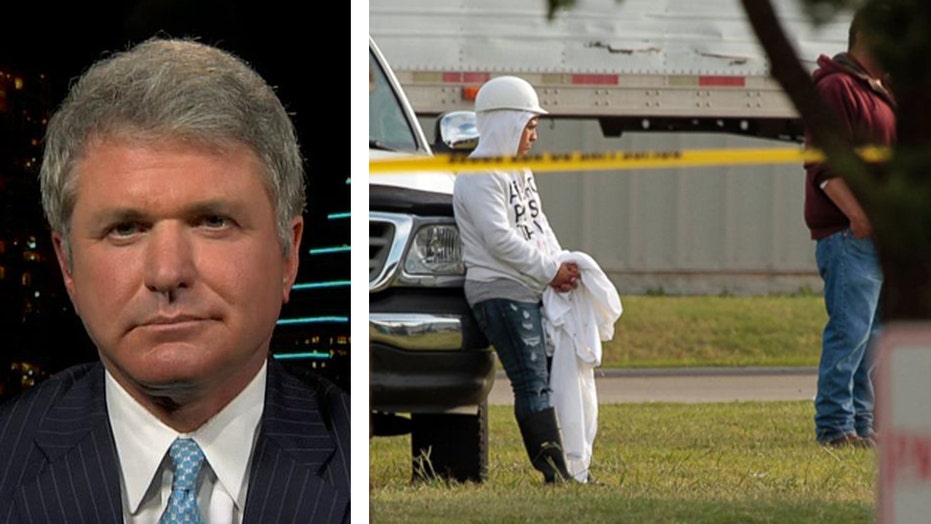 This is a rush transcript from "The Kelly File," September 29, 2014. This copy may not be in its final form and may be updated.

MEGYN KELLY, HOST: Joining me now, the chairman of the Homeland Security Committee, Representative Mike McCaul. Mr. Chairman, good to see you. And so, you tell me, when we're talking about this self-radicalization and homegrown lone wolf terror, will it look something different than this looks?

REP. MICHAEL MCCAUL, R-TEXAS, CHAIR, HOUSE HOMELAND SECURITY COMMITTEE:  This is exactly the profile that has us concerned, both Homeland Security officials and the Intelligence community. The FBI director testified before my committee -- look, we're combating ISIS overseas and the foreign fighters pose a great threat to the homeland. But this is one that has largely been sort of ignored by the administration, and that is the idea that someone can radicalize within the United States without even having to travel. And that's certainly what we saw with the Oklahoma suspect. It's certainly what we saw with Major Hassan at Fort Hood. And it is disturbing to me this narrative that all these seem to be workplace violence incidents when I think the American people see it for what it is. And that's a radical Islamist extremist act of terror.

KELLY: And they want us to believe that the man was posting pictures of brutal beheadings right next to jihadist propaganda and that it was a pure coincidence that that is how he chose to murder a co-worker when he was angry about being fired. People are not stupid.

MCCAUL: Well, you know, you look at his website postings filled with radical jihadist postings. One talks about why jihadists do what they do that came from sort of an ISIS website posting.

KELLY: Yes, and on it goes.

MCCAUL: And so, it's clear there's a lot out there that we don't know about yet. The FBI's doing a full investigation. And, you know, but it's very clear to me at this point in time that he was a radicalized Islamist that did the same tactics we're seeing overseas. But we don't want to see more of this in the United States.

KELLY: We don't. So here's the question, because these people get self-radicalized in large part via what they see online. This is a country with a Bill of Rights, with the First Amendment free speech. Do we start curtailing that in the case of jihadist propaganda online?

MCCAUL: Well, we still have a Constitution. I think we have to respect that. But can we do a better job? Can this administration do a better job countering violent extremism? Yes. I intend to connect to oversight the have the administration focus on this issue. We know the FBI is monitoring public websites for this type of information. But there's no real plan or strategy I think that's effective enough at this point in time to counter this threat. We could see a whole new wave of terror within the United States with just these radicalized individuals that are already here not have to wait for them to come back from Syria.

KELLY: In the same way they can track people who view child pornography. There's got to be a way to track people who venture into the darkest corners of the Internet with, you know, the jihadist ideology, although you're walking a very fine line there.