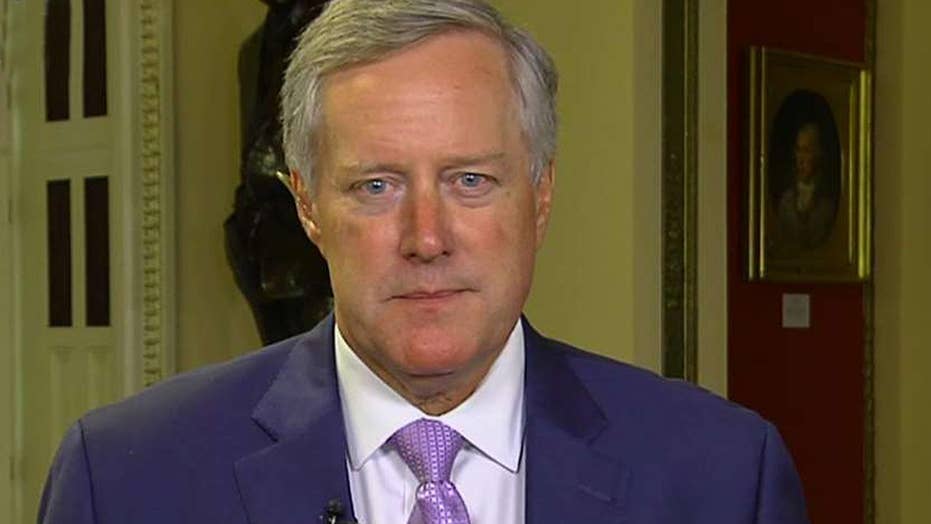 This is a rush transcript from "Your World," September 27, 2017. This copy may not be in its final form and may be updated.

NEIL CAVUTO, "YOUR WORLD" HOST: So, the battle royal is on.

As you heard, a lot of liberals are not keen on this. A lot of conservatives too were concerned about losing some of the deductions and saying that justifying or paying for a tax cut package takes away the whole reason why you have one, to spur the economy.

A lot of them use what they call this dynamic accounting, that you will get a great deal of bang for the buck from something like this.

Among those groups that espouses that, largely supply-siders, the sort of new Reaganites, if you will, is the Freedom Caucus.

Its chairman, Mark Meadows, joining me very, very shortly here. The gist of what the Freedom Caucus has been saying, and, by the way, stands behind this tax effort, is that you will get a good deal of bang for the buck by these tax cuts and they will pay for themselves future years.

Mark Meadows, the chairman, with us right now.

REP. MARK MEADOWS, R-NORTH CAROLINA: Hey, it's great to be with you, Neil. Thanks so much.

CAVUTO: What do you think of this?

MEADOWS: Hey, it's a great day, not only here on Capitol Hill, but it should be a great day from coast to coast, because we're not only moving forward on tax reform, as I told you many months ago that we would be doing, but we're actually being aggressive and bold about it.

There was the tendency maybe just a few weeks ago to do something that would, I believe, be very anemic for economic growth. And yet what we're going to see is not only what was rolled out today, but the coming details that will actually get our economy going again.

And we're excited about that. The Freedom Caucus, as you know, has come out in support of the framework, but also in support of moving the budget that opens the gate, where we can start to deal with this.

CAVUTO: All right, so it's safe to say that your views represent all the member views, the 30-plus of you conservative members? They're all in synch on this, and at least what they see now, they like now?

MEADOWS: Well, it's even more than that.

And so I believe there's more than enough votes to move the budget along. It should be good news for all of those who have been waiting too long for tax reform. But we're excited about what we're going to see in terms of really tax cuts and reform going along on parallel tracks.

CAVUTO: You know, a group called the Blue Dog Coalition, as you know, Democrats, but more in mind-set of working with Republicans when they can, of course, Ronald Reagan famously got them along to support his tax cuts or a group that was like that, the Boll Weevils at the time.

CAVUTO: Anyway, they had an interesting take, Congressman, saying, "Blue Dogs want a real seat at the negotiating table, so we can work with Republicans and Democrats to produce a tax reform bill that is fiscally responsible, provides relief to the middle class, and spurs economic growth."

On this, they have their doubts. And they mentioned, in an environment in which the debt has just surpassed $20 trillion, you have to be cognizant of that.

MEADOWS: Well, you know that, obviously, I'm a big deficit hawk. I believe that we have got to make sure that we manage it at $20 trillion.

I don't know that anybody from the Blue Dog Caucus would be to the right of me in terms of deficit. And yet, at the same time, we have to understand that we have got to do two things. We have got to grow our economy and control our spending.

Now, some people love to make sure that we don't cut the rates enough to create that economic growth, but they forget the spending part of it, Neil. And you have got to do both.

And I can tell you, I have had a number of great discussions with moderate Democrats on tax reform. The devil is going to be in the detail. But this is all about give-and-takes.

And it's about giving back to the American taxpayer and taking some of those special interest loopholes away. And so this plan does that. We're excited about it. I'm looking forward to being able to put it on the president's desk by Thanksgiving, as long as we continue to stay vigilant and make sure that we do that.

CAVUTO: Besides the dynamic accounting, or whatever you guys call it, to bring in more revenue in the later years, the only thing that I see on the table so far, Congressman, is this idea of removing the deduction for state and local taxes, which, depending on the math, could shave $1.5 trillion over 10 years.

But you would need a couple of trillion more, at a minimum, right, to justify this, if you're in the camp that says pay for tax cuts. What other ideas do you have?

MEADOWS: Well, I can tell you, what we're going to end up doing on this is, the more aggressive we are on those tax cuts -- and you mentioned about revenue-neutral, and certainly the dynamic scoring is what you were talking about.

MEADOWS: That dynamic scoring is important, because it's really what happens for business cuts.

I was a small business guy. And when you allow me to invest more dollars back into my business or into higher wages and making sure that I'm more productive, it produces not only an effect on my employees, but on everything that they buy and purchase.

And so what we're probably going to be looking at is a short-term increase in the deficit for long-term gain on that. We're looking at some offsets. So, it's not just state and local.

MEADOWS: There are probably some other changes that we're looking at in terms of really some expensing models in terms of what you can expense, that the details of those will come out in the coming days.

But, additionally, Neil, I want to stress, we have got, some would suggest, almost $3 trillion in foreign earnings sitting abroad that are being invested over there. You and I both know that we need to repatriate some of those earnings, allow that to come that.

CAVUTO: And you're confident a good chunk of that could come back.

But there is this sort of other issue out there, Chairman, and that is the idea of the rich and whether they get a tax cut at all. I know the top rate under this plan has been reduced from 39.6 to 35 percent.

There is the possibility, though, that there would be a fourth rate that would make sure the very rich, whoever is that, would not get off scot- free.

MEADOWS: You know, in terms of income levels, we have ranges right now, so there's nothing in concrete.

That was actually -- whether we go with a fourth rate and where those come in was a major topic of discussion today when we had our retreat. And those are still -- there are some of the levers that can dial back.

CAVUTO: But let me ask you.

CAVUTO: Do you think that rate should be higher, lower, what?

MEADOWS: I think where we have it right now, at the 35 percent and then moving it down to 12, because, actually, what we have done is move those that were paying 10 percent to zero, that we can certainly work it with the income levels that are there and make that work.

MEADOWS: And you and I understand what it means to be a pass-through, but it actually means that you're going to be able to invest more in small businesses.

And so, as we look at all of those, putting those together, I can tell you some of the details that have been shared that perhaps are still negotiating, for example, on repatriation. I was a big one that thinks that we need to bifurcate that. We have one rate for cash, one for assets.

MEADOWS: That is going to happen.

And so as we look at those two rates, I don't see anything in this at this point to get all worried about, in fact, just the opposite. I think we're going to be able to grow our economy at a three-point GDP growth or better. But we have to get busy and actually deliver.

CAVUTO: Mark Meadows, the man who runs the Freedom Caucus, very, very influential player in all things fiscal, thank you very much, Congressman. Good seeing you.