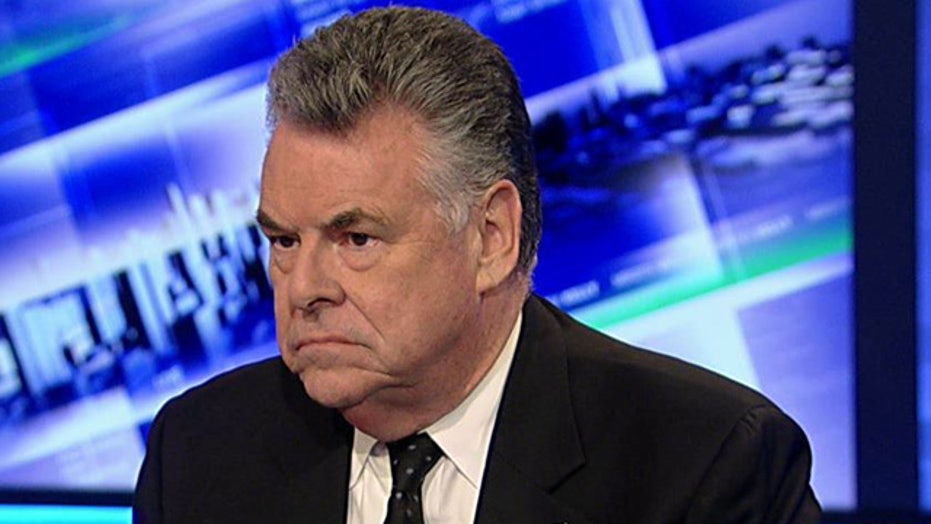 Rep. King on Malaysia's lack of cooperation in jet probe

This is a rush transcript from "The Kelly File," March 18, 2014. This copy may not be in its final form and may be updated.

MEGYN KELLY, HOST: Breaking tonight, new information on missing Flight 370, shifting now, new suspicion on to the co-pilot. We are hearing that when the 27-year-old co-pilot radioed his final "good night" communication to air traffic control, that plane had already been diverted from its flight path, but there was no mention of that by the co-pilot to anyone on the ground.

Joining me now, Republican Congressman Peter King, who is chairman of the Counterterrorism Subcommittee on the House Homeland Security Committee. And you have been saying look at the pilots from the beginning, more so than everybody has. I mean, everybody of course knew that that was one option. Why? Why were you zeroed in on them?

REP. PETER KING, R-N.Y., HOUSE HOMELAND SECURITY COMMITTEE: Most people I spoke to in the airline industry, felt this plane odds are, again, not knowing what happened, but overwhelming odds would be that that had to be an inside job. Someone from the inside either -- someone who took over the plane or the pilot and/or the co-pilot. All the other explanations were really too much off the playing field. So, I felt the suicide or its terrorist attack by someone within the cockpit.

KING: My conversations have been leaning toward, happening within the cockpit, either terrorism or suicide.

KELLY: OK. So, not pure mechanical failure. How close contact do you believe we have with the Malaysian government and do you think that they are cooperating with us the way they need to be?

KING: No, it's really been terrible. I mean, they've not cooperated. And just the fact that they took seven days before they even began to look at the pilot and co-pilot is inexcusable. Any time you have an incident like this, you have to assume whether it's true or not, the pilot and the co-pilot have to be looked at as possible suspects and we begin an automatic and investigation, especially in a country like Malaysia which has such a strong history of Al Qaeda activity. Not to say they're terrorists, but it's something you have to look into. The fact that they never brought FBI in, Interpol in, Australian intelligence. All of these groups could have assisted them in going through the backgrounds of the pilot and the co-pilot.

KELLY: They said that they have investigated the pilot and the co-pilot, they searched their computers, they didn't find anything nefarious, no terrorist links, they've searched their cell phone records, nothing of question there. This guy, the co-pilot 27, engaged to marry his girlfriend of nine years, she is also a pilot herself. He was recently qualified to fly this aircraft. And you know, he had that incident of inviting some young blonde women into the cockpit. But the pilots I've talked to said, you know, that's not a big deal. They seemed to be saying there's nothing in this history that would red flag him or the other pilots for that matter.

KING: You can't tell that after one week investigation. And yes, we're talking about Malaysia. They didn't begin the investigation until Saturday. They're saying, between Saturday and today, they've given them a clean bill of health. I don't see how you can do that. I mean, you know, you've been involved practicing law, you have to investigate, and investigate, and investigate. And that's what they should have been doing. Drilling down and bring an expert, experts like the FBI for instance or MI5 or MI6 or Australian intelligence, bring them in to work with them. Instead they didn't even look at themselves or also didn't bring in anyone from the outside to help them.

KELLY: And you have to ask why. Congressman Pete King. Good to see you.